In a world where one in four people still don’t have access to clean drinking water — a disproportionate amount of whom reside in poverty-stricken areas — scientists have been steadily coming up with ways to purify wastewater so it can be added back to humanity’s fresh water supply.
The Centers for Disease Control and Prevention, for instance, writes that inhaling hydrogen sulfide could lead to symptoms like difficulty breathing, tremors, eye and skin irritation, loss of consciousness and, at high concentrations, even death. You just need to be close enough to the chemical to breathe it in, meaning onsite workers at wastewater treatment plants are right in the line of fire.

Wastewater treatment produces toxins, but scientists think they can turn them into treasure.

Typically, per the study, scientists try to tackle the sulfide problem by using certain chemicals to separate the sulfur derivatives into non-toxic components. But that, the researchers say, often corrodes purification system pipes, thus lowering overall effectiveness of clean water generation.
One mechanism, dubbed anaerobic filtration, has been leading the charge as it uses very little energy to convert lots of sewage water into a consumable form. But there’s a glaring issue. While cleaning up water, anaerobic filtration tends to create dangerous byproducts called sulfides. These are extremely harmful to our health and pollutive for the environment.
The team behind the new study, on the other hand, deals with the sulfides by employing what’s called electrochemical sulfur oxidation. “The process I’m working on is to convert sulfides in wastewater electrochemically into something more valuable, for example sulfuric acid, which can be used in many manufacturing processes and also fertilizers,” Xiaohan Shao, a Ph.D. student in civil and environmental engineering at Stanford University and lead author of the study, said in a video overview of the study.
“We are always looking for ways to close the loop on chemical manufacturing processes,” Will Tarpeh, an assistant professor of chemical engineering at Stanford University and senior author of the study, said in a statement.
“We can integrate our process into other advanced wastewater treatment technologies to [make] the gap between wastewater and drinking water smaller,” Shao said in the video overview. “And in terms of the chemicals we produce, we are adding these recovered products to the supply chain and it’ll help with agriculture — and in manufacturing, you’ll [reduce] raw material consumption.” One among the cadre of scientists aiming to address water shortages worldwide, some of whom are focusing on self-contained solar panel systems that pull water out of thin air, Shao remarked, “Hopefully, this study will help accelerate adoption of technology that mitigates pollution, recovers valuable resources and creates potable water all at the same time.”
Zeroing in on this pressing dilemma, in a paper published Wednesday in the journal ES&T Engineering, Stanford researchers reveal a way of reframing the so-called cost of anaerobic filtration as a hidden treasure. Not only did the team develop a fascinating way to translate wastewater-based toxic sulfides into safe compounds but also into highly valuable resources for agricultural and rechargeable technologies.
Unlock the biggest mysteries of our planet and beyond with the CNET Science newsletter. Delivered Mondays. 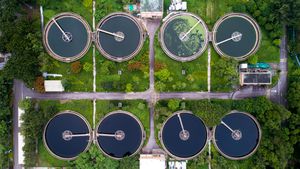