That is what Lithuanian illustrator and storyteller Monika Vaicenavičienė contemplates in What Is a River? (public library) — part prose poem and part encyclopedia, exploring the many things a river is and can be, ecologically and existentially. 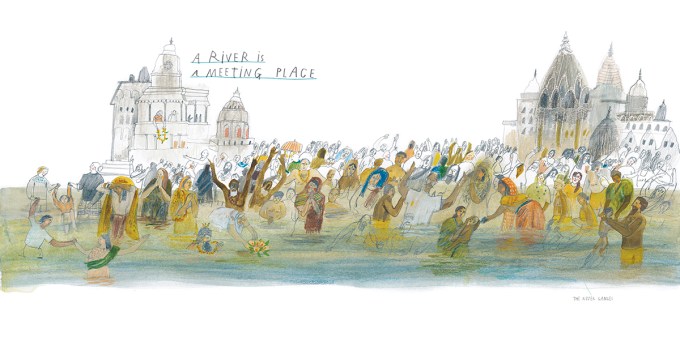 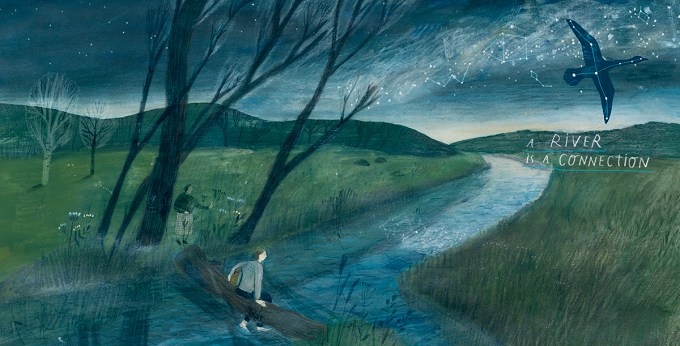 Myth and fact converge into a larger reflection on the ceaseless flow of existence, linking the Ancient Greek myth of Oceanus — the great river encircling the Earth, from which the word ocean derives — with the ecological reality of Earth’s immense, interconnected, ancient system of water circulating through the atmosphere and pulsating through the biosphere.
We see the river as a habitat, to creatures as various as the hippo and the heron, the dragonfly and the platypus. 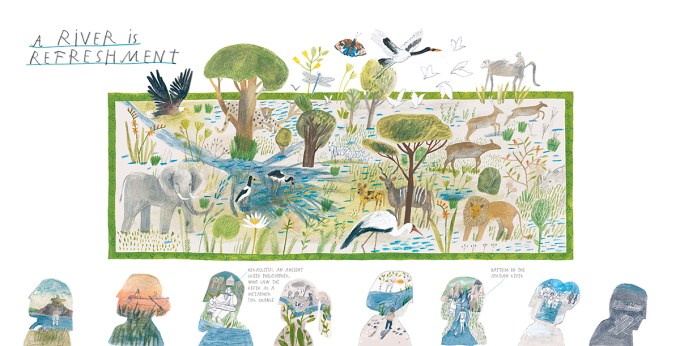 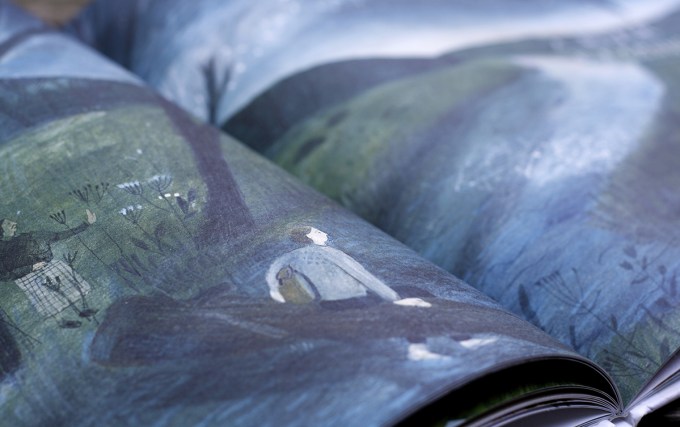 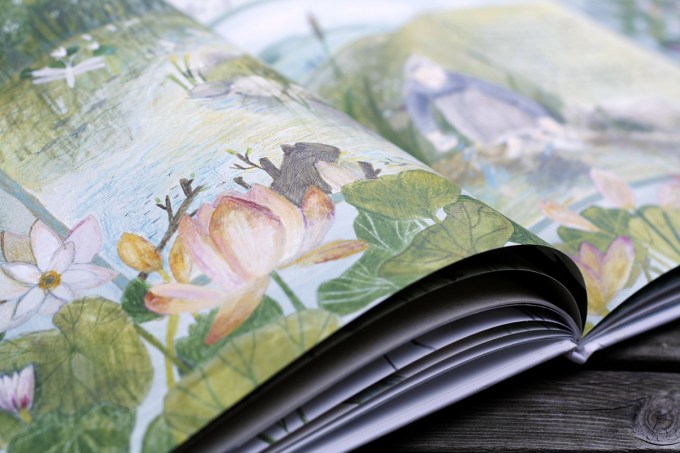 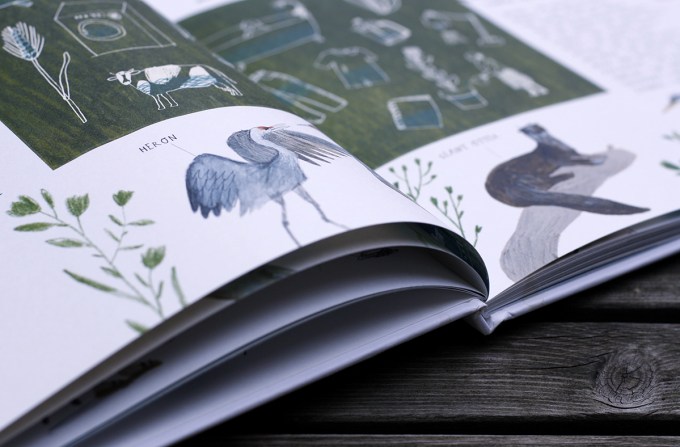 “There is a mystery about rivers that draws us to them, for they rise from hidden places and travel by routes that are not always tomorrow where they might be today,” Olivia Laing wrote in her stunning meditation on life, loss, and the wisdom of rivers after she walked the River Ouse from source to sea — the River Ouse, in which Virginia Woolf slipped out of the mystery of life, having once observed that “the past only comes back when the present runs so smoothly that it is like the sliding surface of a deep river.”
Complement What Is a River? with Italian artist Alessandro Sanna’s watercolor serenade The River, then revisit poet, painter, and philosopher Etel Adnan on the mountain as a lens on the meaning of life.
We see the river as a meeting-place, a muse, a name-source of countries and people, a sensory landscape, an emissary of deep time.
A bubbling spring, a gap in a glacier, a boggy marsh, a silent lake — a river can begin anywhere.

The narrative weaves in the encyclopedic — geology and history, curious statistics about famous rivers — but fact and feeling remain entwined in the poetic.
Rivers are the crucible of human civilization, pulsating with the might and mystery of water, their serpentine paths encoded with the precision of pi, their ceaseless flow encoded in our greatest poems. 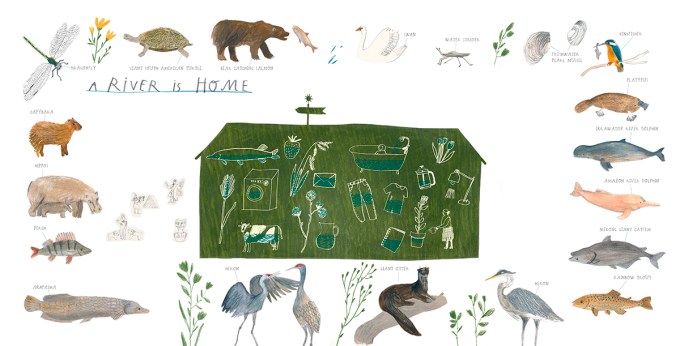 We see the river as home, called to imagine how many human lives the Nile touches in a single day along its 4,100-mile meander across Africa, or the Danube across the ten countries it traverses in Europe (my own native Bulgaria among them).
A river is a journey. 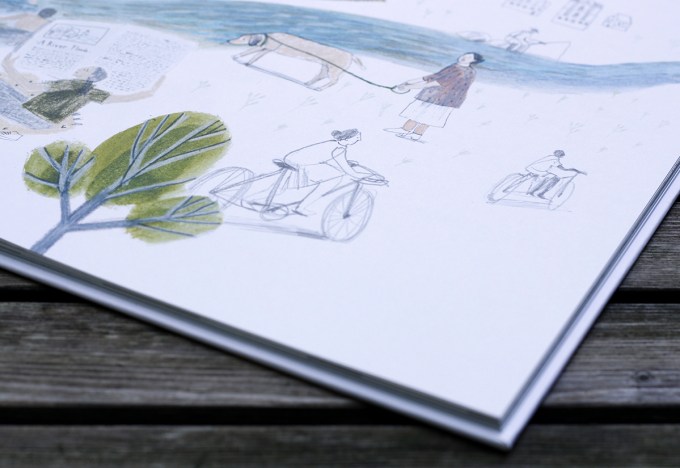 The story begins on the banks of a river, with a little girl picking flowers — “every flower has a meaning” — and watching her grandmother sew. What unfolds is framed as the grandmother’s answer to the girl’s question of what a river is: 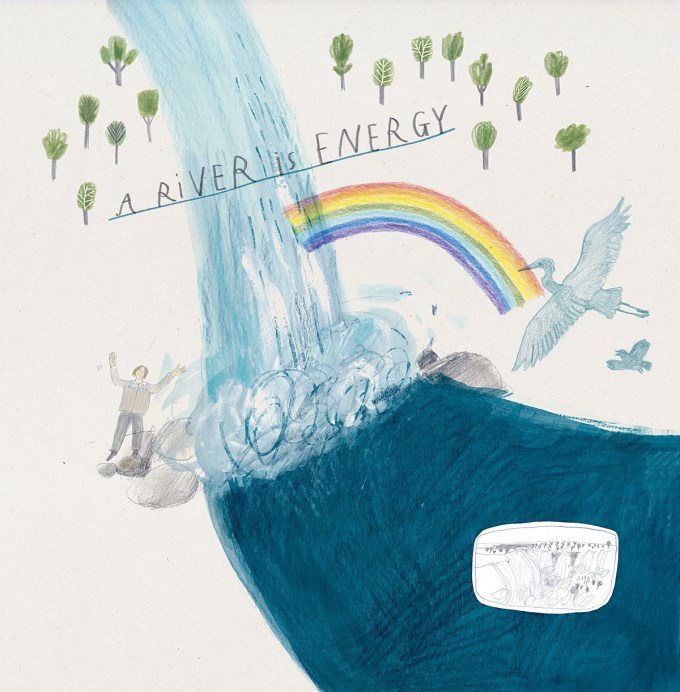 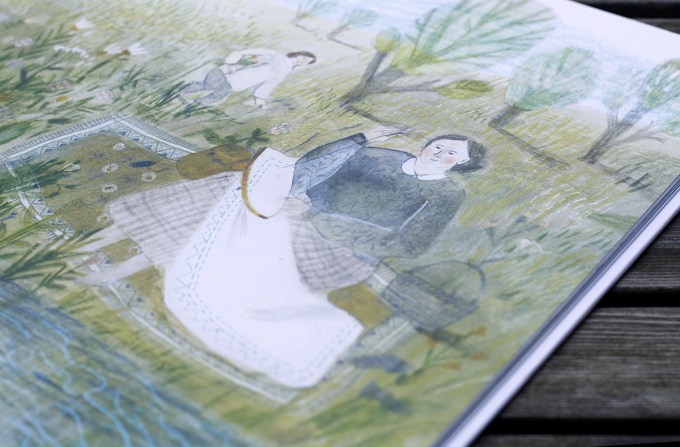 A river is a thread.
It embroiders our wold with beautiful patterns.
It connects people and places, past and present.
It stitches stories together. 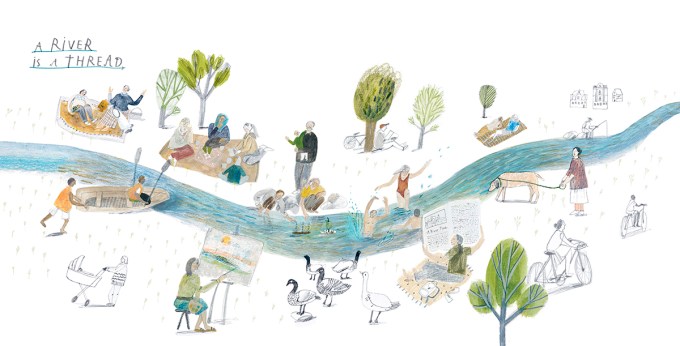 Illustrations courtesy of Enchanted Lion Books; photographs by Maria Popova
But what is a river?
A river travels to many places: prairies and cities, dense forests and lush meadows, steppes and tundra, mountains and valleys. It travels through heat and cold. It leaps from dizzying heights, cascading down as a waterfall. It slinks lazily through marshes. Suddenly, it twists, then meanders. It creeps underground. It carves canyons out of mountains, reducing rock to sediment. 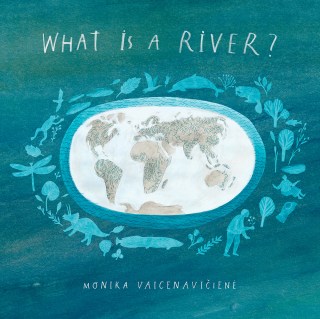 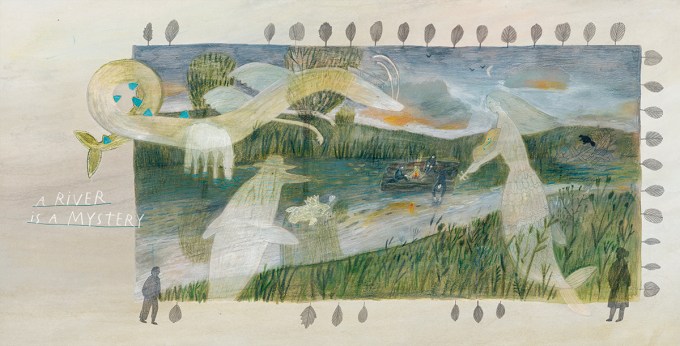 “Time is a river that sweeps me along, but I am the river,” Borges wrote in his timeless refutation of time.