First, we classified the formal methods used in the papers as falling into a number of broad families. On one hand, there was a “logic family” (with logic, modal logic separately, and set theory); on the other, there was a “probability family” (with probability theory, decision and game theory,  statistics, and causal modeling). Any given paper could be classified as falling into just one of these families, into both, or into neither. 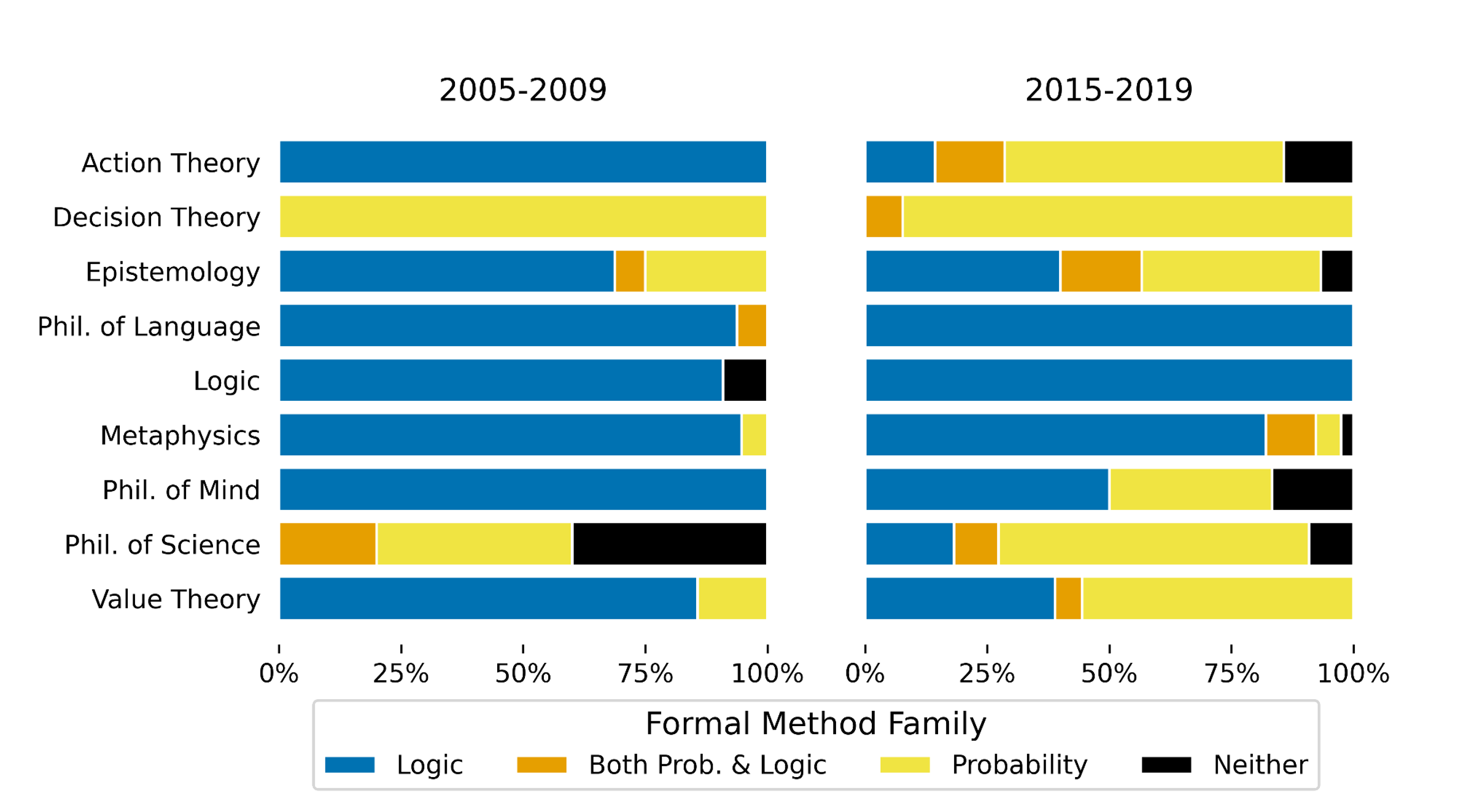 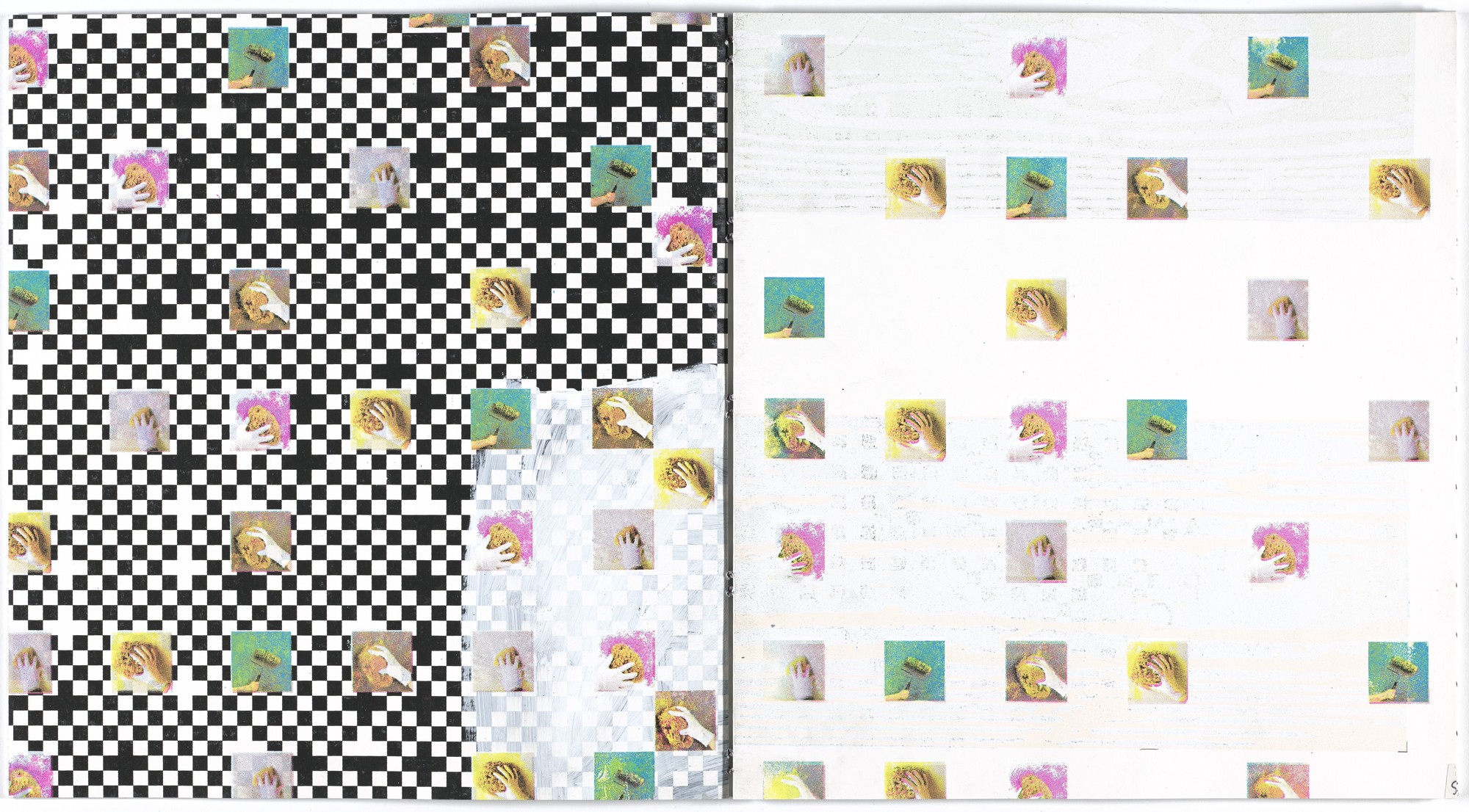 To get some information about this question, we picked one specific philosophy journal (Philosophical Studies) and looked at the change over time in the papers within that journal. We coded each paper for whether it used formal methods, and, if so, which formal methods it used (e.g., logic, probability theory), what subdisciplines of philosophy it belonged to (e.g., epistemology, philosophy of language), and the level of complexity of its usage of formal methods. In total, we coded and analyzed approximately 900 papers. (For more detailed information about the methods and statistical analyses, see the paper itself.)
In a new paper, we report the results of a quantitative study that provides information about this question. We looked at papers from recent years (2015-2019) and compared them to papers from a decade earlier (2005-2009). The aim was to figure out whether the use of formal methods in philosophy has changed over that time period.

[Laura Owens, untitled (2016)]
A few decades ago, the use of formal methods in philosophy was dominated by a small number of closely related techniques. Above all, philosophers were concerned with the application of logic. Indeed, to the extent that philosophers turned to other areas for formal tools to conduct their research, it was often to areas that were intimately connected to logic (e.g., set theory).
The authors are curious about the causes of this change; discussion is especially welcome on that, as well as on whether the change they describe is related to other relatively recent trends in philosophical thinking and methodology.
If our data is representative of the philosophy literature, then the use of formal methods in philosophy changed starkly over the course of just a single decade. This change includes a sharp increase in four different probabilistic methods (probability theory, decision theory and game theory, statistics, causal modeling) across four different subdisciplines (action theory, epistemology, philosophy of mind, value theory). We don’t fully understand why this would be the case and would be interested to hear from readers about why this might be happening.
We also don’t know whether this trend, if it is real, will continue in the decades to come. However, if things were to continue to change at even roughly the pace they seem to have been changing over the past decade, probabilistic methods would soon overtake logic-based methods to become the most frequently used formal methods in the discipline of philosophy.

As the figure shows, the proportion of papers falling into the logic family remained relatively constant over time, but the proportion of papers in the probability family changed dramatically. In the more recent years, there were three times as many papers using probabilistic methods as there were a decade earlier.
“If our data is representative of the philosophy literature, then the use of formal methods in philosophy changed starkly over the course of just a single decade.”
We then broke down the broad probability family into more fine-grained categories to look at different formal methods that make use of probabilities (probability theory, decision theory and game theory, statistics, causal modeling). We looked separately at the change over time for each of these separate methods.
In the following guest post*, Samuel C. Fletcher (University of Minnesota), Joshua Knobe (Yale University), Gregory Wheeler (Frankfurt School of Finance & Management), and Brian Allan Woodcock (University of Minnesota) discuss the findings of their research into relatively recent changes in the use of formal methods by philosophers. 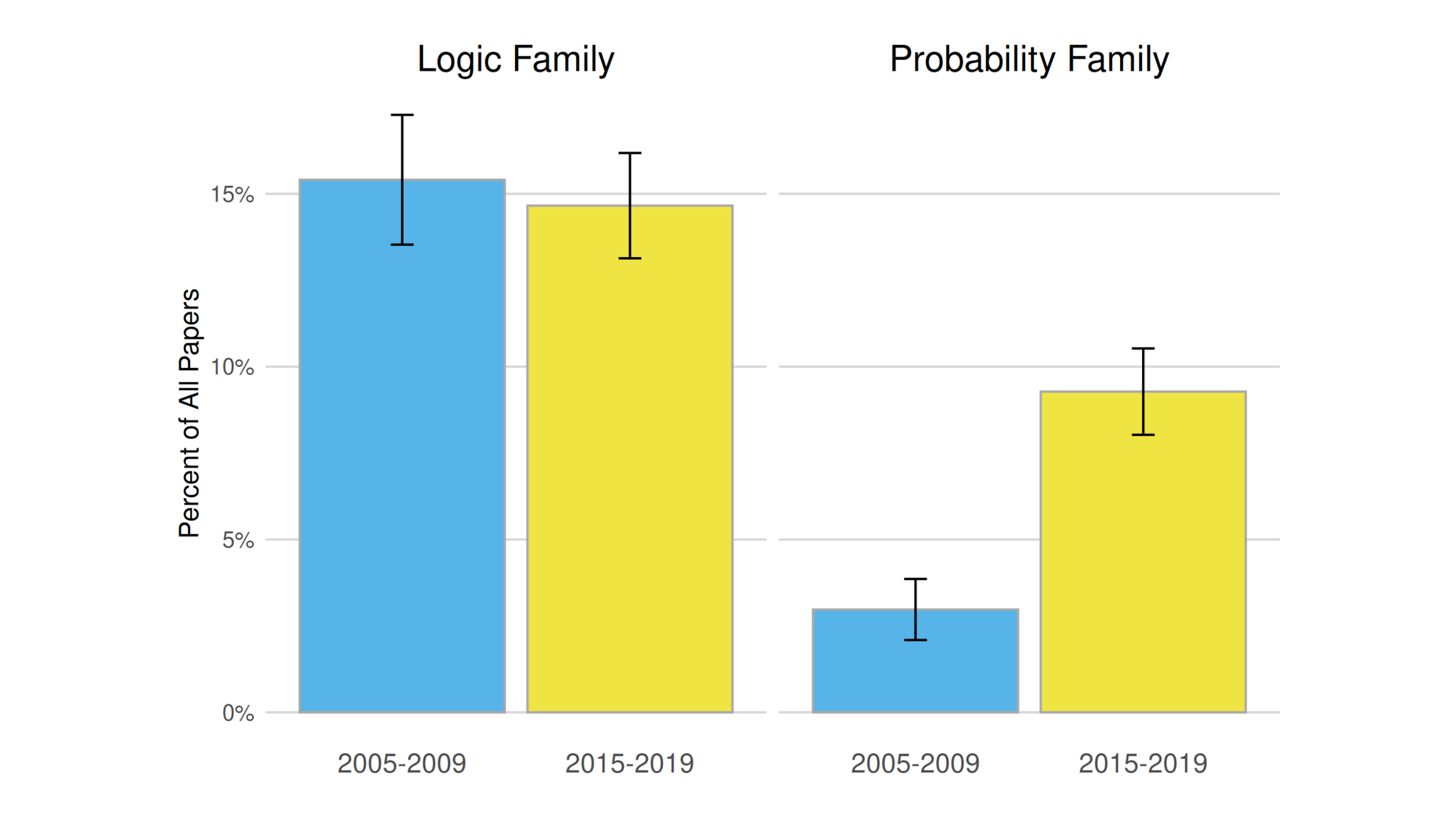 As the figure shows, we find a sharp increase for each of the individual probabilistic methods. Comparing the more recent years to a decade earlier, we find that there is now around six times as much use of decision theory and game theory, five times as much use of statistics, and so forth.
Here is the change over time from the 2000s to the 2010s within each of the two families:
Next, we broke things down in a different way, dividing up the papers by subdisciplines of philosophy. Like with the methods, individual papers could be classified as belonging to more than one subdiscipline. This approach makes it possible to see whether the change over time was driven by one specific subdiscipline (say, just by epistemology) or whether it was more pervasive.