Maria said “yes.”
They were married on February 7, 1857, and remained together until her untimely death of tuberculosis seven years later. Under the auspices of Maria’s love, Fyodor Dostoyevsky became the eternal voice singing in the cathedral of literature.
But then, in an act of extraordinary moral grandeur — “I love her happiness more than my own,” he wrote — he asked his friend, who was also his sometime-patron and a man of influence, to intercede on the young schoolteacher’s behalf and push forward his application for a raise that would double his salary. “She must not suffer. If she marries him, then let there be at least some money.” Later, Dostoyevsky would transmute this gesture into a story-line in his 1861 novel The Insulted and the Injured. “This is all for her, for her alone. If only so that she wouldn’t be impoverished,” he told his friend.
They remained in weekly correspondence. A hope swelled in his heart that he might have his chance at hers.
Love in such a guise is an illness. I sense that.
Upon his release, the thirty-three-year-old Fyodor remained in Siberia, destitute and directionless, trying to restart his life. He befriended a Russian expatiate working as a minor local official — a painful alcoholic who was nonetheless “an intelligent, educated, and good man,” and whom he came to love as a brother. He had a wife, Maria, and a seven-year-old son. They welcomed him into their home as part of the family while he struggled to find his footing. Maria took a lively interest in his conversation and a great pity in his fate, this young and desperate man heavy with unhappiness and savaged by epilepsy.

I am getting married… Nobody but this woman will be able to make me happy. She still loves me… She loves me. That I know for certain. I knew it then, too, when I wrote my letter to you last summer. She soon lost faith in her new attachment… Oh, if only you knew what this woman is!
I love her madly, more than before. My longing for her would have driven me to my grave and literally reduced me to suicide, if I hadn’t seen her… I know that I’m acting imprudently in many ways in my relations with her, since I have almost no hope — but whether there’s hope or not — it’s all the same to me. I don’t think about anything else. If only I could see her, hear her! I’m an unfortunate madman!

If you knew what an angel she is… every minute something original, sensible, witty, but paradoxically too, infinitely good, truly noble — she has a chivalrous heart: she will do herself in.

He proceeded to catastrophize with a panoply of possible hurts the young man could inflict on Maria’s way. “My God — my heart is breaking,” he wailed on the page, extolling her worthiness to his friend, intimating the other man’s unworthiness of her:
I’ve loved this woman for a long time, insanely, more than my own life. If you knew her, this angel, then you wouldn’t be surprised. She has so many wonderful, excellent qualities. She is intelligent, sweet, educated, as women rarely are, with a meek character… My friend, dear sister! Don’t object, don’t be sad, don’t worry about me. I couldn’t have done anything better. We make a good couple… We understand each other, we are of the same inclinations, rules. We have been friends for a very long time. We respect each other, I love her.
Fyodor wrote to his friend, in whom he had first confided of his love:

I saw her! What a noble, what an angelic soul! She cried, and kissed my hands, but she loves another. I spent two days here. In those two days she remembered the past and her heart was again turned towards me. 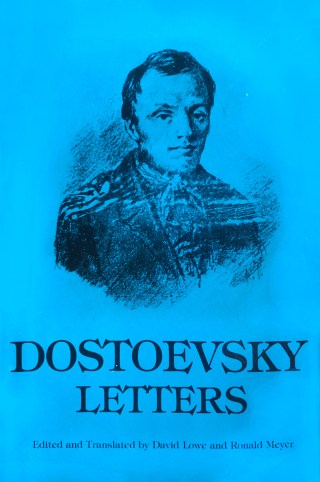 The seasons turned, but his resolve was only growing stronger. On the cusp of winter, living up to the drama of the nineteenth-century Russians, he was writing to his friend again:

But by the time he arrived home, a letter awaited him. Maria loved the other man more than him. He was crushed. “I don’t know what will will become of me without her,” he told his friend, then added: “I am done for, but she is too.”
What he dared not tell her was that he was deeply in love with her. But Maria — a woman of bright intelligence and passionate curiosity — had already guessed it.
Fyodor Dostoyevsky (November 11, 1821–February 9, 1881) was twenty-seven when he was arrested for belonging to a literary society deemed dangerous by the tsarist regime and sentenced to death. His sentence was repealed at the last moment, prompting him to pen an ecstatic letter about the meaning of life that evening. But he was not set free — instead, he served four years in a hard labor camp in Siberia.

He was unsure whether he could trust what he felt to be true, but when she beckoned him not to be sad, not to cry, because “not everything is decided yet,” he clung to her words like a drowning man. For two days, he was plunged into “unbearable bliss and torment.” He left with “complete hope.”

She is 29 years old; she is educated, a bright girl who has seen the world, knows people, has suffered, has been tormented, ill from the last years of her life in Siberia, who is searching for happiness, is self-willed, strong, she is now ready to marry a 24-year-old youth, a Siberian who hasn’t seen anything, doesn’t know anything, who is barely educated, who is beginning the first idea of his life… without significance, without a place in the world, with nothing, a teacher in a provincial school… Who knows how far the discord, which I unavoidably foresee in the future, will go; for even if he were an ideal youth, he’s nevertheless not a strong person. And he’s not only not ideal, but… Anything might happen later on.

And then, with helpless self-awareness, he added:

Mixing a jilted lover’s sorrowful unreason with reasonable concerns, he worried that the young schoolteacher was unsuited for Maria, intellectually and spiritually, and unable to provide for her and her son. He wrote to his friend:

It came as a shock when, a year later after her husband’s death, Maria announced that she was to marry a Siberian schoolteacher five years her junior, poor and uneducated. Immediately, Fyodor cobbled together some money to make the 1,700-mile journey across the tundra to see her. He recounted what happened in an electric letter to his closest friend, writing the summer before his thirty-fifth birthday:

Despite being deeply in debt himself, he kept cobbling together funds to go visit Maria, hoping she would change her mind. The long journeys worsened his epileptic attacks, which leveled him bodily and mentally, leaving him in “despondency and a state of psychic abasement.”

But as soon as he left, his friend’s alcoholism finally caught up with him and felled him. Suddenly widowed and with no means of providing for her son, Maria plummeted into the depths of despair — in her time and place, a woman with no husband and no property was, as Mary Shelley put it in the same epoch, “the world’s victim.” Fyodor was moved to see “with what selflessness, with what strength” Maria bore her misfortune. Dangerously in debt himself, he borrowed some money and immediately sent it to her, then spent months petitioning to get her son admitted into a good school.

By the following spring, ready to reenter the world and find a means of subsistence, he joined the Siberian Army Corps as a soldier. Leaving the family, he found parting with them harder “than parting with life.”

Throughout his courtship, Fyodor had been troubled by one glaring gap in his reasoning. A decent man, a practical man, he was aware that he too had no way of providing for Maria and her son on his meager soldier’s salary — if she married him instead of the young schoolteacher, she would still suffer the privations of poverty. But then, in the final weeks of 1856, everything changed: He was promoted to officer and, immediately, he made a formal proposal. Just before the Christmas holidays, after keeping the entire tortuous story of the romance from his family, he finally wrote to his sister: