CNET’s Monisha Ravisetti contributed to this report.
Made up of 18 hexagonal segments and measuring 21 feet, the mirror is the biggest ever launched into space, NASA said, with the telescope itself the world’s largest and most complex space science telescope. After the team painstakingly flexes and aligns the segments, and calibrates other instruments, the telescope can start sending back its first images, which it’s expected to do this summer.

The team behind the recently launched James Webb Space Telescope successfully finished unfolding the instrument’s distinctive golden mirror on Saturday, meaning the telescope is now fully deployed and is one step closer to sending back data about the universe’s first galaxies.

Unlock the biggest mysteries of our planet and beyond with the CNET Science newsletter. Delivered Mondays.
Read more: Why Webb telescope is a monumental event for astronomy
The James Webb Space Telescope, in an artist’s rendering. See if you can spot the biggest mirror ever launched into space.
The telescope was built to look back more than 13.5 billion years, grabbing infrared light from stars and other celestial objects, with better resolution than ever before. It’s “an unprecedented mission that is on the precipice of seeing the light from the first galaxies and discovering the mysteries of our universe,” NASA Administrator Bill Nelson said in a release.
Over the next six months, Webb is set to travel 1 million miles from Earth and begin sending back images of the universe that promise to serve up a new, unfiltered story of the cosmos. Not only will Webb teach us about hidden regions of space, it also has the power to prove whether we’ve correctly documented the events that happened right after the Big Bang.
“The successful completion of all of the Webb Space Telescope’s deployments is historic,” Webb’s program director at NASA Headquarters, Gregory L. Robinson, said in a release. “This is the first time a NASA-led mission has ever attempted to complete a complex sequence to unfold an observatory in space – a remarkable feat for our team, NASA, and the world.”
NASA and its partners, the European Space Agency and the Canadian Space Agency, began remotely unfolding the two wings of Webb’s primary mirror on Friday and completed the task at about 10:15 a.m. PT Saturday, when the second wing latched into place. 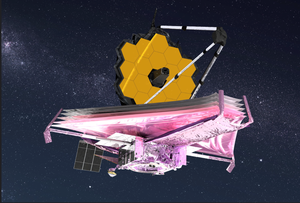