This story is part of War in Ukraine, CNET’s coverage of events there and of the wider effects on the world.
“Unlike Chernobyl, they have a containment around the reactor to stop any radioactive release” said Tony Irwin, a nuclear engineering expert and honorary professor at Australian National University. Irwin notes they have multiple cooling systems in order to prevent a meltdown.
Earlier in the day, the director general of the IAEA, Rafael Mariano Grossi, called for “an immediate halt to the use of force” in the nearby town of Energodar, calling on Russia’s military to “refrain from violence near the nuclear power plant.”

The Zaporizhzhia nuclear power plant contains six light water nuclear reactors. These are different in design from the reactors at the Chernobyl nuclear power plant, the site of a reactor meltdown in April 1986, which used so-called RBMK reactors. The light water reactors are considered to be more stable than those used at Chernobyl and are used in many parts of the world, including the US. Zaporizhzhia is approximately 500 miles to the south of Chernobyl.

Updated March 3, 8:20 p.m.: Added comments from Tony Irwin
Updated March 4, 12:11 a.m.: Added information about invading Russian forces seizing the plant
A training facility at Ukraine’s Zaporizhzhia nuclear power plant, the largest in Europe, caught fire following an attack by Russian forces on Thursday. The power plant was later seized, according to Ukraine’s state nuclear regulator. There are no signs of elevated radiation levels around the plant, according to the International Atomic Energy Agency.
US President Joe Biden spoke with Ukrainian President Volodymyr Zelenskyy on Thursday and urged Russia to allow firefighters and emergency responders into the plant.
Ukraine’s state nuclear regulator announced on March 4 that Russian forces had seized the site and provided information about the reactors, with only one unit in operation. It also raised the issue of spent nuclear fuel, which is stored at the facility, noting shelling could damage the fuel and lead to “radioactive releases.”
Ukraine’s nuclear plant operator, Energoatom, shut down two of the plant’s six reactors on Feb. 25. The website for the plant, which shows radiation levels, was unable to be accessed at the time of writing.
Energoatom said the fire broke out in a nearby training building and didn’t affect the reactor buildings. The IAEA also noted, in a tweet, the fire has “has not affected “essential” equipment, plant personnel taking mitigatory actions.”
Al Jazeera reported in its live blog comments from Oleksandr Starukh, head of the military administration of the Zaporizhzhia region. “The director of the plant said that the nuclear safety is now guaranteed,” he said on Facebook.The six reactors of the  Zaporizhzhia nuclear power plant in 2019. 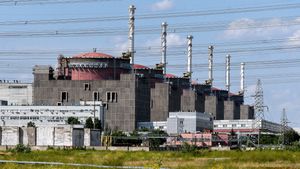