More information here.
Aggregating over the past four years of data (2017-2020), 42% of graduates with a second major in philosophy were women, compared to 36% of graduates whose only or primary major was philosophy.
At his blog, The Splintered Mind, Professor Schwitzgebel writes: 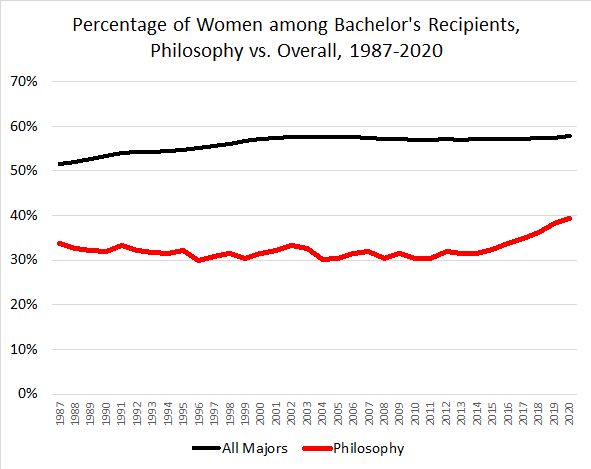 Women were very steadily 30-34% of Bachelor’s recipients in philosophy from 1987 to 2016. In 2017, they reached 35% for the first time. In 2018, 36%. In 2019, 38%. In 2020, 39%. Although this might seem like a small increase, given the numbers involved and the general slowness of cultural change, this constitutes a substantial and significant movement toward parity. This increase appears to be specific to philosophy. For example, it is not correlated with the percentage of women graduates overall which rose from 51% in 1987 to 57% in 1999 and has remained steady at 57-58% ever since.

In 2020, 39% of undegraduates leaving colleges with degrees in philosophy were women, up from 35% in 2017, reports Eric Schwitzgebel (UC Riverside).
He notes that the trend is especially pronounced among those with philosophy as a second major:
from “The Philosophy Major Is Back, Now with More Women” by Eric Schwitzgebel