“There are both intellectual and practical questions here. On the intellectual side, a major question is how the medium of email affects the communication and discussion of philosophical ideas… On the practical side… how do we approach the job of preserving a philosopher’s emails after her death, assuming there is sufficient scholarly interest in her correspondence?”
And then there’s the fact that few of us bother to file our sent messages, which means that our sent mail folders can contain tens of thousands of unsorted emails. This raises privacy issues: surviving relatives and universities may be unwilling to turn over whole email accounts to aspiring historians or archivists when they are likely to contain a huge amount of personal information not only about the individual themselves but about their family, students, colleagues, and so on. Not to mention the fact that some universities now routinely delete old emails without warning in order to reduce the risk of failure to comply with data protection laws.
A screenshot of the database of David Lewis’s correspondence

The Philosopher’s Archive in the Digital Age:
David Lewis and His Correspondence
by Helen Beebee and Anthony Fisher

The project has shown that digitizing archival material and creating databases using a big data analytics approach is one important tool for those working in the history of philosophy. We could not have produced Philosophical Letters of David K. Lewis without it. Of course, this new body of material does not end with the publication of his letters. It is only the beginning. His published correspondence amounts to over 1,400 pages across two volumes, which is only half of his philosophical letters. The universe of Lewis’s thought contains so much more, not to mention the stacks of letters to Lewis by hundreds of other philosophers, many of whom have been influential in countless ways too. Thankfully, all of these letters are preserved in the Firestone Library, Princeton University, in the David Lewis Papers (C1520), where they are open for research.
One of the first, striking features we discovered was that Lewis wrote letters in a lot of areas of philosophy all at the same time. Pick a day and the database often showed 4 or 5 letters on such disparate topics as semantics, philosophical logic, mind, epistemology, and causation. The mental power to write on wide-ranging topics like this is extremely impressive. It is further proof—if we needed it—of the intellectual force behind Lewis’s far-reaching mind. But it also shows us that he had many philosophical questions in the front of his mind at once most of the time.
Let’s get back to the letter-vs-email issue. There are both intellectual and practical questions here. On the intellectual side, a major question is how the medium of email affects the communication and discussion of philosophical ideas. Sending an email—as opposed to sending a letter or a fax—takes literally no effort beyond the writing, and an email conversation involving considerable to-and-fro can take place over the course of a few hours rather than several weeks or months. In his letters, Lewis’s writing was meticulously careful. Would he have been so careful if mistakes or misinterpretations of his interlocutors could have been questioned or corrected within minutes? Would he have fleshed his preliminary thoughts or his objections out in quite so much detail? Which medium—the slow-moving letter or the instantaneous email—is a better medium for doing philosophy?

Then we discerned both global features—intellectual arcs, if you will—and specific features of his correspondence. At the specific level, we could identify intense periods during which Lewis worked on a major project, such as his book on Counterfactuals (1973). This sort of thing was expected, but what was unexpected was that sometimes the seed of a later thought occurred well before the publication of the corresponding article in print or the initial statement of a theory. For instance, Lewis wrote a sympathetic defense of the identity theory of mind to his undergraduate teacher Jerome Shaffer in March 1963 before he met Jack Smart at Harvard later that year, which shows us that Lewis was already thinking about the identity theory of mind. Another example, also involving Smart: Lewis is known for espousing the Mill-Ramsey-Lewis theory of laws. You might naturally think that Lewis arrived at the theory from reading Ramsey, since he courteously presents the theory in that way in his writings, but his correspondence reveals that he formulated it independently in a 1967 letter to Smart, before reading Ramsey in 1970.

The literary way of doing philosophy by ordinary mail has all but died; it’s yet another change due to the digital age. But Lewis the conservative was vehemently opposed to the use of email. His argument was that email is a sophisticated technology that only experts use and that it was an unfair imposition to make everyday people learn how to use it. Although Lewis was on the wrong side of history when it came to email, it meant that when his peers began to use email he did not. He stuck to the old, trusty typewriter at home and the outdated IBM Displaywriter in the office. Thus his archive is a paper-only archive. Indeed, his archive is likely to be one of the last paper-only archives in analytic philosophy. At the University of Manchester, we were part of the AHRC-funded project on David Lewis called The Age of Metaphysical Revolution [grant no: AH/N004000/1] and in December 2020 we published two volumes of Lewis’s correspondence: Philosophical Letters of David K. Lewis: Vol. 1: Causation, Modality, Ontology, and Vol. 2: Mind, Language, Epistemology (OUP, 2020).
When we looked across his letters to detect arcs of thought we realized that for many of his views he either arrived at them or endorsed them well before we typically think he did. He is sometimes characterized as a philosopher who wrote a lot about philosophy of language, philosophical logic, philosophy of science, and philosophy of mind in the first part of his career and moved to metaphysics later. But his letters tell a different story. He was thinking about the metaphysics of time and time travel at the same time that he developed counterpart theory. Indeed, his thinking about the notion of counterparts and concrete possible worlds stems from drawing analogies between modality and time. Viewed in this light, by 1970 Lewis had a package deal that consisted of the doctrines that we associate him with: the counterfactual theory of causation (first espoused in his very first undergraduate philosophy essay in 1958), a priori reductionism, materialism, four-dimensionalism, identity theory of mind, conventions of language, counterpart theory, best-systems account of laws, set-theoretic nominalism, a similarity account of counterfactuals, and modal realism. The upshot is that Lewis was, in fact, doing metaphysics early on and, more importantly, thinking in systematic terms. The overt concentration on metaphysics that came later was more of a filling out of a philosophical system he was already committed to. The list of insights could go on.
We took a big data analytics approach. With the online database technology Obvibase we rendered unstructured masses of data into intelligible material—not only for selecting letters suitable for publication and for the associated editorial work (cross-referencing, citations, etc.), but also for broader research purposes. The ability to search the letters, e.g. for recipients, subject matter and time period, allowed for efficient and effective manipulation of this data-set, which offered new insights into the development of his thought. We were able to notice trends and patterns in his work that informed our interpretation of his philosophy.

These questions are among those raised by Helen Beebee (University of Manchester) and Anthony Fisher (University of Washington) in the following guest post*, in which they describe some of their work organizing and publishing the correspondence of David Lewis, widely regarded as one of the most significant philosophers of the 20th Century, what they learned from it, the role such correspondence plays in understanding philosophers and the history of philosophy, and the challenges posed by the move to electronic forms of communication.
On the practical side, the switch from letters to emails raises significant questions about the future viability of projects such as ours. In the digital age, how do we approach the job of preserving a philosopher’s emails after her death, assuming there is sufficient scholarly interest in her correspondence? For starters there is the brute problem of access: emails on a password-protected computer or commercial webmail server may be simply impossible to retrieve unless the author has left instructions.
Wading through page after page of his letters was like drinking from a philosophical fire hose. To help with comprehending the true significance of this material we digitized his letters and organized them into a database by date, recipient, subject matter, and area of philosophy (metaphysics, mind, language, etc). Out of approximately 3,500 letters, 1401 letters contained philosophical content. 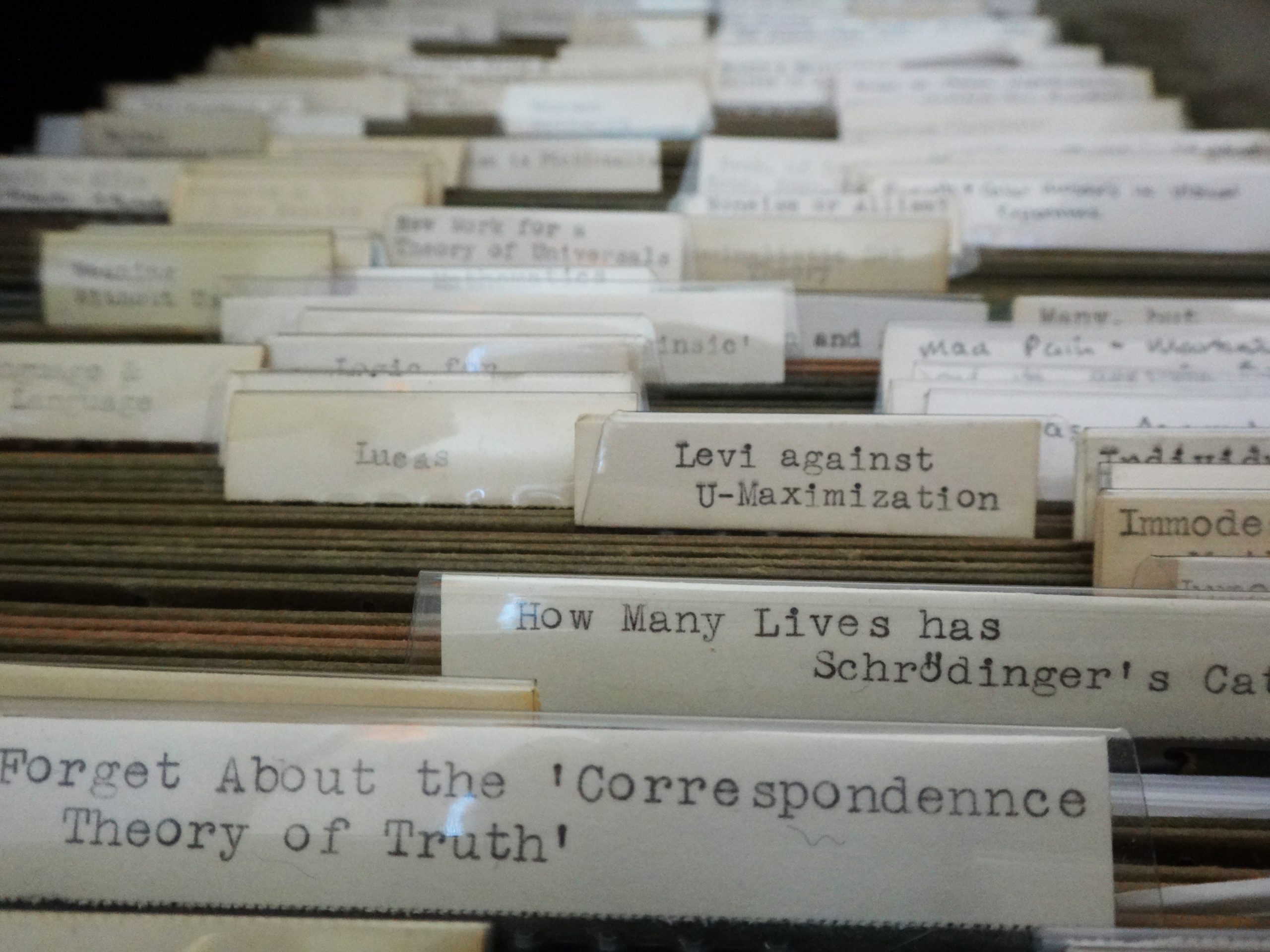 For centuries philosophers have discussed their ideas, arguments, and theories via correspondence. Some of the most important pieces in the history of philosophy are documents like Epicurus’s Letter to Menoeceus or Descartes’s Replies to Objections to the Meditations. David Lewis (1941-2001) wrote thousands and thousands of letters to hundreds and hundreds of philosophers, discussing and expounding his own theories and criticizing others. His contribution to philosophy, like other great philosophers, is partly constituted by his very act of producing and maintaining a correspondence, which in his case was ordered and catalogued by him with both sides of the correspondence intact.
Even assuming all of those hurdles are surmountable, future archivists will have a tricky problem with handling electronic email archives given the sheer volume of material that they normally contain. Experts in the archive industry are beginning to tackle this problem; for example, Harvard University, Stanford University, and the University of Manchester have a joint project called ePADD+, which is investigating ways to improve technologies for processing and preserving email collections. While the problem is ultimately theirs to deal with, philosophers as good scholars should be clued in to the development of this aspect of the digital humanities, for it will have an impact on how scholarly research is done.