Another century hence, another prophet of the ages saw, and named, the underlying truth beneath these truths: that if this you, this me, is in fact an ever-changing chance-constellation of cells, ideas, beliefs, impressions, mental states, emotional weather systems, constantly making and remaking itself into what we experience as selfhood, then God is the other name of chance and change, of that flickering constellation. God is the name we — “atoms with consciousness,” who know that one day we shall become “one with the dull, the indiscriminate dust” but wish it to be otherwise with every atomic fiber of our being — is the name we give to our touching longing for permanence in a universe of change.
“He is the only God. And so am I and so are you,” William Blake said of Jesus in one of his prophetic koan-like pronouncements.
God
Is Change.
A victim of God may,
Through learning adaption,
Become a partner of God,
A victim of God may,
Through forethought and planning,
Become a shaper of God.
Or a victim of God may,
Through shortsightedness and fear,
Remain God’s victim,
God’s plaything,
God’s prey.

A century after him, Hermann Hesse leaned on his reverence for nature as he considered the value of hardship, urging the dispirited to listen to our inner voice: “If you are now wondering where to look for consolation, where to seek a new and better God… he does not come to us from books, he lives within us… This God is in you too. He is most particularly in you, the dejected and despairing.”

All that you Change
Changes you.
The only lasting truth
Is Change.
In the opening pages of her 1993 masterwork Parable of the Sower (public library) — the first part of her oracular Earthseed allegory — Octavia Butler (June 22, 1947–February 24, 2006) writes:
Complement with Borges on what makes us who we are and John Burroughs’s superb century-old manifesto for the spirituality of nature, then revisit Butler on how we become ourselves and how (not) to choose our leaders.

All that you touch
You Change.

This, of course, is the only appropriate conception of “God” — which is also another word for “nature” — if we are lucid about what actually happens when we die: that is, when we return our borrowed stardust to nature. Butler intimates as much, insisting again and again that “God” is the vessel we create to hold the blooming buzzing chaos of the ever-changing self. “To shape God, shape Self,” she would write five years later, in the sequel to Parable of the Sower. 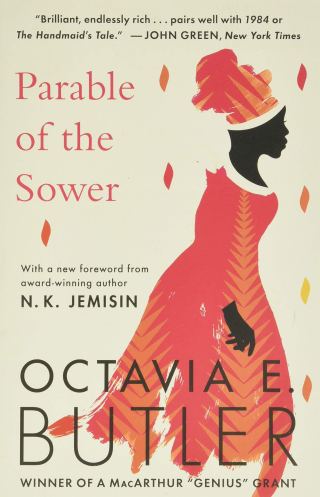 Defining intelligence as “ongoing, individual adaptability” and reminding us that “civilization is to groups what intelligence is to individuals,” she considers our orientation to “God” — to change — as a vital adaptation that shapes the outcome of any individual human life. In a mighty antidote to our present culture of abdicating personal responsibility for our own lives (which, as Joan Didion knew, is another term for character) in favor of competitive victimhood, Butler writes: