“There is a dangerous movement by some social media companies to silence conservative ideas and values,” Abbott, a Republican, said in a video posted to Facebook. “This is wrong and we will not allow it in Texas.”
Spice up your small talk with the latest tech news, products and reviews. Delivered on weekdays.

Texas Gov. Greg Abbott on Thursday signed a bill that prohibits large social media companies from banning users or blocking content based on their political viewpoints.

NetChoice, an internet industry group that sued to challenge the Florida bill, criticized the Texas law as unconstitutional for containing the same conflict with the First Amendment as the Florida bill.
Facebook and Twitter declined to comment, while Google didn’t respond to a request for comment.
The law targets companies with at least 50 million monthly users in the US, including Facebook, Twitter and Google’s YouTube. The legislation, billed by the governor’s office as protecting Texans “from wrongful censorship on social media platforms,” would allow residents of the state to sue companies for reinstatement of accounts.
Texas Gov. Greg Abbott said the law will protect Texans “from wrongful censorship on social media platforms.”
In June, a federal judge blocked a Florida law from taking effect that would that would have allowed the state to punish social media companies for banning politicians or political candidates from their platforms. The judge in that case found the law’s prohibition on “deplatforming” may violate companies’ free speech rights and that the legislation on the whole is “viewpoint-based.”
The Florida bill, signed by Republican Gov. Ron DeSantis, was proposed after the high-profile banning earlier this year of President Donald Trump from Twitter and Facebook for violating their policies after the deadly Jan. 6 riot on Capitol Hill.
The new law comes amid rising pressure from several Republican lawmakers who alleged that Twitter, Facebook and other social networks harbor anti-conservative bias. The social networks have denied those charges. 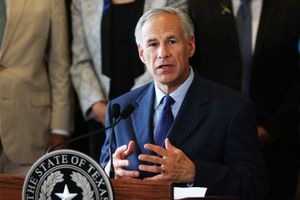