Saint-Exupéry writes:
There is an ancient myth about the image asleep in the block of marble until it is carefully disengaged by the sculptor. The sculptor must himself feel that he is not so much inventing or shaping the curve of breast or shoulder as delivering the image from its prison.
I am sitting on an airplane, uneasy and grateful amid the sea of masks.
In a passage from Wind, Sand, and Stars (public library) — that slender, poetic collection of his life-drawn meditations on life — he reverences the elegant and daring miracle of flight, a miracle we have come to take for granted in a mere two generations as the technology behind it has exponentially improved to make it even more miraculous. (I am writing this on a book-sized machine that can access through the air nearly all the knowledge humanity has produced, and I am doing that while suspended in the middle of the sky — what would Kepler have made of this, or his mother, who paid for the kernel of this miracle with her life?)
[…]
I am thinking about my grandmother, who was already a grandmother by the time she flew for the first time, having seen an airplane only once before, in the forest by the remote Bulgarian mountain village of her wartime childhood — a fighter plane shot down to fall from sky into the life and imagination of a little girl wide-eyed with wonder and terror.

It was a countercultural notion then, and it is even more so today, this idea that the mechanical can become not the enemy of but a portal to the poetic, the miraculous — a lovely reminder that in how we orient ourselves to anything lies the whole of its valence.

Complement with the uncommonly poetic scientist and philosopher Loren Eiseley on reclaiming our sense of the miraculous in a mechanical age, then revisit Saint-Exupéry on losing a friend and how a simple smile saved his life during the war. 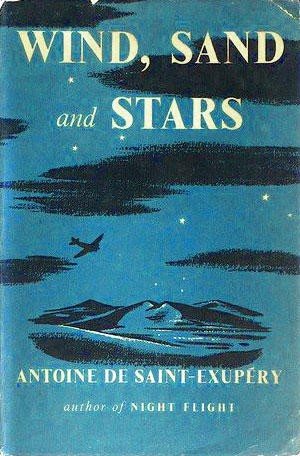 In anything at all, perfection is finally attained not when there is no longer anything to add, but when there is no longer anything to take away, when a body has been stripped down to its nakedness.
I am sitting on an airplane — this silver triumph of physics and imagination centuries in the dreaming — watching the cotton-candy cloudscape below with wonder bordering on ecstasy that will never, for me, grow old.

And thus, also, the realities of nature resume their pride of place… The machine does not isolate man from the great problems of nature but plunges him more deeply into them.

In this spirit do engineers, physicists concerned with thermodynamics, and the swarm of preoccupied draughtsmen tackle their work. In appearance, but only in appearance, they seem to be polishing surfaces and refining away angles, easing this joint or stabilizing that wing, rendering these parts invisible, so that in the end there is no longer a wing hooked to a framework but a form flawless in its perfection, completely disengaged from its matrix, a sort of spontaneous whole, its parts mysteriously fused together and resembling in their unity a poem.

I am thinking, too, of Little Prince author Antoine de Saint-Exupéry (June 29, 1900–July 31, 1944), whose experience as a pilot during that same war sculpted his understanding of mortality and meaning, inspiring his timeless masterwork of philosophy disguised as a children’s book — my favorite of all time.
Startling as it is that all visible evidence of invention should have been refined out of this instrument and that there should be delivered to us an object as natural as a pebble polished by the waves, it is equally wonderful that he who uses this instrument should be able to forget that it is a machine… We forget that motors are whirring: the motor, finally, has come to fulfill its function, which is to whirr as a heart beats — and we give no thought to the beating of our heart. Thus, precisely because it is perfect the machine dissembles its own existence instead of forcing itself upon our notice.

Saint-Exupéry extends the invitation to reorient to this particular skyborne machine — and, by a proximate leap of imagination, to technology in general — as something that, rather than alienating us from the rest of nature, could bring us into more intimate and conscientious contact with the world of clouds and creatures: