An organized mind must conceive of time as flowing towards that direction in which is more reserve energy in that particular part of the universe. This may be either direction in time, either that which is, in our particular minds, forwards or backwards; but, if we conceive of past and future with this mental definition, the second law of thermodynamics follows as a necessary mental law.
In the jail cell next to his was a short, feisty young suffragist and socialist named Martha, who had dropped out of college to crusade for equal rights and could recite Milton.
And then he offers the even more bewildering caveat of a corollary:

Upon graduating at age sixteen, he silenced the press fanfare by promptly declaring that he wished to live the rest of his life in seclusion — his idea of the perfect life. That lasted less than a year. (Let us suffer no Cartesian delusion — he might have had the mind of a genius, but it was coursing through the body of a teenager.)

By three, he could read and write. By five, he was studying anatomy with his parents. By eight, he had learned several languages beyond English and invented one, which he christened Vendergood. His mastery of Greek and Latin was so thorough, and his mind so fertile with ideas, that soon he was writing original poetry in the ancient languages.

Sidis writes:
A mind pinned to any point of the sine would look up to the crest of the wave and call that memory, and look down to the trough and call that time.
This is where New Age demagogues, with their signature combination of superficial understanding of the actual science and rash readiness to hijack selective bits as affirmation of their ideas, might find a foothold. But no — Sidis is very clear in preempting the basic misappropriation by describing the experience of time as a sine wave of available energy, undulating vertically between positive and negative, while moving horizontally along the arrow of time from past to future — but moving by constant up-down fluctuation. Imagine a mythic sea serpent swimming in some direction amid a boundless ocean, its glistening body curving above the surface (let’s call this the area of positive energy), then curving below (negative energy).
A century earlier, while Eddington was launching his gauntlet, the forgotten visionary William James Sidis (April 1, 1898–July 17, 1944) contoured this possibility in his 1925 book The Animate and the Inanimate (public library | public domain) — an inquiry into the origin and nature of life, which anticipated Fermi’s paradox, inspired Buckminster Fuller, and explored black holes fourteen years before the first major work on this cosmic reality that Einstein himself had theorized but ultimately dismissed as a delightful plaything of mathematics.

Every era has its Democritus and is blind to their vision, leaving posterity to vindicate it generations or centuries later as our landscape of knowledge shifts the horizon of truth.
Naturally, he fell in love.
And then, in the 2020s, things suddenly looked otherwise. As the daring new science of counterfactuals is furnishing a general theory of possibility for the physics of our epoch, new work in quantum information is rewriting the second law of thermodynamics, indicating that deep down in the quantum undertow, at the level of fundamental particles, reversing the classical laws of motion — and along with them the arrow of time — might be possible.
Sidis took this idea out of philosophy and applied it to physics. This is often where scientists slip and slide into metaphysics. But while there is a metaphysical feeling to Sidis’s theories, he holds firmly to the foundation of physics, aiming not to dismantle it but to repair is most rickety plank — the second law of thermodynamics, which had left generations of scientists uneasy ever since Clausius coined entropy.

Sidis had been nursed on his godfather’s notion of “reserve energy.” The year his godson left Harvard, William James had delivered a rousing address to the American Philosophical Association, in which he formulated this central tenet of his philosophy:
Ever since humans discerned the presently known laws of physics, a blink ago in the evolutionary history of the universe, it seemed like time was inseparable from entropy: that inescapable, irreversible dissolution of order into disorder along the arrow of time, dismantling organized matter and self-aware minds, ensuring that everything we love and are ends up “one with the dull, the indiscriminate dust.” Without entropy — which anchors the second law of thermodynamics — we couldn’t tell a previous moment from the next, and so it seemed like without entropy there would be no time. To imagine otherwise — to question the dictate of irreversibility — would be nothing less than to negate the laws of physics.
He was also, and predictably, a highly unusual child that became an even more unusual young man — eccentric, as his era called him; neurodivergent, as ours might.
Drawing on Emmy Noether’s revolutionary work on symmetry, which had shaken centuries of physics a few years earlier, Sidis considers the undeniable difference between the transformation of energy from positive to negative — from life to non-life — and its transformation in the opposite direction, deemed impossible by the laws of physics:

A useful way to think about it might be that the sensation of having back is not something that happens behind the mind but within it — front and back are conveniences of consciousness, adapted to our particular physiology, in order to move efficiently through the particular world we evolved in.
“Time is the substance I am made of,” Borges wrote in his exquisite refutation of time an epoch before we time-substantiated creatures came to discover the staggering strata of scientific fact beneath his poetic truth — our entire experience of selfhood is rooted in the neuropsychology of time and the bridge to other selves that we call empathy is a kind of internal clock.
Only forty-six years had elapsed along the arrow of time when William James Sidis undulated from the animate to the inanimate, his uncommon mind thrust into a coma by a brain hemorrhage, then extinguished. An unfeeling obituary appeared immediately in New York Times, stating that he was found in his room “in a Brookline boarding house, apparently destitute.” Unmentioned was the book in which he peered far past the era’s horizon of truth, presaging a century of physics and unmooring our millennia-deep certitudes about life and death.
It might be supposed that this difference between one kind of transformation and its inverse indicates an irreversible law; and… if we give up the second law of thermodynamics, we must replace it by the statement that all physical laws are reversible. Hence it would seem as though we had arrived at an inconsistency. But, if we examine into the question, we will see that one form of transformation is not the actual reverse of the other, but that each process is symmetrical in time, and is really the reverse of itself.
By fourteen, he was presenting his own theories and was heralded not as “a learner” but as “a diviner.”

Word of the boy wonder spread nationwide. “The story of this boy’s life reads like a romance,” The Philadelphia Inquirer rhapsodized four days before his twelfth birthday, “but every step of his remarkable career is vouched for by those who have watched his marvelous development.” Journalists went to see this “boy in knickerbockers” with rosy cheeks and eyes as grey as Whitman’s stand “before the savants of Harvard to lecture on mathematics.” There was something both delightful and discomposing about the majestic mind discoursing on the fourth dimension with “the clear, musical voice” of a child.
[…]
Hence… the second law of thermodynamics is to be interpreted as a mental law, as the law determining the direction in which a given mind will conceive of time as flowing. [And yet] time itself is not a mental phenomenon, but only the appearance of flow. There is actually no more flow in time than in space, and either direction in time may be called past and the other future, without any difference in the properties of the universe. But the actual existence of intervals of time we must assume as being a physical reality, and absolutely necessary for the explanation of physical phenomena.

By seventeen, he was teaching mathematics, Euclidean geometry, and non-Euclidean geometry at what is now Rice University in Texas. Within a year, he found himself so catatonically unstimulated that he left for New York City, where he took a job as an adding machine clerk making a week. He entered the Harvard Law School, then dropped out and set about translating Chekhov’s pamphlet on the hazards of tobacco and refuting Freud while working out his own social and scientific theories.

Sidis proposes a model of the universe that resembles “a sort of three-dimensional checkerboard,” made of black and white “bricks” — distinct regions of positive and negative energy, in which the positive, light-emitting portions constitute the white bricks and the negative, light-absorbing portions the black. In such a universe, where we naturally fall into the positive energy regions by virtue of being alive, we would only see the white brick we are in. The surrounding black bricks would not only remain invisible — for they are absorbing the light that is the sight-sense of consciousness — but would also absorb the light from any white bricks beyond them, thus rendering them also invisible from the vantage point of our brick. And so, while energy is constantly flowing in all directions — the directional flow we call time — we can only see it vanish into our neighboring black brick.

If… your pet theory of the universe… is found to be contradicted by observation — well, these experimentalists do bungle things sometimes. But if your theory is found to be against the second law of thermodynamics I can give you no hope; there is nothing for it but to collapse in deepest humiliation.

Born in New York to a psychiatrist father with a specialty in abnormal psychology and a physician mother who had earned a degree in medicine at a time when very few women did, Sidis showed an uncommon gift for mathematics and languages from a very early age. His parents — both of whom had emigrated from Ukraine to America as Jewish refugees from the Russian pogroms — not only actively nurtured the natural gift but seemed to have expected it of him from the outset: They named their son for his godfather, their friend William James.
Sidis considers the bewildering intimation of such a universe: 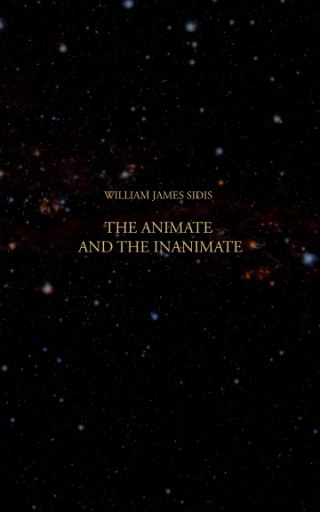 Complement The Animate and the Inanimate — an extraordinary read a century later, though not for the faint of mind or for the queasy at contradiction — with Sidis’s godfather on the permeable boundary between different forms of consciousness and his contemporary Erwin Schrödinger, who would win the Nobel Prize for pioneering the quantum science that would substantiate Sidis’s ideas, on mind and matter, then revisit physicist Alan Lightman’s classic reimagining of time.
[…]
[…]
He returned to Harvard, enrolling in its Graduate School of Arts and Sciences. He was bullied and he was brilliant and he moved away.

At the heart of his theory of the origin of life is the idea that “there was no origin, but only a constant development and change in form.” The direction of change is what we call time.
Harvard finally admitted him at eleven — the youngest person to study at the venerable university. His father had been trying to enroll him for two years.