This story is part of Focal Point iPhone 2022, CNET’s collection of news, tips and advice around Apple’s most popular product.

Apple introduced the feature when talking about the new Apple Watch Series 8, its new smartwatch. Crash detection uses two sensors to detect impacts and will automatically connect the person wearing it to emergency services, passing along their location info. It will also notify emergency contacts.

Machine learning takes information from the sensors, as well as others like the watch’s GPS and microphone to determine there’s been a crash. It was trained on more than 1 billion hours of driving and crash data. The feature only runs when you’re driving and all the data is processed on the device, Apple promised.
Crash detection is one of the many new things Apple announced on Wednesday. The Apple Watch Ultra and AirPods Pro 2 were also unveiled, alongside a release date for iOS 16.
The Apple Watch Series 8 and iPhone 14 will be able to detect if you’ve been in a car crash, Apple said at its “Far Out” event Wednesday. 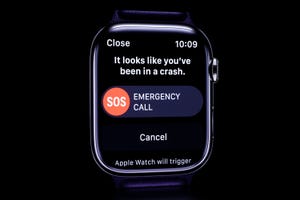