I’d nominate Will Kymlicka‘s Contemporary Political Philosophy, the original edition of which was published in 1991 (an updated version appeared a decade later), which drew out a set of philosophical disputes and concerns that had emerged in political philosophy over the previous 20 years, and which—in part because (it seems) so many future political philosophers read it as students—would continue to be central to political philosophy, even as the discipline changed, for another 20. I’d be curious to hear if others in political philosophy agree.
What are other examples of area-defining or agenda-setting or otherwise influential textbooks in philosophy?
Philosophy textbooks—anthologies or introductory-level commentaries—can take on roles beyond the pedagogical purposes for which they’re put together. Through editorial and authorial choices of inclusion and exclusion such works can define or clarify fields of study, canonize specific works, identify a subdiscipline’s central problems, and, depending on uptake, set the agenda for future work in the area. 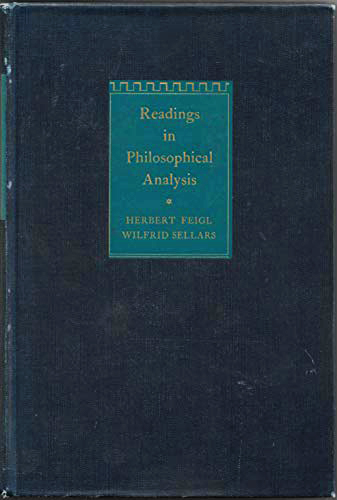 In a post at his blog, Digressions & Impressions, Eric Schliesser discusses Readings in Philosophical Analysis, a 1949 anthology edited by Herbert Feigl and Wilfrid Sellars that, he says, “sets the agenda for the other textbooks [of the era], and simultaneously helps consolidate, roughly, what counts as analytic philosophy (or in modern philosophical analysis) and not.” The book was over 600 pages long, with 42 pieces in it (journal articles and book excerpts). (See this brief review of it in The Philosophical Review.) Schliesser also mentions (at the suggestion of Alan Richardson), Semantics and the Philosophy of Language, A Collection of Readings, a 1953 volume edited by Leonard Linsky that while itself is “not the definitive canon” still “clearly anticipates much of the early canon of the philosophy (of language centered) proseminar.”