The consistency of the phenomena around us, order, regularity, cyclical repetitions and renewals… brings me repose and gives me support. In my pictures I try to bear witness that we are living in a beautiful, ordered world, and not in a chaos without pattern, as it sometimes seems.
Many a print reached definite form in my mind while I was listening to the lucid, logical language he speaks, while I was drinking the clear wine he pours.
But for all his loneliness, Escher also saw himself as tasked with “astonishment” — “sometimes ‘beauty’ is a nasty business,” he wrote — and with rendering “dreams, ideas or problems in such a way that other people can observe and consider them.” And this was enough — the sheer joy his work gave him assured him that he was on “the right track.”

Months after Rachel Carson’s untimely death, Escher received an award with a reflection on his core creative ethos that is as true of hers:

Work so unusual did not, could not, be arrived at via the usual paths. For all the astonishing mathematical precision of his prints, Escher had struggled ferociously with mathematics as a young student at the Haarlem School of Civil Engineering and Decorative Arts. It wasn’t until he heard Bach’s Goldberg Variations that his mind snapped onto its own gift for rendering meaning through form. “Father Bach,” he called him. Wonder-smitten by Bach’s music — by its mathematical figures and motives repeating back to front and up and down, by the majesty of “a compelling rhythm, a cadence, in search of a certain endlessness” — Escher felt in it a strong kinship, a special “affinity between the canon in the polyphonic music and the regular division of a plane into figures and identical forms.”

He began taking voyage after voyage aboard cargo ships. Mesmerized by the billowing trails the ship left on the water, he watched the flying fish from the deck. He filled his notebook with a private glossary of nautical terms. On land, he read everything about the ocean he could get his hands on as the it went on tugging at his heart. He felt that only seasoned sailors understood this elemental yearning. “You never (or very rarely) come across such people on land,” he told his son.

Carson’s poetic yet scientifically scrumptious writing rendered the wonder of the sea comprehensible not by diminishing its enchantment but by magnifying it with understanding, giving Escher a new way of thinking about the three-dimensional nature of space that had always animated his work and making him consider for the first time the fourth dimension of time. Like Carson, who looked at the ocean and saw in it a lens on eternity and the meaning of life, he now saw the ocean as an antidote to the transience that marks our lives — an ever-flowing, ever-lapping salve for our terrified incomprehension of the finitude of time, which is always at bottom a terror of our own finitude:

In the introduction to the 1957 book about his core creative obsession, Regular Divisions of the Plane, he painted himself as a vessel for some larger creative force, available to all but accessed only by the very few:

It continues to be a profoundly sad and disillusioning fact that I am beginning to speak a language these days only very few understand. It only increases my loneliness more and more.

A person who is lucidly aware of the miracles that surround him, who has learned to bear up under the loneliness, has made quite a bit of progress on the road to wisdom.

He grew obsessed with rendering the blue fluidity of the “liquid element” in a static black-and-white image that sacrificed none of the feeling-tone and dynamism of the living reality:
Like Carson, who was too lyrical for science and too scientific for literature, Escher inhabited two worlds as an outsider to both; he felt that scientists nodded politely at his mathematically inspired art “in a friendly and interested manner,” but considered him merely a “tinkerer,” while artists were “primarily irritated” by his unclassifiable graphic daring. From this betwixt-and-between place, he lamented to son: 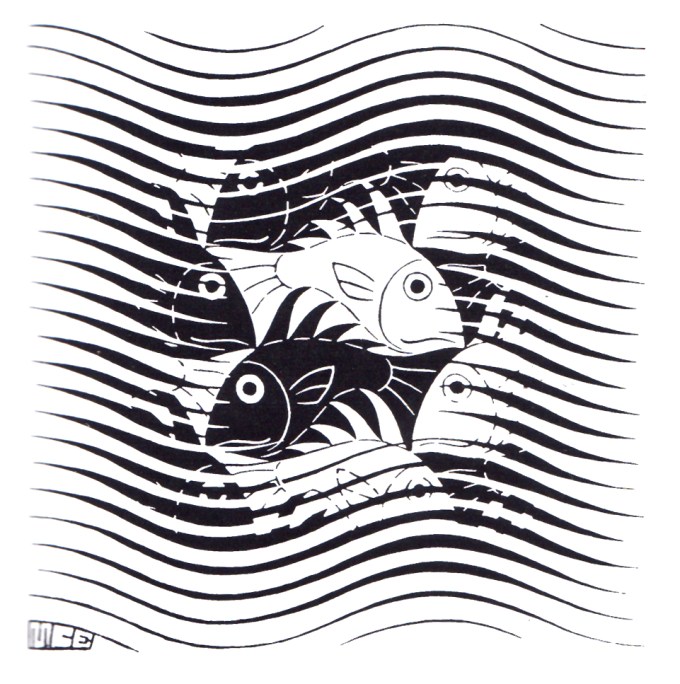 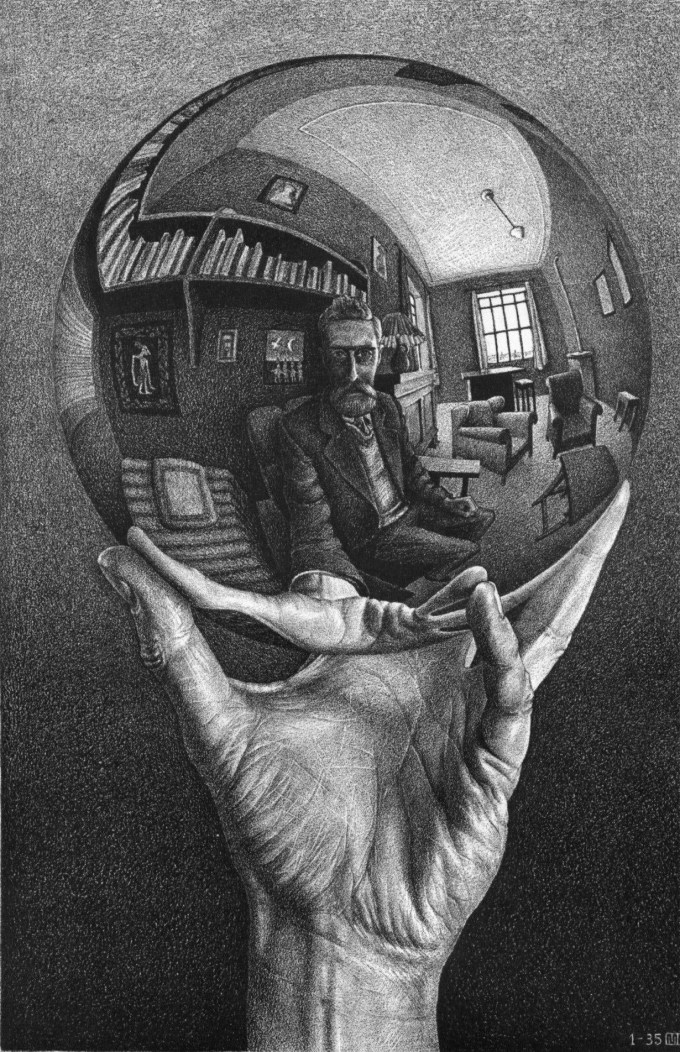 Escher spent his life trying to bear up under the loneliness of gift — the product of a rare mind best described, to use a notion alien to his epoch, as gloriously neurodivergent. His stunningly detailed lithographs and his meticulous woodcuts, his reality-warping geometries and astonishing tessellation and pleasantly unnerving defiances of gravity partway between optical illusion and dream, were a hallmark of the lonely patience of creative work, which often left him feeling like a “miserable fanatic,” “always wandering around in enigmas,” afflicted by an “association-mania.”
Like Carson, who found in music the concentration and consecration of her work, Escher never ceased slaking his soul on Bach:

After Carson’s death, two original signed Escher prints were discovered among her belongings. In the final years of his own life, in a token of gratitude for how her work had touched his, he granted the posthumously assembled Rachel Carson Council permission to freely reproduce his prints in their advocacy of the sea for perpetuity. 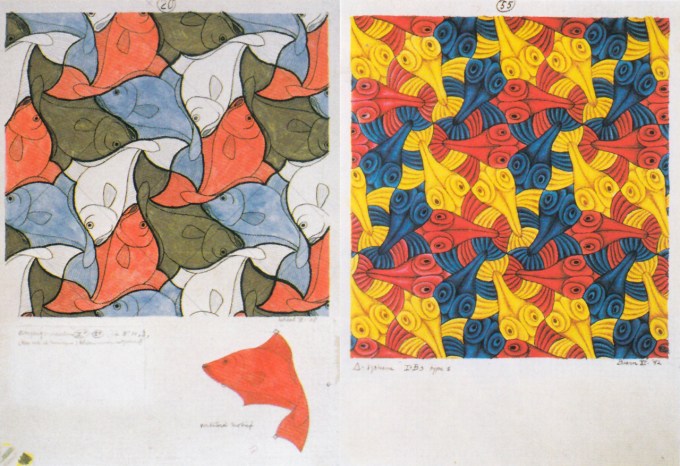 She couldn’t have known it then, but across the Atlantic another visionary was drawing creative succor from her work while reckoning with the same blessed burden of the unexampled.

Those waves! Soon I’m going to try once more to draw something wavelike. But how can you suggest movement on a static plane? And how can you simplify something as complicated as a wave in the open sea to something comprehensible?

Complement with the Trappist monk and theologian Thomas Merton’s stirring letter of appreciation to Carson, then revisit the story of how Carl Sagan inspired Maya Angelou.

“If you write what you yourself sincerely think and feel and are interested in,” Rachel Carson wrote as she contemplated the loneliness of creative work after her unexampled books about the sea made her one of the most beloved writers of her time, “you will interest other people.”

Later, Escher would come to regard his own work as “a kind of small philosophy,” but one that has nothing to do with the literary form philosophy ordinarily takes — rather, his was a philosophy of pleasure and spaciousness: the compositional joy of arranging forms on a plane and giving meaning to each part of it. “It has much more to do with music than with literature,” he wrote.

Wonder-smitten with her writing, Escher wrote to his son:

This swelling obsession eventually led Escher to Rachel Carson’s The Sea Around Us — the lyrical book that had won her the 1951 National Book Award.

She describes that liquid element, with an overview of all its associated facets and problems, in such an enthralling manner, with precision and poetry, that it is driving me half insane. This is exactly the kind of reading material I, with my advancing years, need most: a stimulus from our mother earth for my spatial imagination… It is kindling in me intense inspiration to create a new print.

He had always been curious about the marine world, fascinated by the “fluid mass,” by its creatures and its phenomena — especially the otherworldly wonder of bioluminescence — but this was a calling of a different order and a new urgency.
A human being is not capable of imagining that the flow of time could ever come to a standstill. Even if the earth were to stop turning around its axis and around the sun, even if there wouldn’t be any more days and nights, any more summers and winters, time will continue to flow onward into eternity, that’s how we imagine it.