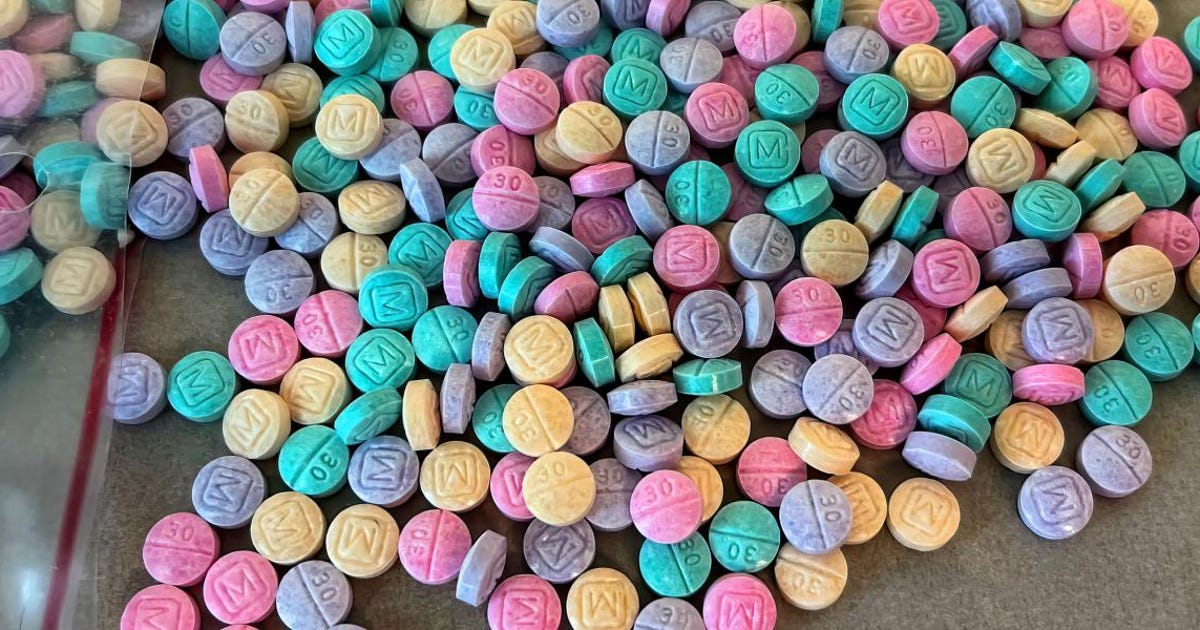 The false rumor is the latest example of a real concern being exaggerated into a manufactured moral panic pushed largely by political figures on the right, who try to exploit fears and whip up outrage about liberal policies around immigration, law enforcement and other issues. Social media has served as a breeding ground for the Halloween candy hoax.
Fentanyl is a synthetic opioid intended to relieve intense pain, and it’s up to 50 times more potent than heroin and 100 times stronger than morphine, according to the US Centers for Disease Control and Prevention. More than 100,000 people died from fentanyl overdoses in the US from April 2020 to April 2021, and the drug was the leading cause of death for adults 18 to 45 years old.
Though the DEA doesn’t see any signs of drug dealers planning to give kids disguised fentanyl pills on Halloween, there was a case of pills being hidden in repurposed candy packages. On Oct. 19, authorities at Los Angeles International Airport seized 12,000 pills believed to contain fentanyl. The suspect had tried to sneak them through a security checkpoint and onto a plane by emptying out individual candy bags and boxes and refilling them with the tablets. Officials told the Los Angeles Times that it’s unlikely the pills would’ve been passed off as candy, calling the maneuver “a concealment tactic.”
In August, the US Drug Enforcement Administration put out a warning about “rainbow fentanyl,” colorful versions of the highly addictive opioid drug that could appeal to younger people. Springing from the report were unfounded concerns over children and Halloween, despite the head of the DEA saying there’s no indication of a real threat.
But in September, DEA Administrator Anne Milgram told NBC News that the agency didn’t see anything indicating that fentanyl pills will be put in Halloween candy.
Halloween is no stranger to urban myths — think razor blades in apples or poison in candies, decades ago. This year, a new hoax is spreading on social media, warning parents to watch out for drug dealers giving trick-or-treaters fentanyl pills disguised as candy. But there’s no evidence of it being true.
“We have not seen any connection to Halloween,” Milgram said again, two days later, on Fox News.
Some of the more notable names spreading this rumor are Florida Attorney General Ashley Moody; Republican National Committee Chair Ronna McDaniel and Rep. Majorie Taylor-Greene, a Republican from Georgia. Even Chuck Schumer, the Democratic Senate Majority leader, briefly referenced Halloween when discussing the dangers of rainbow fentanyl.