First, it is vastly more likely that Frege obtained his knowledge of Stoic logic from one text, rather than from browsing through the dozens of Greek and Latin works with testimonies on Stoic logic that Prantl brings together. (Of the hundreds of Stoic logical works, not one has survived in its entirety and we are almost completely dependent on later ancient sources.) Second, virtually all parallels between Stoics and Frege are present in Prantl, and some important elements of Stoic logic without parallels in Frege are missing in Prantl… Third, there are several misunderstandings or distortions of Stoic logic in Prantl which do have parallels in Frege.
Professor Bobzien doesn’t come to any conclusions about whether Frege’s plagiarism, if it is that, was intentional. She considers several possibilities in the conclusion to her chapter. She even considers the possibility that, “against all odds, Frege did not draw on Stoic logic”: 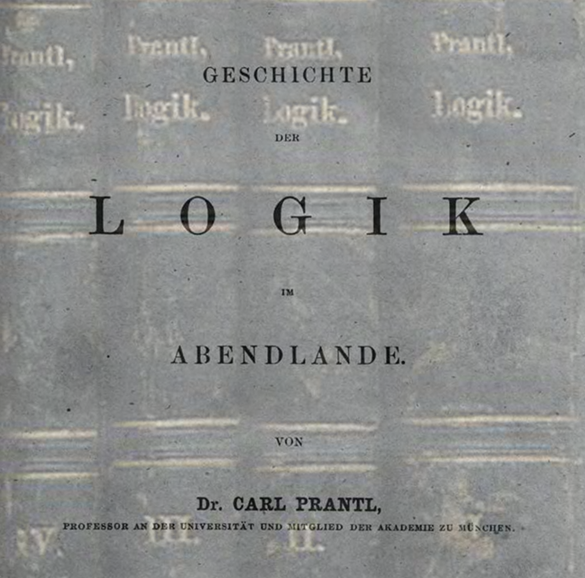 This one concerns universality:

She makes the case in “Frege Plagiarized the Stoics,” a chapter in the 2021 edited collection, Themes in Plato, Aristotle, and Hellenistic Philosophy: Keeling Lectures 2011-18.
Frege “helped himself generously to Stoic logic” without ever crediting the Stoics or the author whose writings were his likely source about their ideas, according to Susanne Bobzien, professor of philosophy at Oxford University.
Bobzien argues that Carl Frantl’s Geschichte der Logik im Abendland was Frege’s source for the Stoic ideas he borrowed.

Immensely fascinating indeed.
Then we have the following immensely fascinating situation. Separated by over two millennia, we witness logicians who started (a) with the same general idea of content that—in some sense at least—exists independently of our saying or thinking it, and (b) with the same general conception of a propositional logic. These logicians were then confronted by the same set of problems: problems regarding how linguistic expressions can serve us to express and communicate that imperceptible content and can explain the complexity of content (especially as it is required for reasoning); how for this purpose natural language expressions may fall short in several ways: in particular how they may contain too much or too little or the wrong expressions, and how they may not provide the means to unambiguously express content of potentially unlimited complexity. In this case, independently of each other, both the Stoics and Frege would have thoroughly considered all four issues, and in doing so would have followed staggeringly similar pathways. 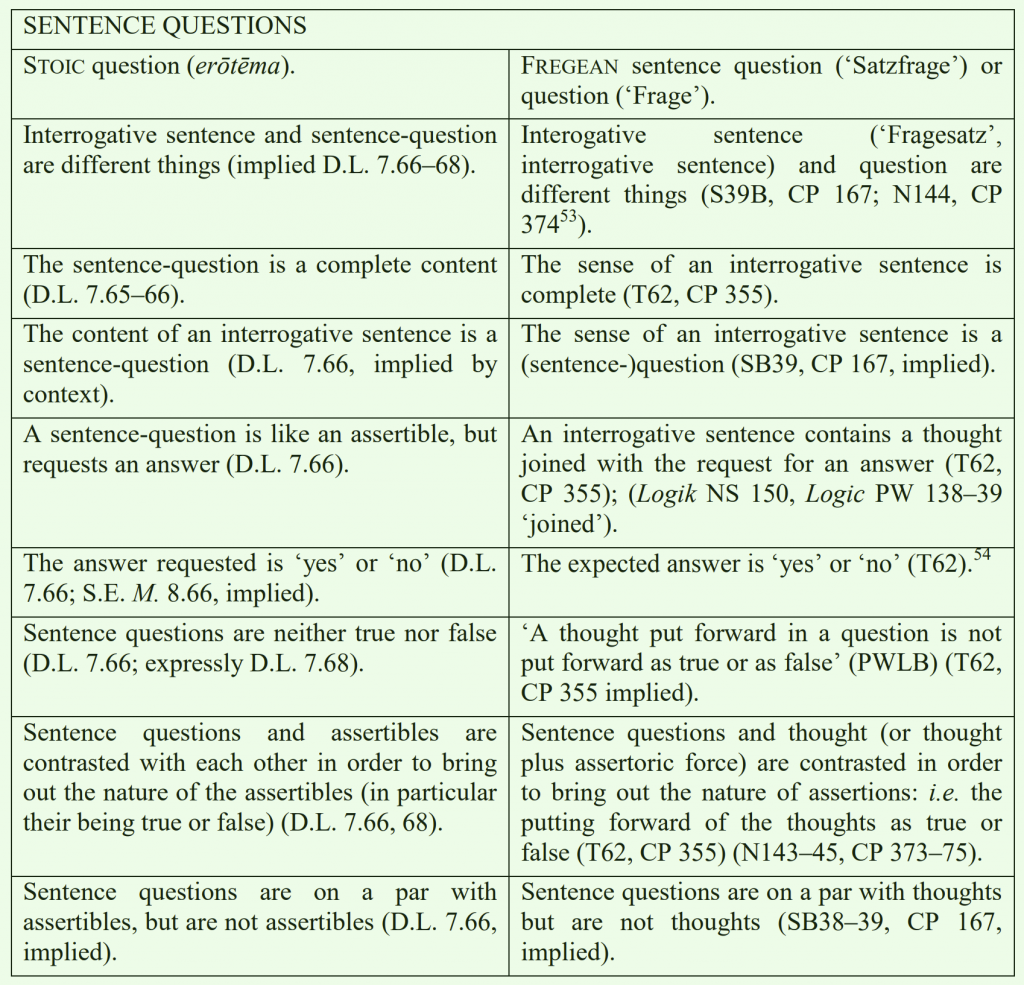 Here are two of the many tables of textual similarities Professor Bobzien assembled. The Stoic ideas are in the left column, Frege’s are in the right. (You’ll have to consult pages 72-74 of the chapter manuscript for the abbreviations.) This table concerns sentence questions: 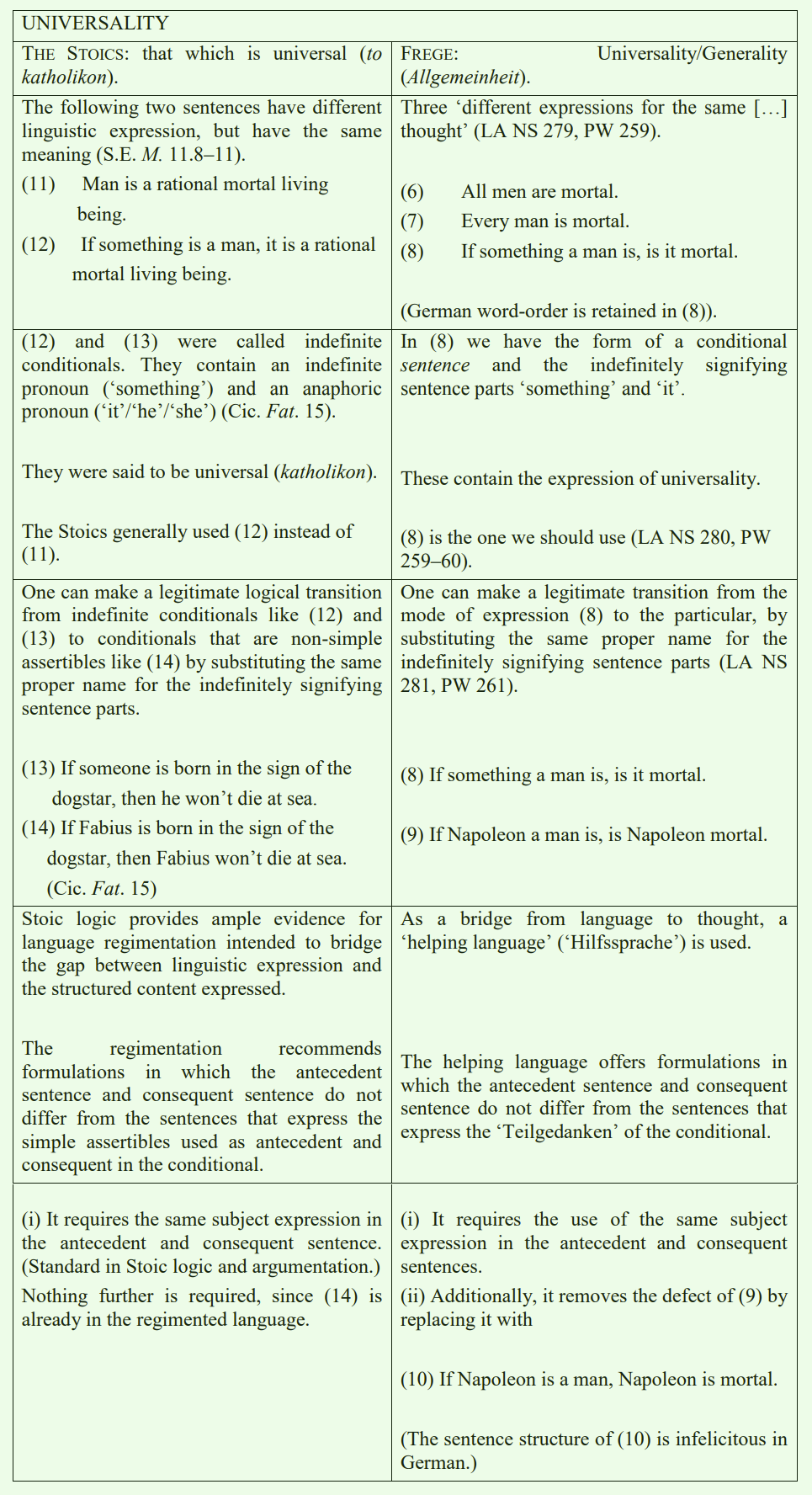 Professor Bobzien provides substantial textual evidence of remarkable similarities between Frege’s writing and the ideas of the Stoics, as presented in Carl Prantl’s 1855 4-volume Geschichte der Logik im Abendland (History of Western Logic). She writes:
No single textual parallel validates the thesis of plagiarism. It is by accruing passage by passage, sentence by sentence, phrase by phrase, the Stoic elements in Frege’s oeuvre, organizing them by (Stoic) topic, and considering their philosophical significance (and adding to this the historical data provided above) that a compelling case is built. Taking in the result requires patience on the part of the reader. Those who are less interested in the philosophical implications of the parallels can directly consult the tables with synopses added for each topic in order to facilitate absorption of the semblances at a glance.
I reproduce two of those tables below as examples. All told, she counts up at least 120 “parallels” between Stoic ideas and Frege’s writings. Professor Bobzien adds to this collection of parallels three other lines of argument to support her conclusion that Frege plagiarized the Stoics by way of Frantl: