The world’s leading climate scientists released a 2018 report on climate change as part of The Paris Agreement, warning that we have until only 2030 to keep global warming to a maximum of 1.5 degrees Celsius (2.7 degrees Fahrenheit). If that number is surpassed, the chance of droughts, floods and extreme heat across the planet will be significantly increased, which could prove catastrophic.
President Joe Biden is set to sign an executive order on Wednesday that aims to see federal operations achieve net-zero emissions by 2050. The order outlines five goals focused on transitioning federal government infrastructure, which includes more than 300,000 buildings and 600,000 trucks and cars, to “zero-emission vehicles and buildings powered by carbon pollution-free electricity,” said the White House.

President Joe Biden walks on the South Lawn of the White House on Dec. 8.

The White House said the new bipartisan infrastructure law and the president’s Build Back Better Act will provide funding to meet the goals in the executive order.
Catch up on the biggest news stories in minutes. Delivered on weekdays.
The government will move away from purchasing gas-powered vehicles and instead shift to electric vehicles with the goal of reaching 100% zero-emission vehicle acquisitions by 2035. The order also calls for new and existing federal buildings to “increase water and energy efficiency, reduce waste, electrify systems and promote sustainable locations for federal facilities,” in order to hit net-zero building emissions by 2045. 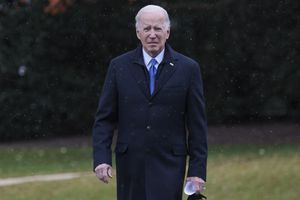