Bryant writes:
To study how trees grow is to admire not only their persistence but also their imagination. Live wood just won’t quit. Every time you knock it down, it comes back again, but when a plant sprouts back, it is not a random shot, like some finger simply raised to make a point. Rather, the growing tip of any stem — what botanists call the meristem — answers with an inborn, complex pattern, like a musical tune.
As soon as the tune is played, the initial reiteration is the first major branch. As a leafy tree grows, it will generate what arborists call scaffold branches. These are the few — maybe five to eight — very large stems upon which the tree will hang most of its crown — that is, most of its smaller branches and their millions of leaves… The skill of the tree as an organism is like Coltrane in his vamping: it brings the variations back to the persisting theme.

Old Growth is a trove of wonder and wisdom in its entirety. Complement this fragment with Dylan Thomas’s short, splendid poem about trees and the wonder of being human, Thoreau on the true value of a tree, and forester and biomimicry pioneer Janine Benyus on how the astonishing science of “tree islands” illuminates the key to resilience.

What unfolds in this dying stage is a process known as Phoenix regeneration:

Out of these six choices, each plant plays its tune, the phrase that has characterized its kind for millions of years. No matter where its seed sprouts, each will try to play its melody.

The tree does this by a process of deft improvisation attuned to the myriad chance-conditions and events of its environment, changing the scale of its melody as needed. (This reminds me of Coltrane’s own observation that jazz musicians are born with a certain feeling “that just comes out no matter what conditions exist.”) Botanists call the tree’s responsive improvisation reiteration. Bryant writes:

In his classic love letter to trees, penned long before the science of reiteration was understood, Hesse observed that trees “struggle with all the force of their lives for one thing only: to fulfill themselves according to their own laws” — that is, to play their tune. But as much as they might be, in Hesse’s words, “the most penetrating preachers” in the art of living, they have at least as much to teach us about the art of dying. Beyond the already disorienting science of why a tree, like a human being, is partly dead throughout life, trees are living testaments to Richard Dawkins’s wonderful perspective on the luckiness of dying, virtuosos at the art of letting life go with the same purposeful poise with which it is lived. 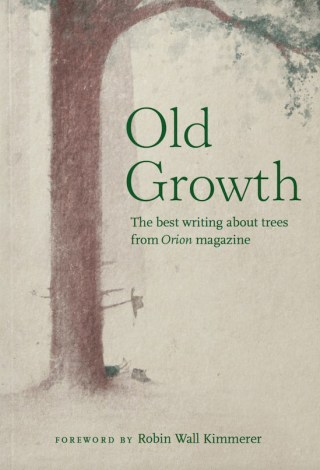 It is as though a person rested her arm on the dirt, spread out her palm, and two perfect new arms emerged from her lifeline, complete with all the muscles and tendons and circulation, the hands, palms, fingers, and fingernails. Or perhaps more accurate, as though a person lay down at night and had two new people overnight sprout from his torso, complete from toenails to cowlicks. I think John Coltrane would have loved phoenix regeneration. It is like those moments in “My Favorite Things” where the whole piece seems about to jump off the top end of the soprano sax register, but suddenly the tune takes up again.

Recounting his encounter with a colossal long-fallen Osage orange tree, from the dead trunk of which two miraculous former branches had risen vertically as new trunks lush with life, Bryant returns to his musical improvisation analogy:

It is jazz: take the tune, stretch it, cut it into pieces, put them back together, transpose it up or down, flatten it out, or shoot it at the sky. Each tree gets its chops, gets its charts, and then throws them away. It knows the chart by heart, and so can repeat it with a thousand variations for hundreds of years, as it grows to its full stature, lives among its peers, and grows back down to the ground. Positive and negative morphogenesis, they dubbed the cycle: growing up and growing down.
He draws out the musical analogy, reflecting on Charlie Parker’s famous advice to young musicians on the steps to becoming a true jazz artist: learn the instrument, learn the tunes, and only then soar with the skilled freedom of improvisation that makes jazz. Pointing to Coltrane’s “My Favorite Things” as a perfect embodiment of that three-step triumph, Bryant writes:

In an essay titled “The Things Trees Know,” Bryant writes:

Little by little, a tree loses its crown, first small branches, then larger ones. Roots decay. The circulation system that carries water aloft to the leaves starts to break down. When no leaves emerge on a branch, it can no longer feed itself. It dies and falls to the ground, but the tree does not give up. When a giant that was once ninety feet tall has shrunk to a height of twenty feet, little images of itself may sprout from the lower trunk or even from the root flare, wherever a living connection between root and branch survives… It is not impossible that one or the other of those last sprouts — if only they can generate their own stable root systems — may grow once again to ninety feet tall… Potentially, every tree is immortal.

It begins with a perfectly clean statement of the tune, beautiful in itself for the richness of its tone, notes that are almost solid, so you could build a house out of them. Within three minutes, the tune has modulated into completely unexpected shapes, sizes, rising and falling glissades, stops and starts, pianissimos to fortes, but it never loses the thread of that original tune. Every tree is a jazz player, in just this way, although where a long Coltrane piece might last a quarter hour, a tree’s performance may go on for half a millennium or more.

Understanding a particular tree, Bryant argues, is a matter of discerning “its notes, its scales, its sharps, its flats, and its time signatures.” In the 1970s, the botanists Francis Hallé, Roelof Oldeman, and P. B. Tomlinson identified six sets of choices, which serve as the chords that every tree combines to compose its particular tune: to branch (most trees) or not to branch (palms); if branching, to branch only at the base of the stem or all along it; to grow new branches only upward (staghorn sumac), only outward (pagoda dogwood), or in some combination of the two; to grow each branch in a continuous upward or downward direction determined at its outset, or to change direction as it grows; to flower at the tips of branches (staghorn sumac) or along their sides (maple); to grow the trunk and branches continuously without rest or to have a dormant season.

So suggests arborist William Bryant Logan in his contribution to Old Growth — a wondrous anthology of essays and poems about trees, culled from the decades-deep archive of Orion Magazine, with contributions as varied as Ursula K. Le Guin and Michael Pollan, and a foreword by the poetic bryologist Robin Wall Kimmerer.

Hermann Hesse believed that if we could learn to listen to the trees, we would achieve profound perspective on our human lives by grasping the deepest meaning of aliveness. He used listening in the metaphorical sense. But the great existential gift of trees — to us in the metaphors they furnish, and to themselves in the materiality of survival — might indeed be a kind of musicality, accounting for their virtuosity at resilience: beyond “the blind optimism” of a tree’s poetic enchantment lies a supersense for listening to the world and responding with inspired ingenuity, encoded with singular wisdom on how to live and how to die.

Growing down is not just decay. It is as active and improvisational as was the building up. Roots are damaged or die. Branches are lost to storms. Hollows open up on the trunk and are colonized by fungi like the wonderful and aptly named dryad’s saddle. The tree’s solid circulation system resolves itself back into discrete pathways, some living and some dead. It becomes obvious that scaffold branches were once separate trees, as they become so again, some maintaining their root systems and others losing them. Now the tips of the higher branches begin to die back. Instead of growing new reiteration branchlets on their undersides, as they did in their youth, they now sprout perfect little trees of their species on the tops of the branches, between the trunk and the dead tips. It is a complete restatement of the thematic tune, happening dozens of times among the still-living branches.