With her hard-won words, she invites the voices of people from various walks of life, people who all play Bach daily to move through their own very different and differently challenging lives — from an elderly organist in Germany to a young cellist and community organizer in Kenya’s largest slum: Bach as meditation, Bach as motivation, Bach as calibration of being. (When we spoke that day from the hospital, I shared with Clemency something hardly anyone in my life knew: that I was a secret cellist, still learning the instrument, playing a single Bach cello suite day after day as I waded through a very different personal loss.)
Bach’s diurnal presence took on a new form after Clemency’s hemorrhage and became an embodied testament to philosopher Josef Pieper’s soulful case for how Bach can save your soul. At first, with her life so brutally transformed, she found it difficult to even listen to his music, hearing in it the echoes of her former life and former self. But she eventually came to see Bach for what he always had been and always would be — the existential soundtrack to aliveness itself.
We feel it to be a matter of course that some day a Bach shall come in whom all those, other Bachs shall find a posthumous existence.
I do not think a day passes in my life in which I fail to look with fresh amazement at the miracle of nature. It is there on every side. It can be simply a shadow on a mountainside, or a spider’s web gleaming with dew, or sunlight on the leaves of a tree. I have always especially loved the sea. Whenever possible, I have lived by the sea.

The essence of what makes Bach the greatest eludes words, but it lies, I think, in the way he combines technical precision with socking great emotion. People often describe Bach as ‘mathematical’ because of the complex, intricate patterns in his music. But he is not clinical or scientific: as a human being he knew intense joy but also wild grief, and there’s never been a composer or songwriter more attuned to the vagaries of the human heart.
Bach’s brain was clearly some kind of supercomputer: he wrote at least three thousand pieces whilst holding down a number of jobs, a couple of wives and twenty children.

The impulse to express poetic and pictorial concepts is the essence of music. It addresses itself to the listener’s creative imagination and seeks to kindle in him the feelings and visions with which the music was composed. But this it can do only if the person who uses the language of sound possesses the mysterious faculty of rendering thoughts with a superior clarity and precision. In this respect Bach is the greatest of the great… A soul that longs for peace out of the world’s unrest and has itself already tasted peace allows others to share its experience in this music.
It is an impulse that is still fundamental to who we are.

And then he discovered Bach.
We are a music-making species — always have been, always will be — and music’s capacity to explore, express and address what it is to be human remains one of our greatest communal gifts… We evolved by coming together around the fire every night, singing songs and telling stories — invariably, telling stories through singing songs. That’s what our ancestors did; that’s how they made sense of the world and each other; that’s how they learned how to be.
Not long before her hemorrhage, Clemency had made a passionate case for a daily dose of music as “a form of sonic soul maintenance” in her book Year of Wonder: Classical Music to Enjoy Day by Day (public library) — the music counterpart to Tolstoy’s Calendar of Wisdom and poet Ross Gay’s yearlong journal of delights. She wrote:
Casals and his generation had awakened to the radiance of Bach thanks to his contemporary and hero Albert Schweitzer (January 14, 1875–September 4, 1965). Although Schweitzer received the Nobel Peace Prize for his ethical-ecological philosophy of “Reverence for Life” — the philosophy that inspired sea-serenader Rachel Carson to dedicate her epoch-making Silent Spring to Schweitzer — music always remained his greatest animating passion.
In Bach, Casals found an analogue for the miracle of nature. Echoing the poet and philosopher of science Loren Eiseley’s poignant observation that “we forget that nature itself is one vast miracle transcending the reality of night and nothingness… that each one of us in his personal life repeats that miracle,” Casals reflected on his profound personal connection to nature, of which his love of music was an expression — a way to feel more alive, more awake to the wonder of aliveness:
He adds a poetic corollary to this eternal and aggregate nature of art:

Bach is thus a terminal point. Nothing comes from him; everything merely leads up to him…. This genius was not an individual, but a collective soul. Centuries and generations have laboured at this work, before the grandeur of which we halt in veneration. To anyone who has gone through the history of this epoch and knows what the end of it was, it is the history of that culminating spirit, as it was before it objectivated itself in a single personality.

In exploring Bach as a daily ritual, Clemency draws on the legacy of the legendary Spanish Catalan cellist and conductor Pablo Casals (December 29, 1876–October 22, 1973) — Yo-Yo Ma’s hero and formative influence, widely considered the greatest cellist of all time, who at the age of ninety-three reflected so tenderly on how working with love prolongs your life. Casals began his autobiography by sharing the daily practice that had anchored him to his own life since the day he first fell under Bach’s enchantment:

There is his violin solo in E major that always comes as “a shot of musical caffeine” for Clemency: “In just a hundred seconds or so,” she writes, “this piece has the effect of apparently rearranging the molecules around me, making me see and think more clearly.”

For the past eighty years I have started each day in the same manner. It is not a mechanical routine but something essential to my daily life. I go to the piano, and I play two preludes and fugues of Bach. I cannot think of doing otherwise. It is a sort of benediction on the house… It is a rediscovery of the world of which I have the joy of being a part. It fills me with awareness of the wonder of life, with a feeling of the incredible marvel of being a human being. The music is never the same for me, never. Each day it is something new, fantastic and unbelievable.

Schweitzer — born almost exactly 200 years after Bach, to a minister and a pastor’s daughter — was five when his father began giving him music lessons on the piano inherited from his organist grandfather. Before his legs were long enough to reach the pedals, the boy began playing the organ himself. By nine, he was substituting for the church organist at service.
The sea and Bach were always intimately connected for Casals, who fell under Bach’s spell at thirteen. One saltwater-scented afternoon, his father bought him his first full-sized cello — an instrument looked down upon in Bach’s day, too unworthy to compose solos for. Father and son then walked to a musty old music shop in the nearby harbor — Casals never forgot “its faint smell of the sea” — where he acquired his other great portal into the “magic and mystery” of music: a yellowed sheaf of scores, faded with age, bearing the title Six Suites for Violoncello Solo, imprinted with “J.S. Bach.” They became his most cherished music. 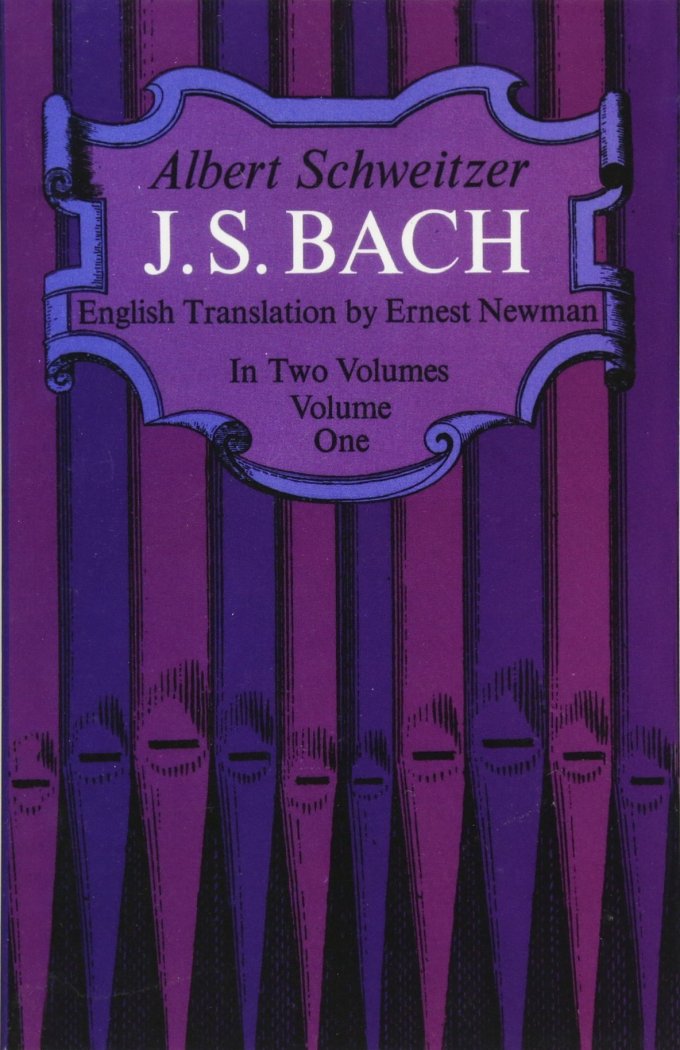 In 1902, Schweitzer spent his autumn vacation writing an essay to get the students at the Paris Conservatory excited about Bach. He quickly found himself with much more to say — so much more that, after using his meager funds to purchase a copy of Bach’s hard to find and extravagantly priced complete works, he spent the next two years turning the essay into a 455-page book that introduced the world to Bach the artist; the book that magnetized a largehearted embrace when Casals met Schweitzer in the 1930s.

During the Classical and early Romantic eras that followed Bach’s, his music fell out of favor and slipped into academic obscurity, relegated to a thing of theory, syphoned of transcendence. The young Schweitzer, serving as an organist to the Paris Bach Society that he had co-founded while completing his doctoral dissertation on the spirituality of Kant’s philosophy at the Sorbonne, grew increasingly restless at this erasure of wonder and took it upon himself to remedy it. In those first years of the twentieth century, the only Bach material available to French readers — even those who cherished and played music — were only dry biographies that presented him as a cold mathematician of sound. A musician himself, Schweitzer longed to talk to other musicians and lovers of music about “the real nature of Bach’s music and its interpretation” — to resurrect Bach the artist, the enchanter, the virtuoso of feeling, the prophet of transcendence.
[…]
His passionate appreciation of Bach never left him. A decade later, as he headed for Africa to do the work out of which his philosophy of “Reverence for Life” arose — the work that earned him the Nobel Peace Prize and Rachel Carson’s devotion — Schweitzer brought with him a pedal piano the Paris Bach Society had given him as the closest thing to an organ one could bring to the tropics so he could continue his daily Bach. In his autobiography, he reflected:
Along the protracted trajectory of her recovery, both physical and psychological, Clemency began not only listening to but playing Bach every single day. “To recover the Bach in me,” she says in her stunning BBC piece about the experience — her first word-work since that savage January day, and the most moving audio artwork I have heard in epochs.
Multiple surgeries and weeks of rehabilitation began restoring Clemency’s comprehension and sight, but the right side of her body remained paralyzed and her speech voided. Slowly, slowly, the words started forming again out of the primeval matter of the mind. Eventually, we spoke — Clemency still in her hospital bed, skull bandaged and face radiant with life, each word a triumph, as deliberate and precise as a Bach note. I found myself wondering what the world might look like if we spoke to each other that way, our words tender with our mortal fragility, resolute with reverence for the aliveness in us and in each other, this grand shared mystery.

There is his Ave Maria in early June, and his Partita no. 2 in D Minor on my late-summer birthday, and on my father’s autumnal equinox birthday a chorale cantata translating to “As a father has mercy.” (This, too, is Bach’s singular enchantment — how we project ourselves onto him and focus our own existence through his lens.)

A generation after him, a young woman discovered that when the mind is suddenly unmattered, Bach remains.