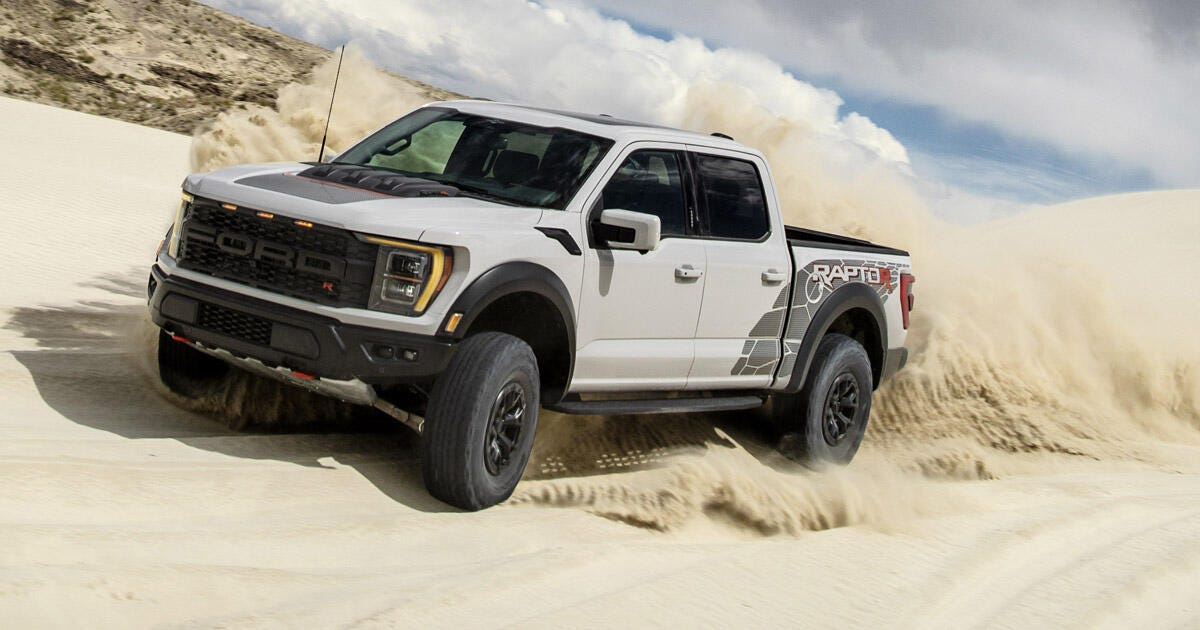 Ford on Monday unveiled the 2023 F-150 Raptor R. Under the hood is a 5.2-liter supercharged V8 that Ford first used on the Mustang Shelby GT500. In this truck, it makes a properly ludicrous 700 horsepower and 640 pound-feet of torque. That’s just 2 hp and 10 lb-ft under the Ram 1500 TRX.
We’ve known for a while that Ford was coming out with the F-150 Raptor R, a more hardcore version of the already-wild Raptor. Now, it’s here, and we finally have all the juicy specs you’re lookin’ for.
Inside, there are standard Recaro seats covered in black leather and Alcantara suede. Carbon fiber adds a bit of raciness, and a unique weave keeps it from looking boring. A 12-inch touchscreen running Ford’s Sync 4 infotainment system is standard, and it includes Apple CarPlay, Android Auto and over-the-air updates. The standard Raptor’s aesthetics are already quite burly, but there’s always some room for improvement. On the Raptor R, Ford increased the hood’s dome size by about 1 inch for better air extraction. The grille, bumpers and fender flares are painted black, while orange R badges adorn the grille, power dome and tailgate. There’s also a unique graphic on the rear fenders.
The interior has carbon fiber, which is a little played out these days, but a unique weave gives the trim some added character that help sets it apart.

Ford could’ve just slapped a V8 under the hood and called it a day, but the Raptor R needs to have the durability to have the absolute snot beat out of it. A larger oil pan will let the truck handle grades without worrying about oil starvation, while a larger intake and new oil cooler should help keep gases and liquids from getting too hot. The Raptor R also picks up a new front axle, a larger aluminum driveshaft, as well as an active exhaust system with pass-through mufflers and valving that changes the exhaust note based on vehicle mode.
Of course, a Mustang V8 would work in an F-150 without many changes, but Ford revised the Raptor R’s engine a bit for use in an off-road truck. The automaker tweaked the supercharger and replaced its pulley to boost low- and mid-range torque, which is the operating range that Ford says customers use most often. A 10-speed automatic transmission is standard, delivering power to all four wheels, and Ford beefed up the torque converter to better deliver that power when and where it’s needed. Ford didn’t give any 0-to-60 times, but it has to be pretty close to the TRX’s 4.5-second time.
Since the Raptor is all about blasting through the desert as fast as possible, the Raptor R’s suspension looks up to that task. Fox Live Valve shocks are hiding behind those beefcake body panels, and combined with some massive coil springs, the Raptor R offers 13 inches of wheel travel in the front and 14.1 inches in the rear. Standard ground clearance is an impressive 13.1 inches, and its standard 37-inch all-terrain tires should provide plenty of grip when the asphalt disappears. 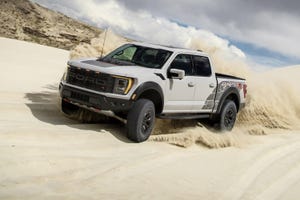