Leaning on his training as an etymologist — that is, an evolutionary biologist for the living organism of language — Thomas adds:
With his pliant logic and playful love of the human condition, Thomas considers the reflexive conclusion to which this awareness might lead the inattentive:
If it had been arranged that way, we’d all still be alive forever but, in the nature of things, we would still be those same archaebacteria born 3.7 billion years ago, unable to make molecular errors, deprived of taking chances, and therefore never blundering into brains.
With great subtlety and sensitivity, Thomas then pirouettes to observe that this stochastic miracle of life across time exists only because death too exists. A generation before Richard Dawkins made his poetic point about the luckiness of death and an epoch after the grief-stricken Darwin, having lost his most beloved child, found personal solace in the scientific fact that the death of the individual is what fine-tunes evolution to ensure the survival of the species — “there is grandeur in this view of life,” Darwin wrote — Thomas dismantles the central logical fallacy beneath our species’ fantasies of immortality, be they retro-religious or techno-futuristic.
Complement this fragment of The Fragile Species — which remains one of the finest, most fiercely humanistic and scientifically perspectival books I have ever read — with philosopher Martha Nussbaum on how to live with our human fragility and the forgotten visionary William Vogt, writing half a century before his ideas shaped the modern environmental movement, on our interdependence resilience, then revisit Lewis Thomas on our wiring for mutuality and his science-rooted existential meditation on the medusa and the snail — still the subtlest, sanest thing I have read about the eternal mystery of the self.

I even have troubles of my own with evolutionary biology. Not first principles, mind you, not the big picture, mostly just the details. I understand about randomness and chance, and election, and adaptation, and all that, and I now know better than to talk, ever, about progress in evolution, never mind purpose. My problems come when I think about the earliest form of known life, those indisputable bacterial cells in rocks 3.7 billion years old, our Ur-grandparents for sure, then nothing but bacteria for the next two and one-half billion years, and now the chestnut tree in my backyard, my Abyssinian cat Jeoffry, the almost-but-not-quite free-living microbes living in all our cells disguised as mitochondria, and, just by the way, our marvelous, still-immature, dangerous selves, brainy enough to menace all nature unless distracted by music.
We are different, to be sure, but not so much because of our brains as because of our discomfiture, mostly with each other. All the other parts of the earth’s life seem to get along, to fit in with each other, to accommodate, even to concede when the stakes are high. They live off each other, devour each other, scramble for ecological niches, but always within set limits, with something like restraint. It is a rough world, by some of our standards, but not the winner-take-all game that it seemed to us awhile back. If we look over our shoulders as far as we can see, all the way past trillions of other species to those fossil stromatolites built by enormous communities of collaborating microorganisms, we can see no evidence of meanness or vandalism in nature. It is, on balance, an equable, generally amiable place, good-natured as we say.

With so fetching a wink, Thomas turns to the real object of his meditation: our native inability to comprehend how the same processes that begot these remote abstractions also begot the fleshy, feeling concreteness of us. There is something incredibly lovely about Thomas’s warm humor — here is man of extraordinary intellect, scientific erudition, and uncommon human sensitivity, inviting the rest of us, far more ordinary and modestly lettered, to join him in his gladsome bafflement at the seeming miracle of life:

When it became clear that a mysterious substance is holding each galaxy together, keeping each world’s orbit a perfect corolla around the stigma of its star, we gave that substance a name befitting an abominable mystery: dark matter.
But this, of course, is Lewis Thomas. And this, therefore, is not a case for vacuous materialism. This is Lewis Thomas, who often makes the deepest point by caricaturing its shallow opposite:

Although he had art on his mind, Van Gogh was contouring a deep scientific truth, a truth both existential and evolutionary, when he observed how inspired mistakes propel us forward. 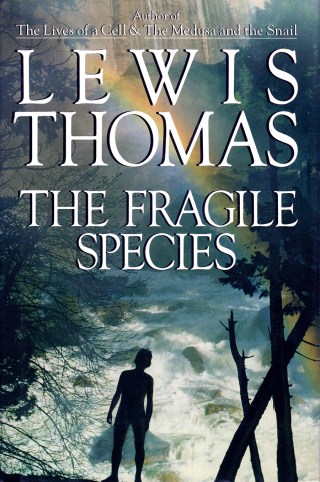 I like the word stochastic better, because of its lineage in our language. The first root was stegh, meaning a pointed stake in the Indo-European of 30,000 years ago. Stegh moved into Greek as stokhos, meaning a target for archers, and then later on, in our language, targets being what they are and aiming arrows being as fallible as it is, stokhos was adapted to signify aiming and missing, pure chance, randomness, and thus stochastic. On that philosophical basis, then, I’m glad to accept all of evolution in a swoop, but I’m still puzzled by it.

What might save us from ourselves, Thomas intimates, is not our maturity but our mutuality:
When Earth first erupted with color, flowers took over so suddenly and completely that, two hundred million years later, the baffled Darwin called this blooming conquest an “abominable mystery.”

Nature is an immense mechanism, operating itself in accordance with the laws of physics. We, and our brains, are working parts of the machinery, having made our appearance here and having our existence because of the operation of those laws, set in place on what we like to see as the pinnacle by the beneficent operation of chance and quantum mechanics. Pure luck, indeterminate and intentionless, all the way.

Along the way, we — thinking, feeling, meaning-hungry creatures — kept trying to make beauty of the truths we found, composing poems about flowers and poems about dark matter as we composed our equations and our theories.

In the opening essay, originally delivered as a talk in 1987 for the fiftieth reunion of his Harvard Medical School class, Thomas reflects on the splendid bafflements of science since he and his classmates parted ways in the prime of their lives half a century earlier. With his signature winking genius, he writes:

In a passage of extraordinary prescience, precisely in the context of our present ecological precariousness and what its only solution might be, Thomas adds as he considers our place in the family of life:
Reality’s ability to continually baffle us with what we don’t yet know, and our willingness to continually plumb the unknown for new truth and beauty, even as it baffles and terrifies us, is the loveliest thing about being alive. Being alive together, as members of this boundlessly inquisitive and imaginative species, is the loveliest thing about being human.

That is what Lewis Thomas (November 25, 1913–December 3, 1993) — a scientist, poet, and perhaps my favorite writer about the native poetics of reality — explores throughout his altogether exquisite final essay collection, The Fragile Species (public library).

I cannot count the number of new items of ignorance I’ve picked up in fifty years; the list is simply too long. Instead, I have prepared another kind of list, shorter, more personally humbling, of some things I think I might have been learning more about if I hadn’t been so puzzled all those years by medicine itself. There are matters that I assume most other people my age comprehend nicely, and I never got round to studying.

That is, if we could be immortal, we could not exist; if we were already perfect, we could not exist. It is only because we are mortal and imperfect, you and I and Dickinson and Darwin, that the sum of us, the galaxy of humanity drifting through impartial stars, goes on.

This view takes us a long distance toward understanding our place in nature, but not quite the full distance. We are still stuck with the problem of consciousness, and because of this not-quite-settled matter, we are stuck as well with the incessant questions with which our consciousness continues to plague us and disturb our sleep (for which also, by the way, we do not have a good explanation). Questions like: Are we the only creatures on the whole planet with real consciousness? Why is being being; why not nonbeing? Why should there be something, instead of nothing? How do you organize a life, or a society, in accordance with physical laws that forbid purpose, causality, morality, and progress, especially when you have to do so with brains that stand alive with these very notions? Where’s the fun in it?

We are the anomalies for the moment, the self-conscious children at the edge of the crowd, unsure of our place, tending to grabbiness… But we are not as bad a lot as some of us say… At our worst, we may be going through the early stages of a species’ adolescence, and everyone remembers what that is like. Growing up is hard times for an individual but sustained torment for a whole species, especially as brainy and nervous as ours. If we can last it out, get through the phase…. we might find ourselves off and running again.

We are more compulsively social, more interdependent and more inextricably attached to each other than any of the celebrated social insects… One human trait, urging us on by our nature, is the drive to be useful, perhaps the most fundamental of all our biological necessities. We make mistakes with it, get it wrong, confuse it with self-regard, even try to fake it, but it is there in our genes, needing only a better set of definitions for usefulness than we have yet agreed on.

The Federal Reserve System is at the top of my list. I’ve never known what it was or what it did or how it did it, and what is more I don’t want to be told. The same goes for the stock market, and for the bond market, and the word processor (one of which I actually possess and am baffled by), and the internal combustion engine, and the universe, black holes, galactic mirrors, those other universes, and space-time. Most of all, space-time. I cannot get ahold of it.

This is a very big place, and I do not know how it works, or how I fit in. I am a member of a fragile species, still new to the earth, the youngest creatures of any scale, here only a few moments as evolutionary time is measured, a juvenile species, a child of a species. We are only tentatively set in place, error-prone, at risk of fumbling, in real danger at the moment of leaving behind only a thin layer of our fossils, radioactive at that.
In another essay from the book, in a passage from which the entire book borrows its title, Thomas writes at the peak of the Cold War and its menacing specter of nuclear catastrophe, which has since only changed costume as the ecological catastrophe menacing our own time:

When earthlings first realized that our Milky Way is not the cosmic whole but one galactic particle of the whole — one of unfathomably many galaxies, each abloom with billions of stars orbited by other worlds — the universe suddenly appeared “so brutal and alive it seemed to comprehend us back.”

We need a better word than chance, even pure chance, or that succession of events, while still evading any notion of progress. But to go all the way form a clone of archaebacteria, in just 3.7 billion years, to the B-Minor Mass and the Late Quartets, deserves a better technical term for the record than randomness.

With an eye to various speculative proposals — which have grown all the more various and more unsoundly speculative in the decades since — about hacking the entropy that frays at all matter in order to attain long-term preservation of information systems, including the information system of us, Thomas considers the inherent syllogism of such hopes: