YouTube on Wednesday suspended Sen. Rand Paul of Kentucky for breaking the company’s rules against spreading misinformation about COVID-19. As part of the suspension, Paul won’t be able to publish videos to his channel for one week.
The infraction gave Paul his first strike under YouTube’s three-strikes policy. According to the company’s guidelines, a first strike typically comes with a one-week suspension that prohibits the posting of new content. A second strike within a 90-day window comes with a two-week suspension. A third strike results in a permanent ban.

In the offending video, the Republican senator denounces the effectiveness of wearing masks to ward off the coronavirus. “Most of the masks you get over the counter don’t work. They don’t prevent infection.” he says in the 3-miniute clip. Later on he adds, “Trying to shape human behavior isn’t the same as following the actual science which tells us that cloth masks don’t work.”

Catch up on the biggest news stories in minutes. Delivered on weekdays.
In a tweet, Paul called the suspension a “badge of honor.”  He continued, “Leftwing cretins at Youtube banning me for 7 days for a video that quotes 2 peer reviewed articles saying cloth masks don’t work.”
The suspension comes as COVID-19 cases have surged because of the highly contagious delta variant. Some counties, including many in Google’s home state of California, have reinstated indoor mask mandates.
Paul’s office didn’t immediately return a request for comment.
YouTube, which is owned by Google, confirmed the suspension. “We removed content from Senator Paul’s channel for including claims that masks are ineffective in preventing the contraction or transmission of COVID-19,” a spokeswoman said. “We apply our policies consistently across the platform, regardless of speaker or political views, and we make exceptions for videos that have additional context such as countervailing views from local health authorities.” 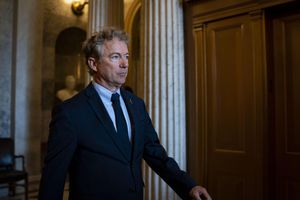