On the eve of the Wall Street Crash of 1929, Rosalie Edge, in her dress and her greying bun, walked across Central Park to the twenty-fifth annual gathering of the National Association of Audubon Societies. There, she calmly rose from the back to hold its leaders accountable for the practices revealed by the pamphlet. After a stunned silence, various men in power took took turns with defensive stabs at her credibility, then derided the rhetorical style of the pamphlet without addressing its substance.
Rosalie Edge (November 3, 1877–November 30, 1962) was well into her fifties when she became invested in the plight of birds after reading about the slaughter of 70,000 bald eagles in Alaska. She would later write:
I first came within the aura of Edge’s influence during my long immersion in Rachel Carson world in the research for Figuring: Edge — who died months after Silent Spring raised its epoch-making voice of ecological conscience, and who never lived to see it inspire the creation of Earth Day and the founding of the Environmental Protection Agency — had been an early voice of dissent and admonition against the heedless use of pesticides. She had furnished Carson, who visited Hawk Mountain two decades earlier, with key DDT data about the pesticide’s savaging impact on birds.

Within a single migration cycle, hawk populations improved dramatically. The sanctuary became a pioneering model of conservation, replicated by other conservationists in other habitats to protect other species. Nearly a century later, it is the world’s most active site of raptor conservation and observation.

As soon as she returned to America, still thinking about the eagles, Edge turned her wakeful intellect and indomitable passion for justice toward the broader fate of feathered beings in the hands of the thumbed.

Within a quarter century — a span in which she would change the course of culture and the vitality of nature for centuries to come — she would be celebrated on the pages of the nation’s most esteemed cultural journal as “the only honest, unselfish, indomitable hellcat in the history of conservation.” Those whom she held uncomfortably accountable would deride her as “a very hot potato” and a “common scold” — but that accountability would revolutionize policies and mindsets. She would become things the words for which — words all of us now live with, for things many of us are living — did not yet exist in the popular lexicon: dissident, activist, citizen scientist.
On the horizon to the north, formed by a series of seven peaks running almost at right angles to the ridge on which we sit, an indistinct blur takes form against the sky. Second by second the outlines sharpen. Soon the unmistakable silhouette of a hawk is etched on the gray.
Edge’s understanding of ecological relationship… set her apart from most conservationists of her time. Her concern for all species and her opposition to most hunting were shared by animal welfare activists, including many of the women who opposed the plume trade. But while Edge hated cruelty to individual animals, she devoted most of her energy to preventing the extinction of species.
[…]

Perhaps it is not strange that I, who greatly love the sea, should find much in the mountains to remind me of it. I cannot watch the headlong descent of the hill streams without remembering that, though their journey be long, its end is in the sea. And always in these Appalachian highlands there are reminders of those ancient seas that more than once lay over all this land. Halfway up the steep path to the lookout is a cliff formed of sandstone; long ago it was laid down under shallow marine waters where strange and unfamiliar fishes swam; then the seas receded, the mountains were uplifted, and now wind and rain are crumbling the cliff away to the sandy particles that first composed it. And these whitened limestone rocks on which I am sitting — these, too, were formed under that Paleozoic ocean, of the myriad tiny skeletons of creatures that drifted in its water. Now I lie back with half closed eyes and try to realize that I am at the bottom of another ocean — an ocean of air on which the hawks are sailing.

When Edge and Van Name founded the Emergency Conservation Committee, the language of ecology was still unfamiliar, even within the conservation movement. The concept of the food chain, sometimes called the food web, had been proposed only three years earlier by the British ecologist Charles Elton. The word “ecosystem,” commonly used in ecology and conservation to describe an assemblage of interacting species and their physical surroundings, would not be coined until 1935. Many scientists — and most of the general public — continued to think of the living world as an assembly of relatively independent parts, not an interconnected whole.

To Edge, this was only evidence that something was amiss, that she must persist until it is righted.
They came by like brown leaves drifting on the wind. Sometimes a lone bird rode the air currents; sometimes several at a time, sweeping upward until they were only specks against the clouds or dropping down again toward the valley floor below us; sometimes a great burst of them milling and tossing, like the flurry of leaves when a sudden gust of wind shakes loose a new batch from the forest trees.
Until that point, her fierce wakefulness to justice had been channeled toward the plight of half of her own species, which culminated with the ratification of the Nineteenth Amendment in 1920. But the multigenerational triumph left Edge — who had spent years composing pamphlets, delivering speeches, and serving as secretary-treasurer of the New York State chapter of the Woman Suffrage Party — with the postpartum hollowing of spirit that follows the completion of any project into which one has poured all of oneself.

Edge’s family summoned her for dinner, but she kept pacing the room in fiery disbelief, later recalling:
The birds and animals must be protected not merely because this species or another is interesting to some group of biologists, but because each is a link in a living chain. 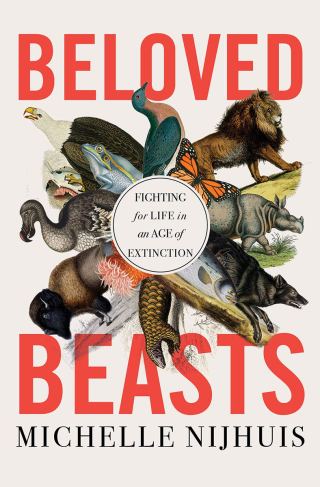 It is 1928 and you are walking in Central Park, saxophone and wren song in the April air, when you spot her beneath the colossal leafing elm with her binoculars. You mistake her for another pearled Upper East Side lady who has taken to birding in the privileged boredom of her middle age. And who could blame you? In some obvious ways — polished and traveled, born into a wealthy New York family to a British father whose first cousin was Charles Dickens — she bears the markings. In some invisible ways — in the strata of personhood that our unchosen surfaces and accidents of birth are apt to conceal and shortchange — she is anything but.

One night while traveling in Europe with her family, Edge found herself reading and rereading a sixteen-page pamphlet — the era’s primary whistleblowing medium — titled “A Crisis in Conservation.” It exposed the ties the nation’s network of Audubon Societies had to gun and ammunition makers and the consequent withholding of protection from species hunters considered pests or targets — including the bird, which this very nation had taken for its symbol and spirit animal: the North American bald eagle.

And so she did. Over the years that followed, Rosalie Edge “stood up very often,” as she later recalled. After seeing a photograph of hundreds of dead hawks neatly lined up on the Appalachian forest floor, she traveled to Eastern Pennsylvania to witness the barbaric tradition that had occasioned the horror: recreational hunters gathering every autumn to shoot thousands of migrating hawks, having stalked out the perfect summit from which to intercept the migration path and perform the mass slaughter.

Complement with Helen Macdonald’s stunning H Is for Hawk, then revisit Carson’s ecological clarion call to the next generations — that is, to us — delivered months before Edge’s death.
In 1934, she borrowed 0 from Willard Gibbs Van Name (not that Willard Gibbs; the American Museum of Natural History zoologist who had first awakened her passion for conservation and with whom she had founded the Emergency Conservation Committee two years earlier), signed a two-year lease with the option of eventually buying the 1,400-acre wilderness for ,000, and hired two wardens — an ornithologically ardent couple from New England — to keep hunters away. And so Hawk Mountain Sanctuary was born. Rosalie Edge was fifty-seven.

Each person profiled here stood, or stands, at a turning point in the story of modern species conservation — a story which, for better and sometimes worse, still guides the international movement to protect life on earth… Though they often used pragmatic arguments to convert others to their cause, their personal motivations ran deeper, for many had started keeping company with members of other species to escape their own troubles. Some were painfully shy, or burdened with mental or physical illness. Some were separated from spouses at a time when divorce was a scandal, or drawn to their own gender when homosexuality was taboo. Most of them knew something about suffering, and they found consolation in the sights and sounds of other forms of life.

For the remaining two decades of her life, Rosalie Edge went on to become one of the most vocal, visible, and effective champions of conservation, inspiring the founding of The Nature Conservancy, The Environmental Defense Fund, and The Wilderness Society; inspiring generations of ordinary citizens with her ethos that the protection of nature is not something to be awaited from above but a basic civic duty for each of us, echoing her contemporary and kindred spirit Eleanor Roosevelt’s insistence on the power of personal responsibility in social change.

Here on the mountain top we are in the sweep of all the winds out of a great emptiness of sky, and the cold seeps through to the very marrow of my bones. But cold, windy weather is hawk weather, and so I am glad, although I shiver and my nose reddens, and I look speculatively at my thermos of hot coffee… Mists are drifting over the valley. A grayness overhangs all the sky and the clouds seem heavy with unshed rain. It is an elemental landscape — a great rockpile atop a mountain, nearby a few trees that have been stripped and twisted by the mountain winds, a vast, pale, arching sky.
But a person of passion and brilliance is never bored for long.

For what to me were dinner and the boulevards of Paris when my mind was filled with the tragedy of beautiful birds, disappearing through the neglect and indifference of those who had at their disposal wealth beyond avarice with which these creatures might be saved?