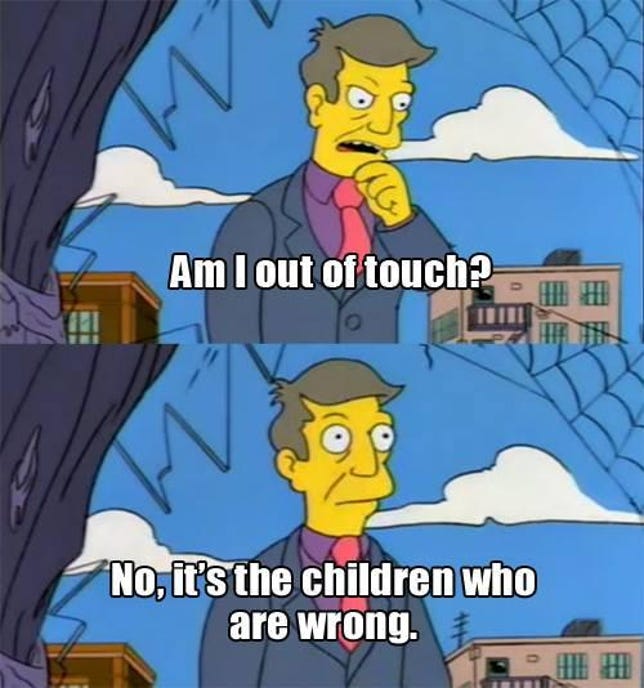 I distinctly remember driving my oldest son and one of his friends to an indoor trampoline center. Unprompted, one kid rolled down my car window, before shouting “MAH NAME JEFF” at random passersby on the street. All the kids folded up in laughter. I was in shock.
How will this evolve? How will this translate when this cursed generation of children have direct, untethered access to the internet via their own mobile phones and laptops? It’s impossible to say. All bets are off. Only one thing’s for sure: We will be left behind. We will be laughed at, ridiculed in group chats or TikToks or whatever ends up being their platform of choice. This is the nature of things.
That’s when it happened. Thirty-five years after the song’s initial release (and 16 years after “Rickrolling” was first popularized online) my house was rocking to the sweet, sweet sounds of Never Gonna Give You Up by Rick Astley. Much like the olden days, where urban legends spread from older sibling to savvy younger brother and beyond, children are constantly proliferating preexisting memes utterly divorced from the context of their origins. They’re consumed by osmosis, via a family member or YouTube streamer, then rapidly co-opted. Quickly they become part of a bizarre shared language. Nonsensical words that are simply shouted on the playground yet make no literal sense. As Principal Skinner once asked: Am I out of touch? Or is it the kids who are wrong?
WASSUUPPPPPPPP.
Whatever the adults are doing now is wrong. Sorry Principal Skinner, that’s just facts. Whatever it is they’re about to do is the only way forward. Might as well get used to it. Might as well jump onboard while there’s still time.But while kids are cut adrift from trends and understanding of what’s new, they exist at the cutting edge. Their meme consumption is a different, almost elevated experience. We merely adopted the meme, they were born in it. Children exist in a different plane dissociated from meaning. They just shout a word or phrase like a warped incantation and have its desired effect impacted upon them like magic. EXPELLIARMUS! It’s almost admirable. Completely without pretense.
“ALEXA…” he said, with the speech patterns of a drunken hell-dwarf. “PLAY RICK ROLL… ON SOUNDTRACK.”

Parenting books won’t help you. Nothing written or published in our present time can prepare you for the hell of parenthood on the cutting edge of technology. They can’t teach you to handle Roblox or Fortnite or the time your son/daughter “accidentally” used your credit card to spend 0 on Minecoins.
Counter to the “kids get too much screen time” narrative, most young children aren’t tethered to online culture like us adults. As a result of screen time limits and intermittent access to online devices, they’re not scrolling through Instagram Stories or mindlessly flipping through TikToks like teenagers.
But kids are taking it to the next level. Now this shit doesn’t even need to make sense.
“DAD. Don’t you even know what a Rickroll is?” I have two boys. A 6-year-old and one age 9. Children this age, for some reason or other, love memes.
This is why my 9-year-old shouts “SUCCULENT CHINESE MEAL” at completely inappropriate times. Why my 6-year-old knows every word of Never Gonna Give You Up and finds it hilarious, despite having no real understanding of why that song had such a massive impact on generations of perennially online folks.
One day I was eating dinner with my kids. We were laughing and joking and I started talking in a silly voice. I can’t remember a single thing I said or even what the voice sounded like, but my kids were losing it so I just kept on going. After a while it got old. The laughter subsided. That’s when my oldest kid stopped and asked me quite seriously. He dropped his orange school bag in an awkward spot where it’s not supposed to be, then walked over to our Alexa Studio, situated next to the family TV, and began garbling.
But not like you or I love memes. No. They don’t consume memes like us, they don’t talk about memes like us. They don’t even think about them in the same way. It’s weird.
My 6-year-old entered the house noisily. He does most things noisily and I love him for it.When it comes to meme consumption, kids are disconnected from time and space. They simply do not give a shit. Old memes, new memes… there’s no distinction between the two. Their world is the playground. Whatever is relevant there is relevant to them as individuals and a collective. That’s it. Nothing else matters. How did this happen? How did this 6-year-old boy become aware of Rick Astley and this song? The reasons were unclear.
So I asked him. Why? Why did he casually walk into our home and ask Alexa to play Never Gonna Give You Up? I guarantee none of these children have watched 22 Jump Street and I also guarantee none of them could pick Channing Tatum from a lineup if their life depended on it. So what happened? My guess: One day a cool kid said “MAH NAME JEFF” in the playground and everyone laughed. So everyone kept saying it. Over and over again. Like a cooked Budweiser commercial.He always asks Alexa to play songs “ON SOUNDTRACK.”

“What meme was that from?”
They especially won’t tell you about memes. But I know one thing: Kids love memes.
MAH NAME JEFF.
In some ways that’s normal. Memes have penetrated our broader culture to the point where you don’t need to understand their history to find them funny. There’s a collective, shared understanding that “this is funny.” Memes evolve. We apply their concepts to new, increasingly complex situations and implicitly just get it. We’re laughing collectively because that’s normal. Somehow it makes us laugh harder.
I was promptly eviscerated.
My 9-year-old will regularly come home and say, “Hey dad, you see this cool new meme?” Then, without a shred of irony, ask me to Google “Double Rainbow.” 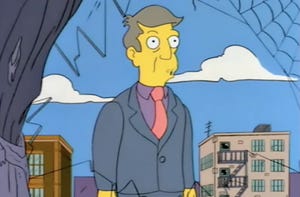