Five years after he first began using the term, Fitz Gerald half-answered.
There were then, as there are now, several primary categories of clickbait. Let us call one of them Big Things.
For a broader diameter of the cultural Venn diagram of New York and apples, savor some poetry, storytelling, and music from the planting ceremony for artist Sam Van Aken’s symphonic living sculpture Tree of 40 Fruit: New York Apples, freely available to any body in any city on Pioneer Works’ culturally lush online journal The Broadcast.
On May 3, 1921, John J. Fitz Gerald — a sports journalist for the New York Morning Telegraph reporting on the horse-racing circuit — suddenly began referring to results from New York City as news from “the big apple.” He soon titled his entire column “Around the Big Apple,” extolling the Big Apple as “the dream of every lad that had ever thrown a leg over a thoroughbred and the goal of all horsemen.” Eventually, people began wondering why he had so nicknamed their city.
Of those, exceptionally big apples were the most popular news item.
Several years earlier, traveling to New Orleans for a race, he had overheard two African American stable hands discussing the horses in their respective care and where they were headed next. One of the young men told the other, in a “bright and snappy” quip, that the horse was going to “the big apple.” Fitz Gerald, knowing that the horse was in fact headed to New York City, seized on the term without asking where it came from — something about it just felt like the right poetic image for the grandeur and lushness of life in his hometown.

By the 1850s, a new term had emerged: “to wager a big apple,” or “to bet a big apple” — which meant to risk your best, the measure of your skill and character, taking a chance on something promising but uncertain.
In the generations since the term was coined, for those of us coming from other countries and cultures, with identities that are in any way other, escaping dictatorships or poverty or violent homes, or simply leaving behind lives too small for our dreams, beginning a new life in New York City has remained a wager of the biggest existential apple.

It is where Kahlil Gibran journeyed to find his voice as a poet, painter, and philosopher, trading his native Lebanon for this strange and wondrous city where one is bound to “gaze with a thousand eyes and listen with a thousand ears all through the day,” the place that a generation later staggered Italo Calvino as “the land of the richness of life, of the fullness of every hour in the day,” the place in which another generation later Zadie Smith located the testing ground of the American dream.
Immersed in the world of apples — apples as botany, apples as poetry, apples as cultural symbology — my historical voracity and scholarly stubbornness grew restless with the unsolved mystery of why the two men in New Orleans had referred to the city that way in the first place. It is a term now familiar the world over, yet opaque even to New Yorkers, most of whom either know nothing about the origin at all or know one of the several circulated origin myths since debunked. The scholar Barry Popik has done most of this debunking, but his considerable work on the history of the moniker focuses more on how the term bloomed into popular culture after Fitz Gerald popularized it. I was interested in the roots, predating Fitz Gerald and predating even the young men from whom he had heard it.
He died without ever saying anything else about it, having seeded into the urban dictionary the single most powerful and recognizable botanical metaphor in popular culture.
After extensive trawling of archival newspapers, out-of-print books, and oral histories, I emerged with a working theory.

With the Industrial Revolution still perfecting its human-made Big Things, news of the biggest bridge yet and the deepest oil well yet and the tallest building yet made regular headlines. But America was still primarily an agricultural nation — such industrial feats so scintillated precisely because they were few and far between, isolated to the major cities. Throughout the vast sweep of farmland that was the rest of the country, farmers could not compete with bridges and buildings. But they could make their own claims to the Big Things category with human-assisted feats of nature, taking especial pride in fruits, vegetables, and animals that grew to staggering size under their care. (The notion of genetics, and therefore of mutation, was still foreign — size was seen less as a chance-stroke of nature than as a metric of farming acumen.) 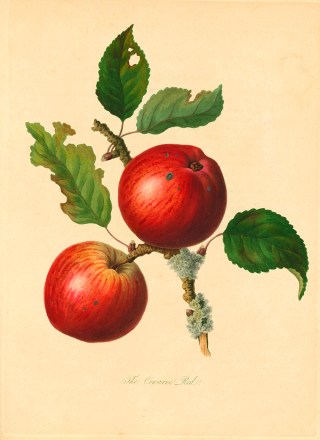 A century after the inception of the term, while curating and hosting an apple-tree planting ceremony at Pioneer Works in Brooklyn, I found myself wondering what the metaphor was actually for.
In an era before Abraham Lincoln wagered his own biggest apple on the Emancipation Proclamation, it was an act of tremendous courage for a black person in the South to travel North in pursuit of their freedom and their basic human rights. To do this, people risked everything they had. Many lost everything they had — including their lives. New York City, with its lively liberal culture and its political umbilical cord to somewhat more egalitarian Europe still uncut, appeared as a particularly fertile garden for personal liberation and self-actualization — not only for fugitive slaves, but for anyone who came from very little and dared dream of very much: immigrants, entrepreneurs, women interested in soaring beyond the domestic sphere, dissenters against dogma and convention along every axis of identity and equality. It is where Frederick Douglass journeyed to being his free life — a life that reshaped his country’s political conscience — and where Margaret Fuller journeyed to lay the foundation of modern feminism.

In the early nineteenth century, as newspapers became the first truly mass medium, they quickly bent under the same market forces that warp today’s online journalism and social media — forces they themselves engineered with the formative model of trading an audience for advertising revenue, with attention as the currency. Tempted to grow their audience, newspapers increasingly sacrificed substance and integrity at the altar of scale, inventing what we now call “clickbait” — sensational titles designed to grab the reader’s most primal attention, hovering over mediocre stories of moderate entertainment value and no lasting intellectual or emotional reward.