One major aspect of this extended mind is our capacity for interoception — an awareness of the internal sensations of the body that gives us a kind of non-conscious knowledge, which we might term intuition but which is rooted in concrete embodied experience and somatic pattern-recognition. We might not detect the signals consciously, but we respond to the information they carry.
It is a curios notion, referring to ourselves — and our selves — as “inhabitants” of our bodies. I am reminded of Whitman (then again, I am frequently reminded of Whitman):
Thinking outside the brain means skillfully engaging entities external to our heads — the feelings and movements of our bodies, the physical spaces in which we learn and work, and the minds of the other people around us — drawing them into our own mental processes. By reaching beyond the brain to recruit these “extra-neural” resources, we are able to focus more intently, comprehend more deeply, and create more imaginatively — to entertain ideas that would be literally unthinkable by the brain alone.
Even our metaphors for the mind have taken us further and further from our essential nature as creatures shaped by our environment and our interactions with other creatures, dishonoring Rachel Carson’s science-rooted poetic insight that “there is in us a deeply seated response to the natural universe, which is part of our humanity.” We left Plato’s cave of consciousness and, corralled by Descartes and the Industrial Revolution, reduced the mind to the brain, then reduced the brain to a machine, explaining its workings by drawing analogies to the technology of the hour: The brain was a loom, the brain was a telegraph, the brain was a computer.

Reflecting on this mesh model of the mind — which mirrors what we have been learning about how trees “think” and “feel” over the past half century — Paul adds:

“Our minds are all threaded together,” the young Virginia Woolf wrote in her diary at the dawn of the twentieth century, “and all the world is mind.” Meanwhile in Spain, the middle-aged Santiago Ramón y Cajal was birthing a new science that would both greatly expand our knowledge of the brain and greatly contract our understanding of the mind. Over the following half-century, in its noble effort to render comprehensible what William James so poetically termed the “blooming and buzzing confusion” of consciousness, neuroscience would become both a great leap forward and a great leap back. Again and again, its illuminating but incomplete findings would be aggrandized and oversimplified into a sort of neo-phrenology that incarcerates some of our most expansive human experiences and capacities — love and grief, intelligence and imagination — in particular brain regions with particular neural firing patterns.

In what remains one of the most inspired metaphors in the history of science, Paul renders the mind as a magpie — that evolutionary cousin of the crows and ravens, known for its uncommon intelligence and its ability to make messy yet elaborate nests out of whatever its environment has to offer.

We extend beyond our limits, not by revving our brains like a machine or bulking them up like a muscle — but by strewing our world with rich materials, and by weaving them into our thoughts.
Paul distills this recalibration of understanding:

When a potentially relevant pattern is detected, it’s our interoceptive faculty that tips us off: with a shiver or a sigh, a quickening of the breath or a tensing of the muscles. The body is rung like a bell to alert us to this useful and otherwise inaccessible information. Though we typically think of the brain as telling the body what to do, just as much does the body guide the brain with an array of subtle nudges and prods. (One psychologist has called this guide our “somatic rudder.”) Researchers have even captured the body in mid-nudge, as it alerts its inhabitant to the appearance of a pattern that she may not have known she was looking for.

And Whitman again, contemplating “the fathomless human brain” to go on asking:

In The Extended Mind: The Power of Thinking Outside the Brain (public library), Annie Murphy Paul explores the most thrilling frontiers of this growing understanding, fusing a century of scientific studies with millennia of first-hand experience from the lives and letters of great artists, scientists, inventors, and entrepreneurs. Challenging our cultural inheritance of thinking that thinking takes place only inside the brain, she illuminates the myriad ways in which we “use the world to think” — from the sensemaking language of gestures that we acquire as babies long before we can speak concepts to the singular fuel that time in nature provides for the brain’s most powerful associative network. 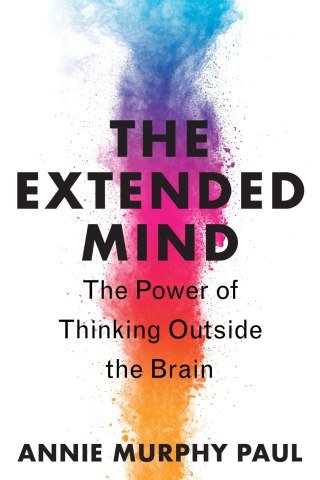 Considering how profoundly this analogy reframes our understanding of mental processes, she writes:
“And what is reason? and what is love? and what is life?”
“And if the body were not the soul, what is the soul?”

Thought happens not only inside the skull but out in the world, too; it’s an act of continuous assembly and reassembly that draws on resources external to the brain. For another: the kinds of materials available to “think with” affect the nature and quality of the thought that can be produced. And last: the capacity to think well — that is, to be intelligent — is not a fixed property of the individual but rather a shifting state that is dependent on access to extra-neural resources and the knowledge of how to use them.