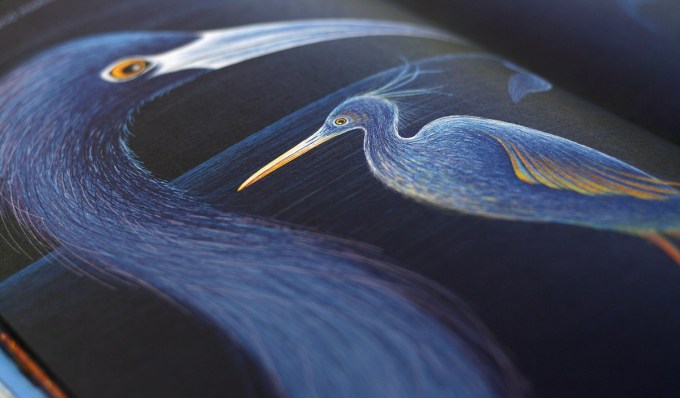 The day ends.
The night falls.
And in between…
there is the blue hour.
But despite Earth’s distinction as the Solar System’s “Pale Blue Dot,” this planetary blueness is only a perceptual phenomenon arising from how our particular atmosphere, with its particular chemistry, absorbs and reflects light. Everything we behold — a ball, a bird, a planet — is the color we perceive it to be because of its insentient stubbornness toward the spectrum, because these are the wavelengths of light it refuses to absorb and instead reflects back. 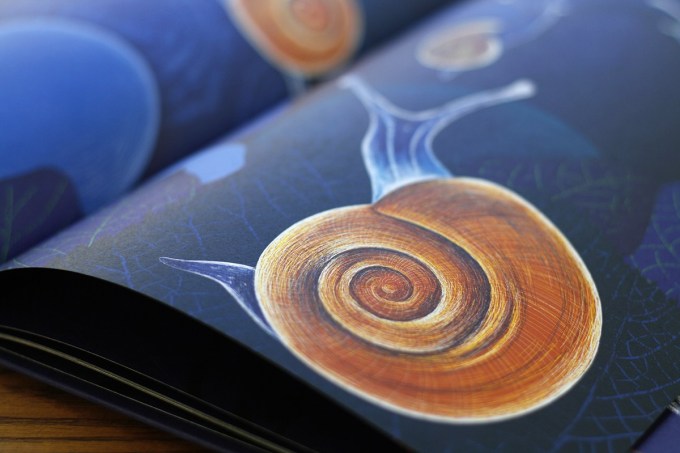 The book opens with a palette of blues strewn across the endpapers — from the delicate “porcelain blue” to the boldly iconic “Klein blue” to the brooding “midnight blue” — hues that come alive in Simler’s vibrant, consummately cross-hatched illustrations of creatures and landscapes, named in spare, lyrical words. What emerges is part minimalist encyclopedia, part cinematic lullaby.
In the living world beneath our red-ravenous atmosphere, blue is the rarest color: There is no naturally occurring true blue pigment in nature. In consequence, only a slender portion of plants bloom in blue and an even more negligible number of animals are bedecked with it, all having to perform various tricks with chemistry and the physics of light, some having evolved astonishing triumphs of structural geometry to render themselves blue: Each feather of the bluejay is tessellated with tiny light-reflecting beads arranged to cancel out every wavelength of light except the blue; the wings of the blue morpho butterflies — which Nabokov, in his spree of making major contributions to lepidoptery while revolutionizing literature, rightly described as “shimmering light-blue mirrors” — are covered with miniature scales ridged at the precise angle to bend light in such a way that only the blue portion of the spectrum is reflected to the eye of the beholder. Only a handful of known animals, all species of butterfly, produce pigments as close to blue as nature can get — green-tinted aquamarines the color of Uranus. 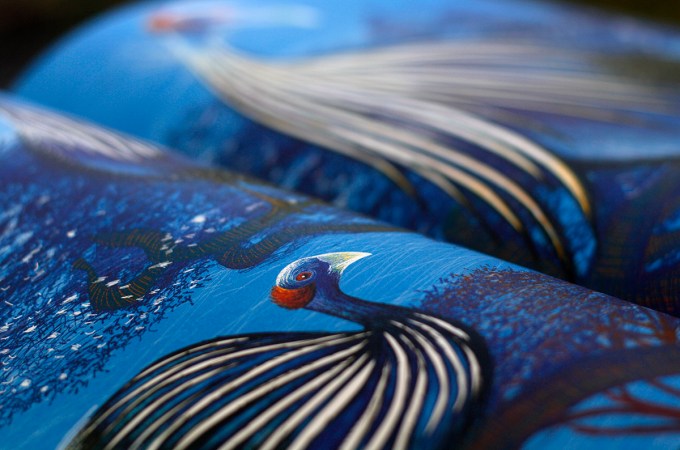 Illustrations by Isabelle Simler; photographs by Maria Popova
We meet the famed blue morpho butterfly spreading its wings against the blue morning glory, the Arctic fox traversing the icy expanse in its blue-tinted coat, the blue poison dart frogs croaking at each other across the South American forest, the silvery-blue sardines glimmering beneath the surface of the blue ocean, the blue racer snake coiled around a branch, the various blue birds silent or singing in the gloaming hour. 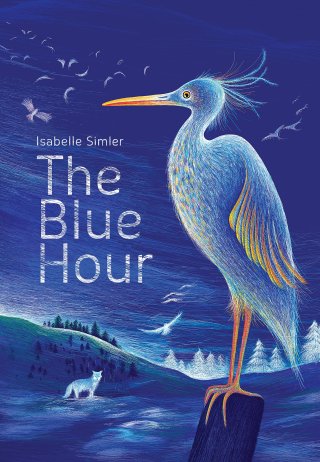 Given my uncommon love of snails, I was especially pleased to find the glass snail gracing this menagerie of blue-tinted living wonders. 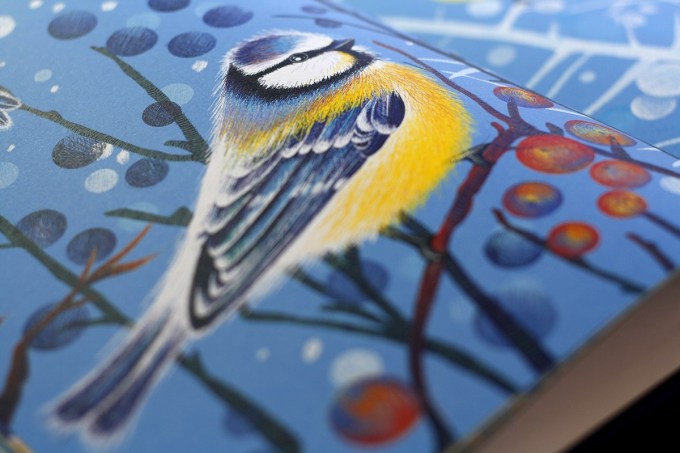 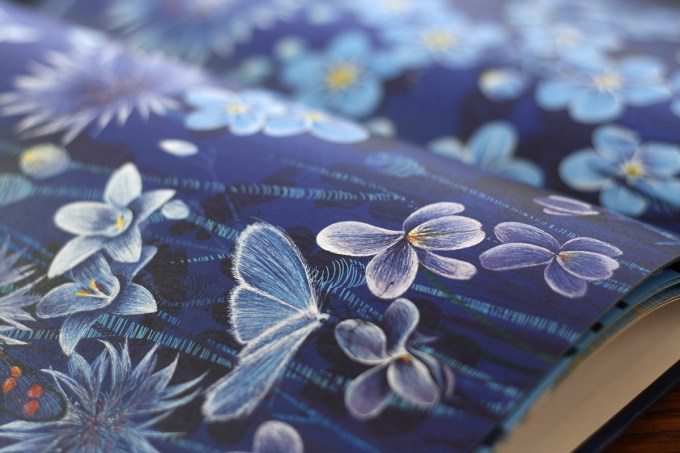 In the final pages, as the black of night drains the blue hour from the day, all the creatures grow silent and motionless, the hint of their presence consecrating the apparition of this blue world.
Blue, Rebecca Solnit wrote in one of humanity’s most beautiful reflections on our planet’s primary hue, is “the color of solitude and of desire, the color of there seen from here… the color of longing for the distances you never arrive in, for the blue world,” a world of many blues — a pioneering 19th-century nomenclature of colors listed eleven kinds of blue, in hues as varied as the color of the flax-flower and the throat of the blue titmouse and the stamina of a certain species of anemone. Darwin took this guide with him on The Beagle in order to better describe what he saw. We name in order to see better and apprehend only what we know how to name, how to think about. 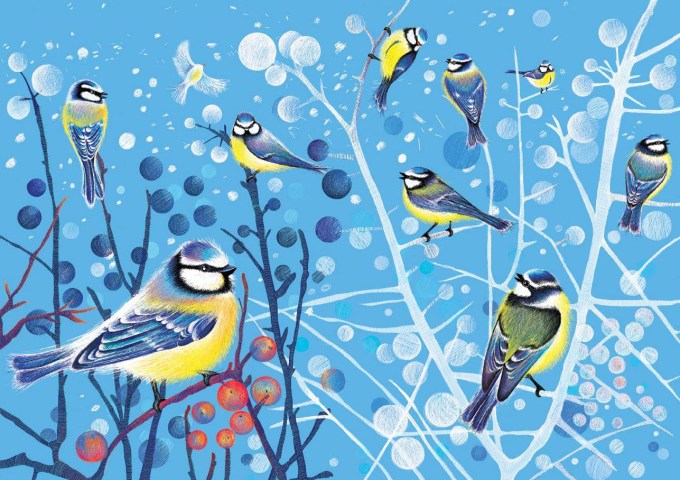 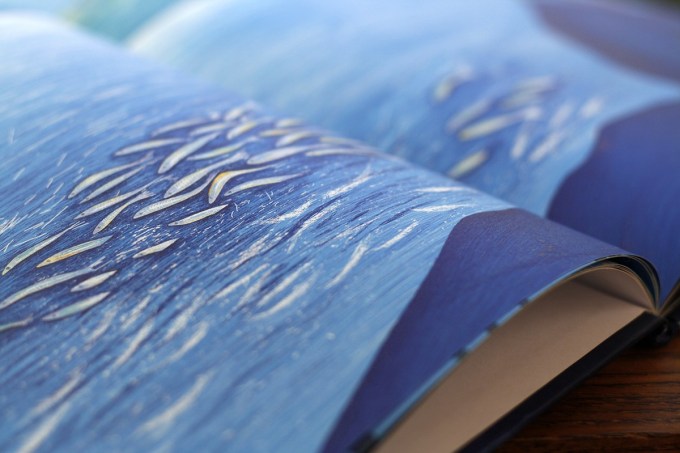 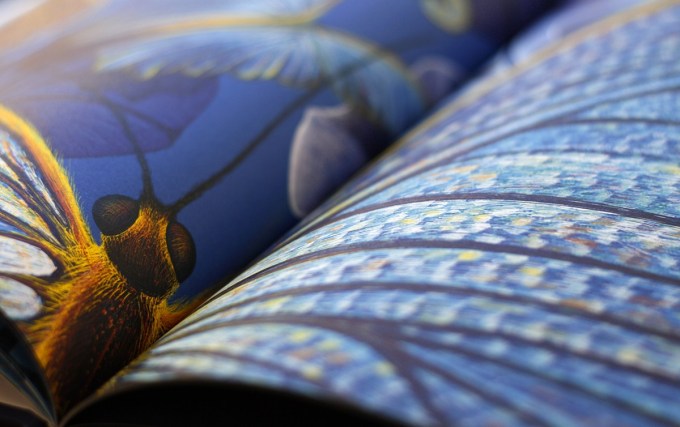 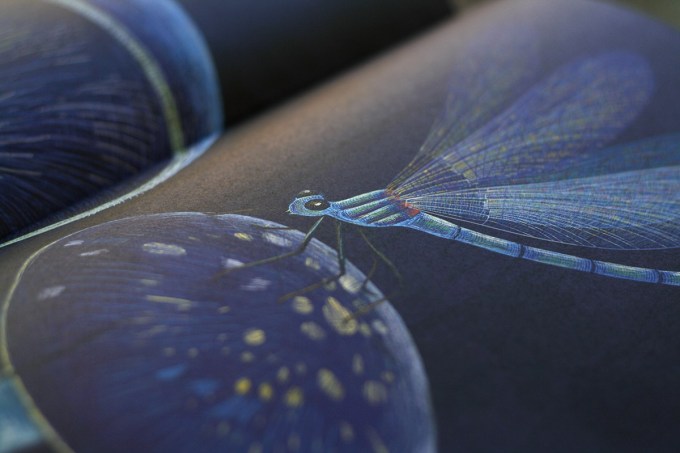 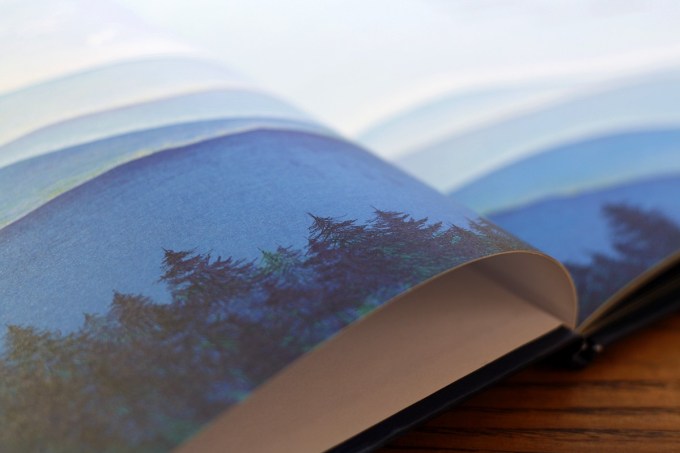 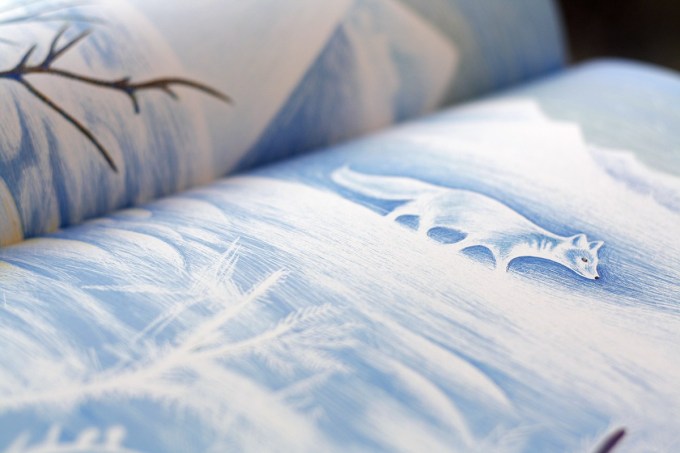 In The Blue Hour (public library), French illustrator and author Isabelle Simler offers a stunning joint celebration of these uncommon blue creatures and the common blue world they inhabit, the Pale Blue Dot we share. 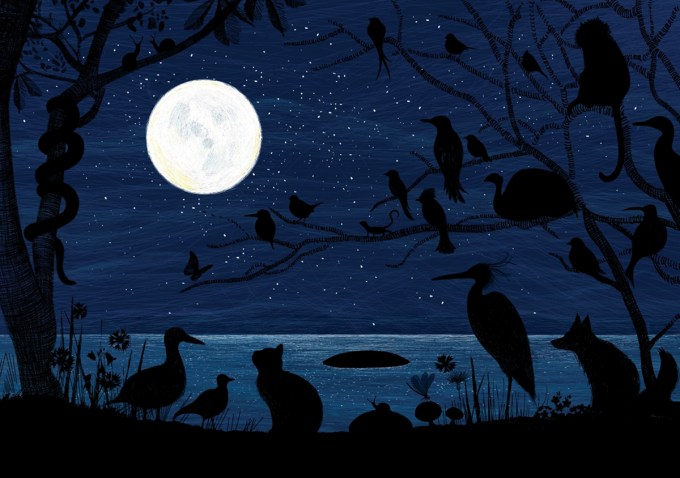 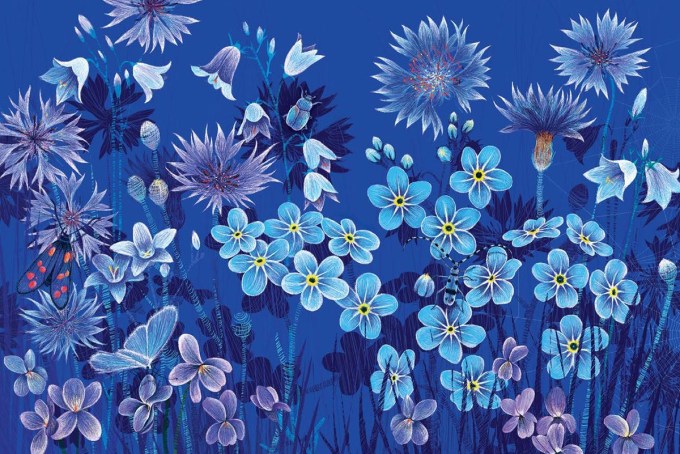 Couple The Blue Hour — a large-scale splendor of paper and ink untranslatable to this small blue-reflecting screen — with Maggie Nelson’s love letter to blue, then find a kindred painted celebration of the natural world in The Lost Spells. 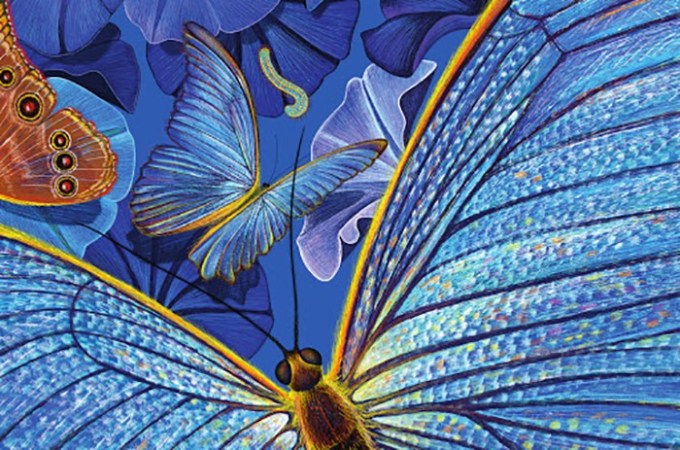 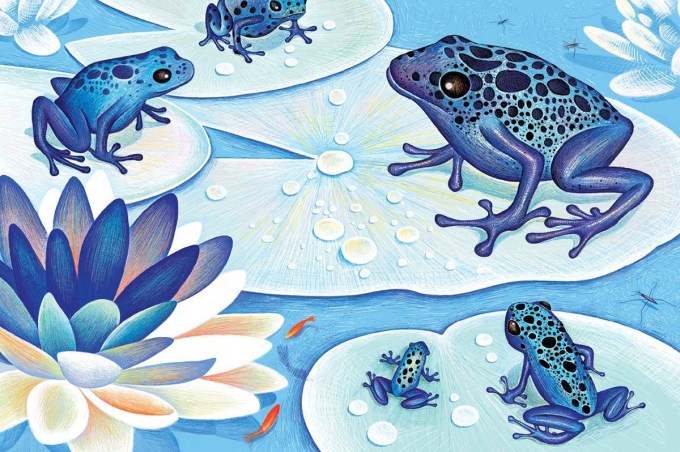 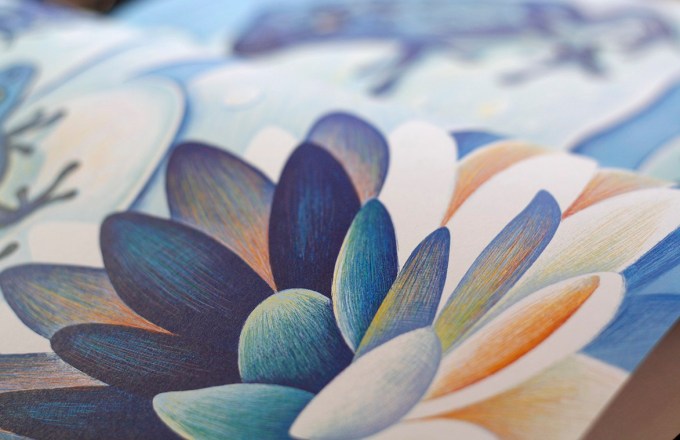