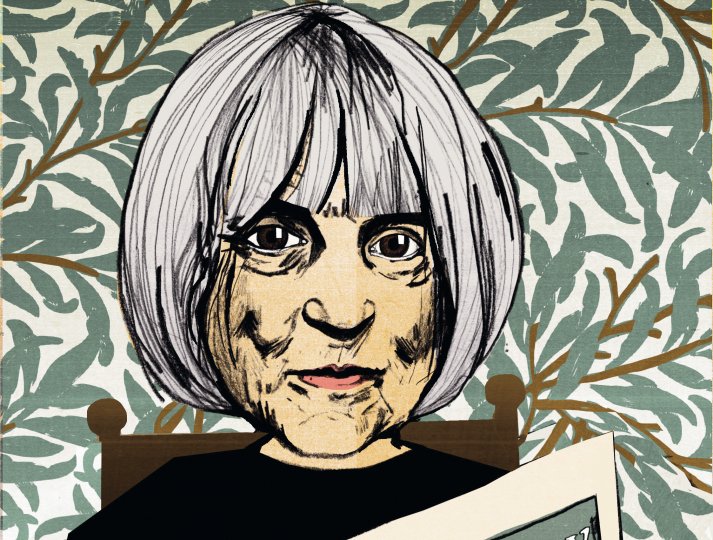 But perhaps that is the source of the myth: in a business dominated by men, Wilmers was, in her Bloomsbury redoubt, a quiet salonnière for a fading journalistic sensibility. “I like difficult women,” she said, “not just for the obvious reason that I’m a bit difficult myself…and I like their complication.” Just like Rhys, she describes herself beautifully.
A mythology has grown around Wilmers. In 2019 the New York Times called her “Britain’s most influential editor”, a suspect claim in a country shaped by that unholy trinity of Paul Dacre, Andrew Neil and Boris Johnson.
Wilmer’s predecessor was Karl Miller, who founded the LRB in 1979. A former New Statesman literary editor, Miller was an urbane presence on the London literary scene, an editor committed to the 19th-century traditions of essay writing and journalism that were exemplified by critics such as Francis Jeffrey and the contributors to Edinburgh Review. Wilmers not only shared Miller’s sensibilities, she was an even greater advocate for them, both as editor of the LRB and, through its pages, as a decisive influence on British letters. She was also far more worldly and metropolitan than Miller – her family is extraordinarily wealthy. This was down to biography as much as temperament.
If Wilmers’s backstory – itinerant, literary and eccentric – contrasted with Miller’s – provincial, academic and conventional – so did her choice of writers. Miller was forged in the academy, and it was from there that he drew his favourite contributors: Christopher Ricks, Eric Hobsbawm and William Empson.
The casualness and intimacy of this writing also helped to distinguish the more trenchant commentaries that Wilmers published, such as Mary Beard’s response to 9/11 (“The United States had it coming”), or Pankaj Mishra’s denunciation of the right-wing historian Niall Ferguson in 2011.
The LRB became more political, too. It has always stood to the left of the TLS or its American mother title, the New York Review of Books, and its tone has become more radical, even partisan, over the past two decades. Wilmers once spiked an essay by David Marquand in which he praised Tony Blair’s “impeccable” handling of the 9/11 crisis. Christopher Hitchens was dropped after his neoconservative turn in the 2000s. But as the historian and LRB contributor Perry Anderson has written, it would be wrong “to take instinct for a system”. Wilmers’s stable of writers ranged from Tariq Ali (on the left) to Ferdinand Mount (on the right), and the paper has arguably taken a keener interest in conservatism than left-wing traditions – by 2013, Margaret Thatcher was the third most written about person in its archive, after Shakespeare and Freud.
“She was a narcissist who described herself beautifully.” The description of the mid 20th-century novelist Jean Rhys doesn’t apply to the author who wrote it, even if, in style and sentiment, it epitomises the publication in which it appeared – sly, aphoristic and unapologetically imperious.
Mary-Kay Wilmers was born in Chicago in 1938. Her mother was the daughter of Belorussian Jewish fur traders and her father the son of German Jews. In her family memoir The Eitingons (2009), Wilmers chronicles the near-mythical sagas of those relations on her mother’s side – one, a colleague of Sigmund Freud’s; the other, a Soviet agent who organised the assassination of Leon Trotsky in 1940.
In 1967 Miller had left the New Statesman because the then editor Paul Johnson opposed his use of academic reviewers. When Miller left the LRB in 1992, it also marked the end of the publication’s more scholarly register. From 1992, when Wilmers took over, the LRB became more conversational in tone and published more first-person pieces. The style of journalism was defined by its ur-writers: the literary reportage of Andrew O’Hagan, the mordant candour of the late Jenny Diski, and the jaunty cerebralism of John Lanchester.
Mary-Kay Wilmers published her first piece for the London Review of Books in 1981, two years after joining the “paper” as an editor and 11 years before she became the editor-in-chief. (She is also the owner.) Since then, the LRB, which has a circulation of around 80,000 according to the Audit Bureau of Circulations, but relies on financial support from the Wilmers family trust, has become, in its own self-description, “the pre-eminent exponent of the intellectual essay, admired around the world for its fearlessness, its range and its elegance”. On 29 January Wilmers, 82, stepped down after nearly 30 years as editor. She will be succeeded by deputy editor Jean McNicol and senior editor Alice Spawls.
After a childhood split between the US and Europe, Wilmers arrived at Oxford University in 1957, where she studied modern languages. She also befriended Alan Bennett, who later wrote of her: “I had never come across anyone who behaved so confidently or in such a cosmopolitan fashion.” When ambitions to be a UN translator came to nothing, she took a job at Faber & Faber, where she worked for the poet-publisher TS Eliot. In 1979, after stints at the Listener and then the Times Literary Supplement, she joined Miller at the LRB.