One of this Boat Tail’s individual features is the color. The client’s favorite color is blue, and the specific name of the hue is the couple’s last name, so the company is just calling it “Blue” to protect their anonymity. In a first for a production Rolls-Royce, the Boat Tail’s hood has a gradient effect, with the leading edge of the hood having a dark blue finish that fades into the rest of the body’s hue as it reaches the windshield. Rolls-Royce says the gradient on the hood was hand-painted, with the panel pinned on the wall like an easel and sprayed in a single pass. This is so the bodywork wouldn’t have a perfect finish, as the client didn’t like the look of the fully perfected final versions when presented with early paint samples. The design of the 21-inch wheels is also specific to this car, and they’re finished in the dark blue with matching light blue inserts, accented by the pinstriped tires.
Compared with Rolls’ current production cars, the Boat Tail’s face looks unique. The Pantheon grille is an integral part of the front end instead of looking more tacked-on; there’s no chrome surround, just chrome slats inset in the recessed opening. The top of the grille is a smooth curve that flows into the hood, and the latter has a subtle crease down the center and minimal lines otherwise.
A long chrome strip runs across the front end, topping the grille and the higher-up slim set of LED headlamps. Underneath those lights are a round, recessed lamp on each end, a throwback to the previous-gen Phantom. These lights were desired by the customers, and they give the front a more classic look. The front end is otherwise unadorned, save for a horizontal grille opening and some character lines that surround the headlights. The rear end has a similar full-width chrome strip above superslim horizontal LED taillights that integrates the Rolls-Royce badge.

The company also isn’t ready to share when the other two Boat Tails will come out, but both models will be detailed as well as this first one has been once they’re ready. As for other coachbuilt projects? With the launch of the new division, we’re certain to start seeing more incredible one-off creations in the near future. The next ones are already in the works, in fact. We can’t wait to see them.
Most of the dash is covered in Caleidolegno wood to match the deck, and veneers can be found on the center console, transmission tunnel, floor and other parts of the interior. The couple also owns a classic 1932 Rolls-Royce Boat Tail that the wife wanted restored alongside the build of the modern car. Illustrations of both are found on stainless-steel caps at the ends of each armrest, something you have to notice and pass by whenever you enter or exit. Innes describes being inside the car as being like sitting in the hull of a boat. Aside from the wristwatch and despite using some old components, the Boat Tail’s interior still looks awesome thanks to a number of additional special touches. The cabin’s two-tone blue color scheme matches the exterior paint, with the front seats a dark blue and the rear a light blue. There’s bright blue contrast stitching and piping, the leather has a metallic sheen to it and the lower carbon-fiber parts in the interior have a bright blue weave at 55 degrees to echo the waves of a boat’s wake.
Curiously, the Boat Tail seems to completely share its dashboard, center console, steering wheel, seats and door panels with the old Phantom Drophead convertible, not the new-gen Phantom with which the Boat Tail shares its modular platform. In fact, it seems like the only major styling differences are the deck and surround for the rear seats.
While the Sweptail was constrained by the old Phantom‘s platform, which has roots back in the 20th century, the Boat Tail is based on Rolls-Royce’s own Architecture of Luxury, a modular platform that underpins the current Phantom, Cullinan and Ghost, and crucially doesn’t share anything with BMW. This means that Rolls-Royce’s designers can create basically anything they want without any engineering compromises, and the AoL platform is designed to support full electrification in the future. Rolls-Royce isn’t talking full specs yet, but we know this model shares the same twin-turbo V12 as the rest of the Rolls lineup. There’s no word as to whether it has rear-wheel steering or all-wheel drive, both of which the AoL platform can provide.

As I mentioned earlier, the unveiling of the Sweptail spurred many customers to approach Rolls-Royce wanting a coachbuilt car, but three specific clients — all couples or families — shared a love of J-class racing yachts and nautical design. Rolls’ designers have always wanted to create a modern Boat Tail, especially as the brand has a long history with that body style, so the three customers were presented with the idea and Rolls says they all immediately approved. Their only request to the designers? “Show me something that I have never seen before.”
Rolls-Royce won’t say anything about how much money the Boat Tail costs. At the time the Sweptail was first shown, it was the most expensive new car of all time with an alleged price of just under million, an amount that was surpassed in 2019 by the .7M Bugatti La Voiture Noire. With development costs of the Boat Tail split across three cars that should keep the price down a little — my best guess is that each one is setting back the owners around million. Are you a billionaire, and you’re looking at these photos wondering if you can order a Boat Tail for yourself? Don’t bother calling your dealer representative, because you can’t. Rolls-Royce says that the car is “not a product offering.”

There’s a cocktail table on each side that’s finished in matching wood and rotates in a way that mimics “the offering of an attendant,” and a pair of folding stools made from leather and carbon-fiber stows below them. Once the two panels are open, a parasol(!) hidden in the center of the rear deck can be deployed. Designed by Rolls-Royce from the ground up, the parasol features carbon-fiber stays and a polished aluminum telescoping assembly. The whole thing opens in a flowering, inverted motion so you can be standing right up against the car and not get in the way. 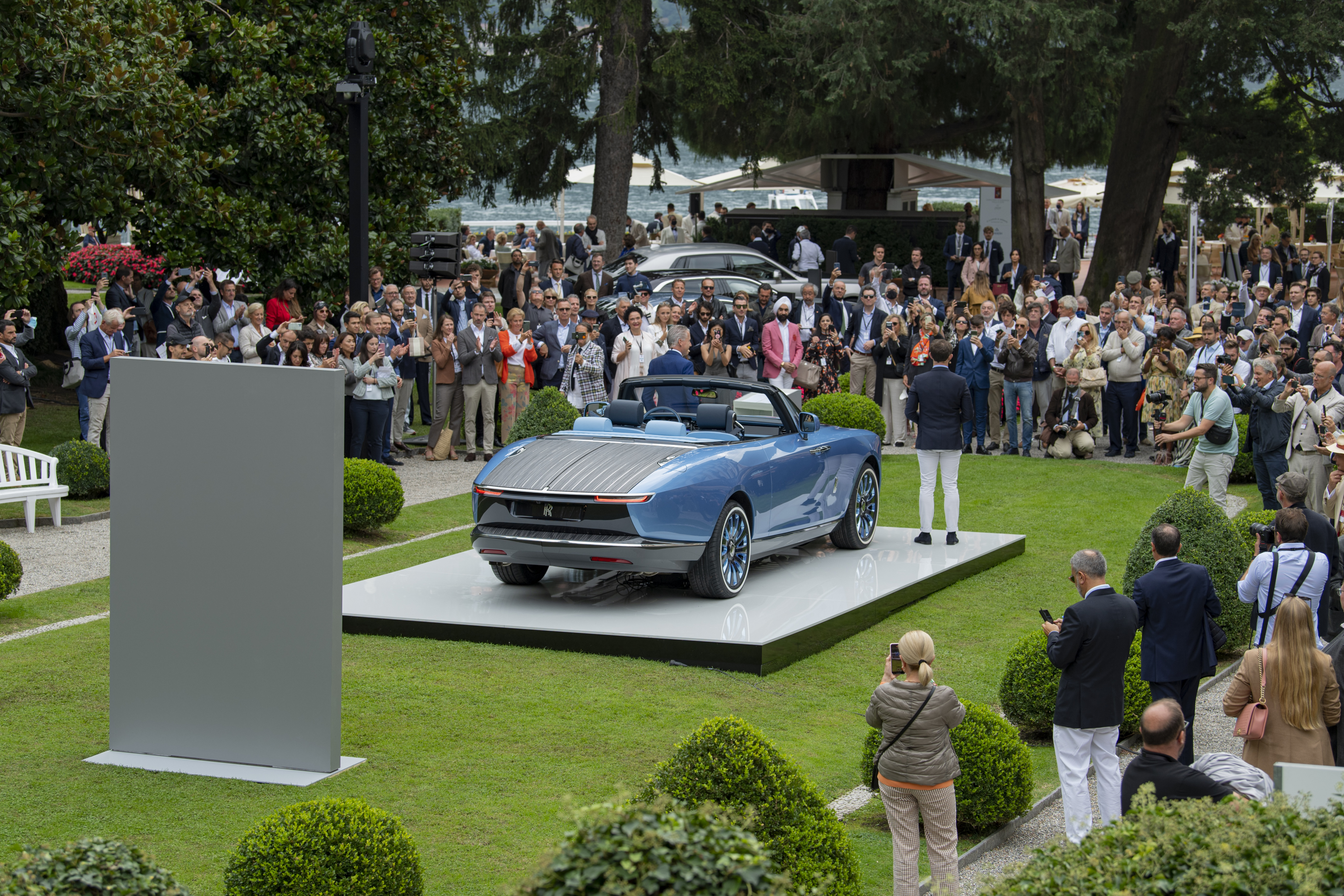 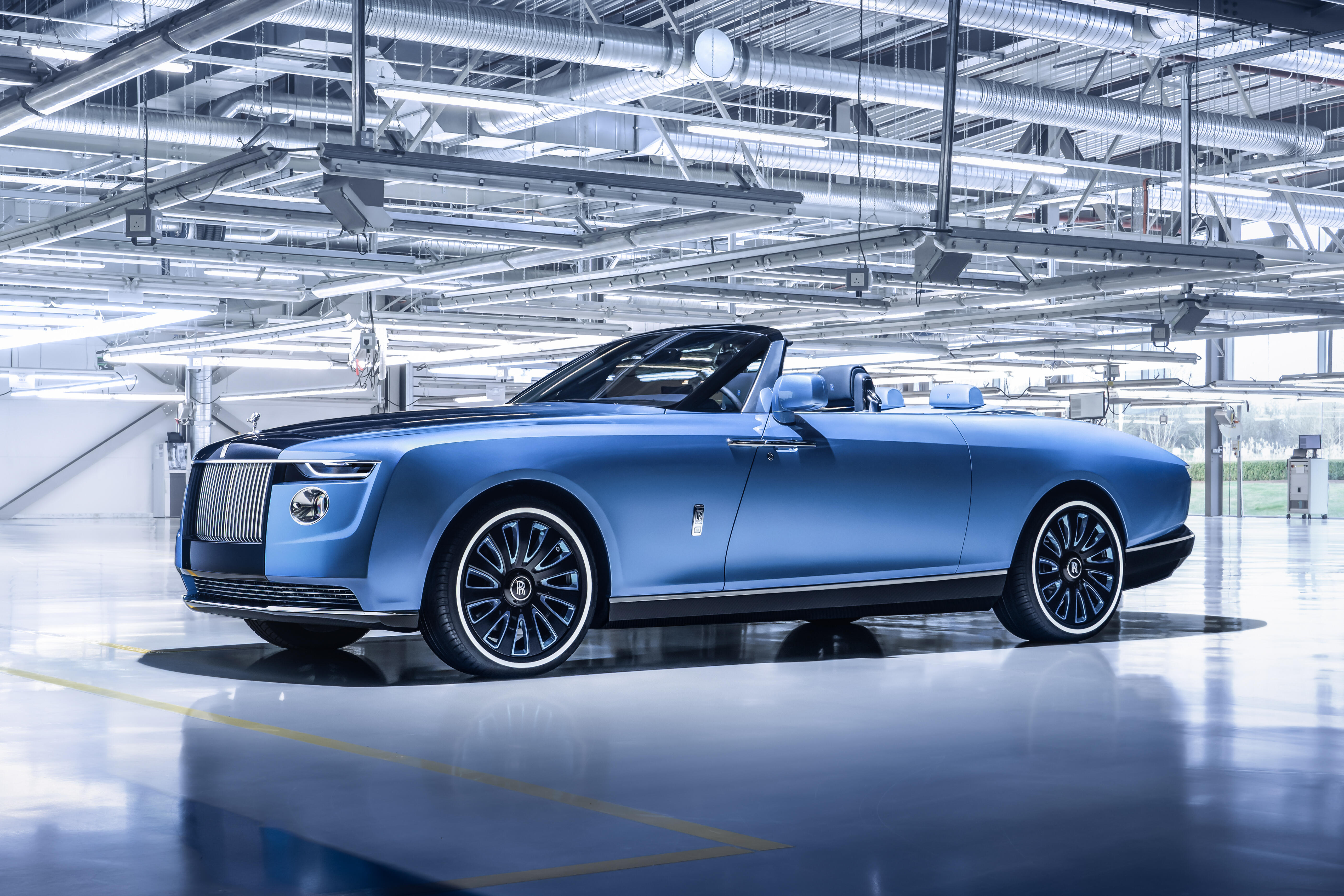 Back in 2017, Rolls-Royce unveiled the Sweptail, an incredibly huge Phantom-based one-off coupe with a completely custom coachbuilt body, the first of its kind from Rolls in the modern era. Right after the Sweptail was revealed, Rolls-Royce had a number of clients asking for custom vehicles of their own, leading the company to create a full-on coachbuilding division of the brand. Three particular customers had very similar visions of what they wanted, and after four years of development, the new Boat Tail was born.
Three Boat Tails will be built, one for each of said customers, and each one will have its own unique styling elements, color and trim specs and special features. So far, only one car has been built — the blue one you see here — and Rolls-Royce isn’t ready to talk about the other two yet. That’s fine, because this first one is absolutely spectacular.
With the panels open, two chests present themselves at a 15-degree angle. On the right side is a full set of dishes and silverware, and on the left are a double refrigerator, a set of Champagne glasses, napkins and other essentials for enjoying bubbly. The owners are Champagne enthusiasts — relatable — so the Boat Tail comes with their favorite vintage of Armand de Brignac. Naturally, the bottles are custom-fitted to the hosting suite’s housings and are polished and finished in matching blue tones. The fridge is even set to the optimum serving temperature of this specific Champagne. Everything found in the suite is custom-made and engraved, and Rolls-Royce says there are no spares. If anything gets broken, Rolls will have to make new ones.

Innes is proud of the fact that all three Boat Tails have been commissioned by people who promise to genuinely, regularly drive and use their cars — hence the hosting suite in this one — and all three customers want to drive the car as soon as they take delivery. These original coachbuilt wonders aren’t just going to be hidden away in a garage, never to be seen. To that end, the Boat Tail is fully homologated and road-legal, having gone through the same dynamic testing regimen as any regular production Rolls. The owner will even be able to have the vehicle serviced at regular Rolls-Royce dealerships. As with the stuff in the hosting suite, though, Rolls has no spare parts.

The 15-speaker bespoke audio system in all of Rolls’ production cars uses a section of the sill as the resonance chambers for the bass speakers, but in the Boat Tail, the whole of the floor structure is used. Five new ECUs were created just for the rear end of the car to make sure the hosting suite was possible, which also required a dedicated wiring harness that took nine months of development. The hosting suite has its own climate-control system in the compartments to preserve food, and two fans are mounted in the lower section in case of hot weather — Rolls even says the hosting suite was tested between 176 degrees and -4 degrees Fahrenheit to make sure the system could work in all climates.
The three clients don’t know each other, nor did they get in contact during the design and creation process. To retain the coachbuilt feel despite the models being part of a small series, the customers agreed that the cars could share the same basic body. These clients weren’t allowed to participate in the actual design process but they were involved the creative process and obviously guided the direction of each of their cars. In fact, Rolls’ design team traveled to each of their houses to learn more about these owners’ lives, personalities and desired use for their cars.
While Rolls-Royce says its customers didn’t specifically ask for a roof — and the Boat Tail was designed without one in mind — the company has also developed a fixed roof for the car. The top features a glass rear window and two upright posts made from carbon fiber, while the main top section is fabric and has extensions that clamp onto the deck and give it a flying buttress look. This roof requires multiple people to attach and remove, but the car also comes with a tonneau cover in case of emergencies or when the car will be left parked outside without access to the roof. 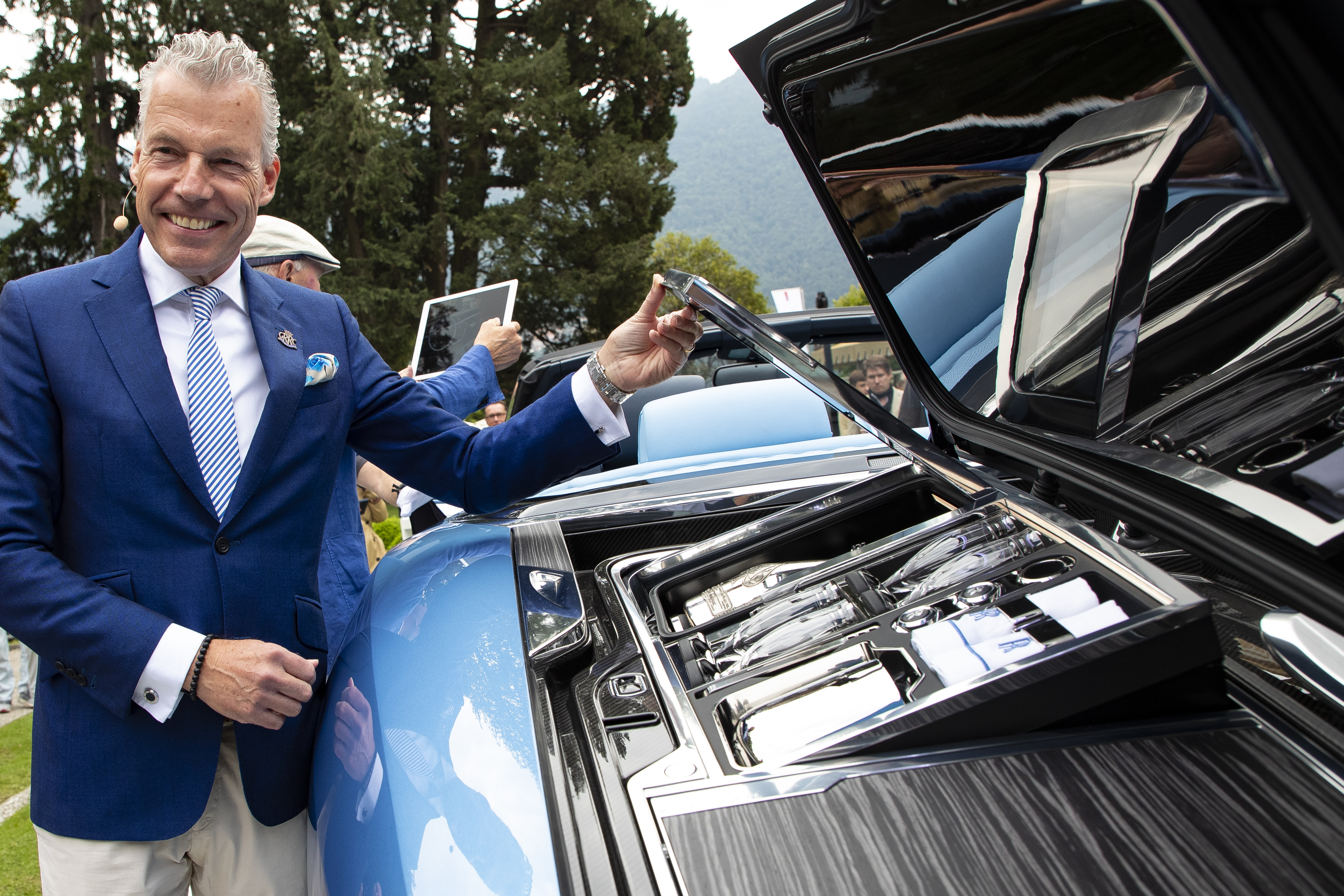 I especially love the windshield, which appears to have fully wraparound glass that ends at the slightly swept-back chrome A-pillars. But really it’s three pieces of glass, with small quarter windows that are glazed over additional upright pillars. The Boat Tail has regular retractable side windows as well as a set of smaller quarter windows.
Gudrun Muschalla/Hardy Mutschler/BMW Group 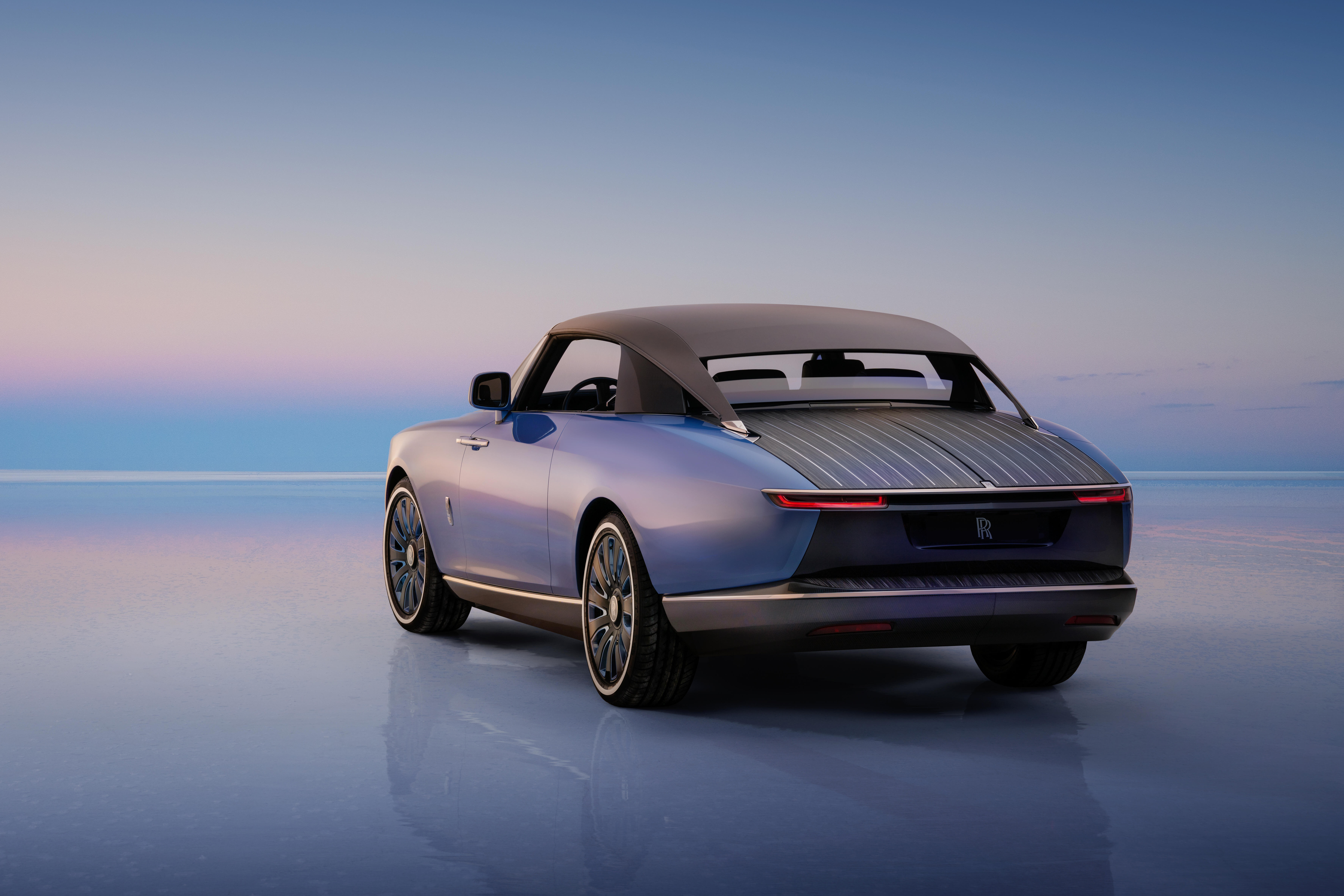 The new Phantom has a fixed clock in the top of the dashboard, next to the infotainment screen, but the old Phantom had a screen that could be hidden by a rotating panel that contained a dashboard clock. While we don’t have all the details yet — expect a story specifically on this Boat Tail’s watch in the coming weeks — the timepiece is housed in that panel. The car also has analog gauges that mimic the watch’s face, instead of digital gauges like the newer production cars. 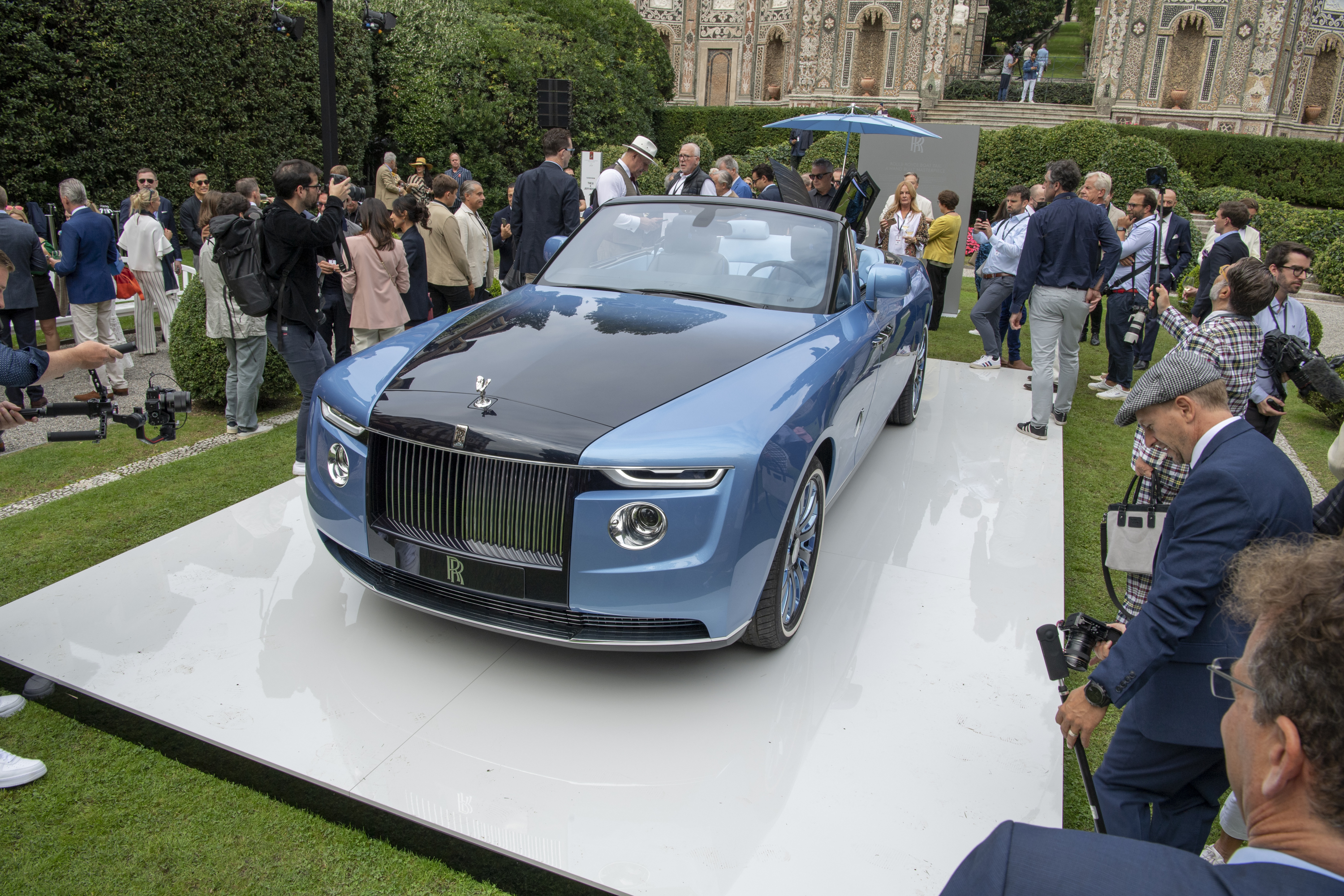 The other two Boat Tails will have different styling and features. 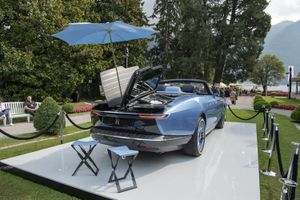