To go beyond our normal identities and become closer than close is to lose our sense of self in temporary joy, a form of arrival that only opens us to deeper forms of intimacy that blur our fixed, controlling, surface identity.
CLOSE
It salved me profoundly, this meditative visual poem — part David Byrne, part Bill T. Jones, and part Buddha — radiating Hermann Hesse’s century-old wisdom that “whoever has learned how to listen to trees no longer wants to be a tree [but] wants to be nothing except what he is.”
When I am sad, I like to imagine myself becoming a tree. Branches that bend without breaking, fractal with possibility, reaching resolutely toward the light. Roots touching the web of belonging beneath the surface of the world, that majestic mycelial network succoring and nurturing and connecting tree to tree — connection so effortless, so imperturbable, so free from the fragility of human relationships.
After writing about wintering trees as supreme teachers in resilience, I received a lovely note from a reader in England — theater artist, movement director, and Hatha Yoga teacher Andrew Dawson, a former student of Merce Cunningham’s. He shared a kindred-spirited film he had made, in his words, “for those who are reaching for something more but can’t quite grasp it, for those on their journey, not yet at their destination.”

Human beings do not find their essence through fulfillment or eventual arrival but by staying close to the way they like to travel, to the way they hold the conversation between the ground on which they stand and the horizon to which they go. What makes the rainbow beautiful, is not the pot of gold at its end, but the arc of its journey between here and there, between now and then, between where we are now and where we want to go, illustrated above our unconscious heads in primary colour.

[embedded content]
is what we almost always are: close to happiness, close to another, close to leaving, close to tears, close to God, close to losing faith, close to being done, close to saying something, or close to success, and even, with the greatest sense of satisfaction, close to giving the whole thing up.

We live by unconsciously measuring the inverse distances of our proximity. 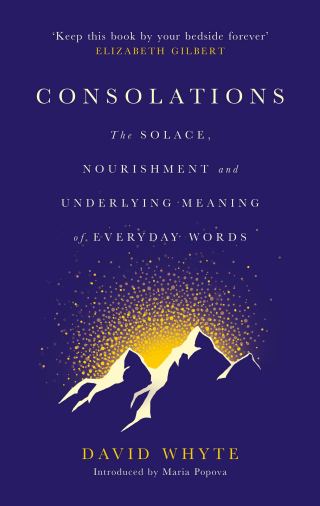 Our human essence lies not in arrival, but in being almost there, we are creatures who are on the way, our journey a series of impending anticipated arrivals. We live by unconsciously measuring the inverse distances of our proximity: an intimacy calibrated by the vulnerability we feel in giving up our sense of separation.
Complement Dawson’s poetic short film with Dylan Thomas’s cinematic poem about how trees illuminate the wonder of our humanity and Robert Macfarlane’s reflection on how trees embody the secret to healthy relationships, then revisit Whyte’s lyrical rerooting of the meanings of courage, vulnerability, forgiveness, and love.
Commissioned by the London International Mime Festival, filmed by Dawson’s son, Roman Sheppard Dawson, and featuring music by composer Jonny Pilcher, the film was inspired by a line from a short lyrical essay titled “Close” from poet and philosopher David Whyte’s superb collection Consolations: The Solace, Nourishment and Underlying Meaning of Everyday Words (public library) — a book of lyrical reanimations of language that touched me deeply when I first read it several years ago (and for the recent English edition of which I had the honor and joy of composing the introduction).
Here is Whyte’s original mycelium of inspiration for Dawson’s Proximity:
We are in effect, always, close; always close to the ultimate secret: that we are more real in our simple wish to find a way than any destination we could reach: the step between not understanding that and understanding that, is as close as we get to happiness.

To consciously become close is a courageous form of unilateral disarmament, a chancing of our arm and our love, a willingness to hazard our affections and an unconscious declaration that we might be equal to the inevitable loss that the vulnerability of being close will bring.