What if the submarine
is praying for a way
it can poison the air,
in which some of them have
leaped for a few seconds,
felt its suffocating
rejected buoyancy.
Something floats above their
known world leading a wake
of uncountable death.
What if they organized
into a rebellion?

OCTOPUS EMPIRE
by Marilyn Nelson
Meanwhile, in those 550 million years, we evolved into creatures that placed themselves at the center of the universe and atop the evolutionary ladder, only to find ourselves in an ecological furnace of our making and to reluctantly consider that we might not, after all, be the pinnacle of Earthly intelligence.
For the vast majority of the evolutionary history of our species, we have assumed that humans alone have consciousness. Descartes, who so greatly leapt the scientific method forward by pioneering empiricism, also paralyzed our understanding of the mind with his dogmatic declamation that non-human animals are automata — fleshy robots governed by mechanistic reflexes, insentient and incapable of feeling. It took four centuries for this dogma to be upended after a young primatologist began her paradigm-shifting work in Gombe National Forest in 1960. Despite the tidal wave of dismissal and derision from the scientific establishment, Jane Goodall persisted, revolutionizing our understanding of consciousness and of our place in the family of life.

The octopus branched from our shared vertebrate lineage some 550 million years ago to evolve into one of this planet’s most alien intelligences, endowed with an astonishing distributed nervous system and capable of recognizing others, of forming social bonds, of navigating mazes. It is the Descartes of the oceans, learning how to live in its environment by trial and error — that is, by basic empiricism.
[embedded content]

This is the eighth of nine installments in the animated interlude season of The Universe in Verse in collaboration with On Being, celebrating the wonder of reality through stories of science winged with poetry. See the previous installments here.
More than half a century later, some of the world’s leading neuroscientists composed and co-signed the Cambridge Declaration of Consciousness, asserting that a vast array of non-human animals are also endowed with consciousness. The list named only one invertebrate species.

Previously in the series: Chapter 1 (the evolution of life and the birth of ecology, with Joan As Police Woman and Emily Dickinson); Chapter 2 (Henrietta Leavitt, Edwin Hubble, and the human hunger to know the cosmos, with Tracy K. Smith); Chapter 3 (trailblazing astronomer Maria Mitchell and the poetry of the cosmic perspective, with David Byrne and Pattiann Rogers); Chapter 4 (dark matter and the mystery of our mortal stardust, with Patti Smith and Rebecca Elson); Chapter 5 (a singularity-ode to our primeval bond with nature and each other, starring Toshi Reagon and Marissa Davis); Chapter 6 (Emmy Noether, symmetry, and the conservation of energy, with Amanda Palmer and Edna St. Vincent Millay); Chapter 7 (the science of entropy and the art of alternative endings, with Janna Levin and W.H. Auden).
Now scientists have found
a group of octopuses
who seem to have a sense
of community, who
live in dwellings made of
gathered pebbles and shells,
who cooperate, who
defend an apparent
border. Perhaps they’ll have
a plan for the planet
in a millennium
or two. After we’re gone. 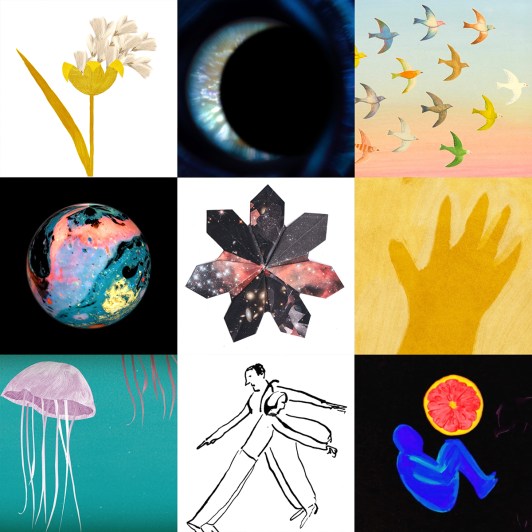 The “blind intelligence” by which a tree orients to the light in order to survive is a kind of hard-wired sentience, intricate and interconnected and aglow with wonder we are only just beginning to discover. But it is not consciousness as we understand it — that miraculous emergent phenomenon arising somewhere along the spectrum of sentience to endow creatures with the ability not only to be aware of our surroundings, not only to react to them with automated actions, but to respond to them with some measure of foresight, which presupposes some measure of hindsight, which in turn presupposes some measure of self-awareness, which culminates in qualia — the set of subjective experience that is the central fact of consciousness, the fundament of our lives.

That is what Marilyn Nelson explores with great playfulness and poignancy in her poem “Octopus Empire,” originally published in the Academy of American Poets’ poem-a-day lifeline of a newsletter and now brought to life here, for this seventh installment in the animated Universe in Verse, in a reading by Sy Montgomery (author of the enchantment of a book that is The Soul of an Octopus) with life-filled art by Edwina White, set into motion by her English collaborator James Dunlap, and set into soulfulness by Brooklyn-based cellist and composer Topu Lyo.