Here’s what to know about Trivia Quest, including how to play and when new episodes will be released.
On April 1, Netflix released the first episode of an “interactive daily quiz show” based on the app. Called Trivia Quest, the offering is light on the “show” and heavy on the “quiz.” A basic storyline involves saving some occupants of Trivia Land from a villain named Evil Rocky, but for the bulk of each episode, you’re answering onscreen questions with your remote.
Trivia Quest is based on the mobile game Trivia Crack, which lets you compete against friends or random opponents to see who can be first to answer questions and gather the six crowns needed to win. Unlike the app, Trivia Quest is for a single player and asks you to knock out trivia to complete a storyline.

Trivia Crack, an addictive mobile game from 2013 that sees players spin a colorful wheel, answer questions and collect crowns to defeat an opponent, has been turned into a TV show.
Trivia Quest isn’t Netflix’s first interactive project. You might remember Black Mirror: Bandersnatch, an engrossing choose-your-own-adventure movie from 2018. The Unbreakable Kimmy Schmidt special, Kimmy vs the Reverend, also turned some control over to the viewer.
You can free the anthropomorphic occupants of Trivia Land by acing quiz questions.

How to play Trivia Quest

That depends, of course, on how good you are at trivia. In standard mode, the answer to a question can sometimes be inferred by clues in the question. Hard mode will probably stump you a little more, unless you aren’t fazed by questions like, “What did Darwin call ‘the most peculiar and the most human of all expressions?'” or “A stolen Goya painting appears in the lair of which James Bond villain?”
The first episode of Trivia Quest arrived April 1. Netflix releases new episodes daily and plans to do so through the end of the month.

As of April 7, seven Trivia Quest episodes are available. Netflix plans to release a new installment every day until April 30.

The story is pretty silly, but if you’re just there for the brain-teasers, that may not matter much. 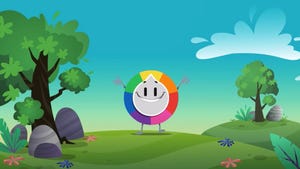