To coincide with tickets going on sale, Marvel has dropped a new Thor: Love and Thunder teaser trailer. It reveals new footage from the Thor sequel, including a scene where Thor gives an inspirational speech.
It happens about halfway through the minute-long teaser. Catch it below. Most of the other scenes appeared in the official Thor trailer, mainly including fight sequences. Thor’s enemy this time around is Gorr the God Butcher (Christian Bale), who promises that, “All gods will die.” He also reveals a little more personality, grinning and declaring in a sneery, Orc-like manner, “How exciting.”
Thor’s speech doesn’t go totally to plan, with insectoid warrior Miek drawing noisily with markers on a whiteboard in the background.
Thor: Love and Thunder arrives in theaters July 8. Grab tickets at Fandango now.
Valkyrie (Tessa Thompson) can also be seen in battle with the Voldermort-esque Gorr and Mighty Thor, aka Jane Foster (Natalie Portman), is there wielding Mjolnir the hammer. 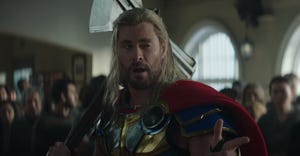