Students at Mount St. Mary’s University in Maryland are calling for the resignation of philosophy professor Joshua Hochschild because of an article he wrote earlier this month for The American Mind, a publication of the Claremont Institute, a conservative advocacy organization.
* Earlier reporting of this story elsewhere (for example) said that the students were calling for Hochschild’s firing. It appears those reports were mistaken. An early screengrab of the petition contains the “resignation” language. 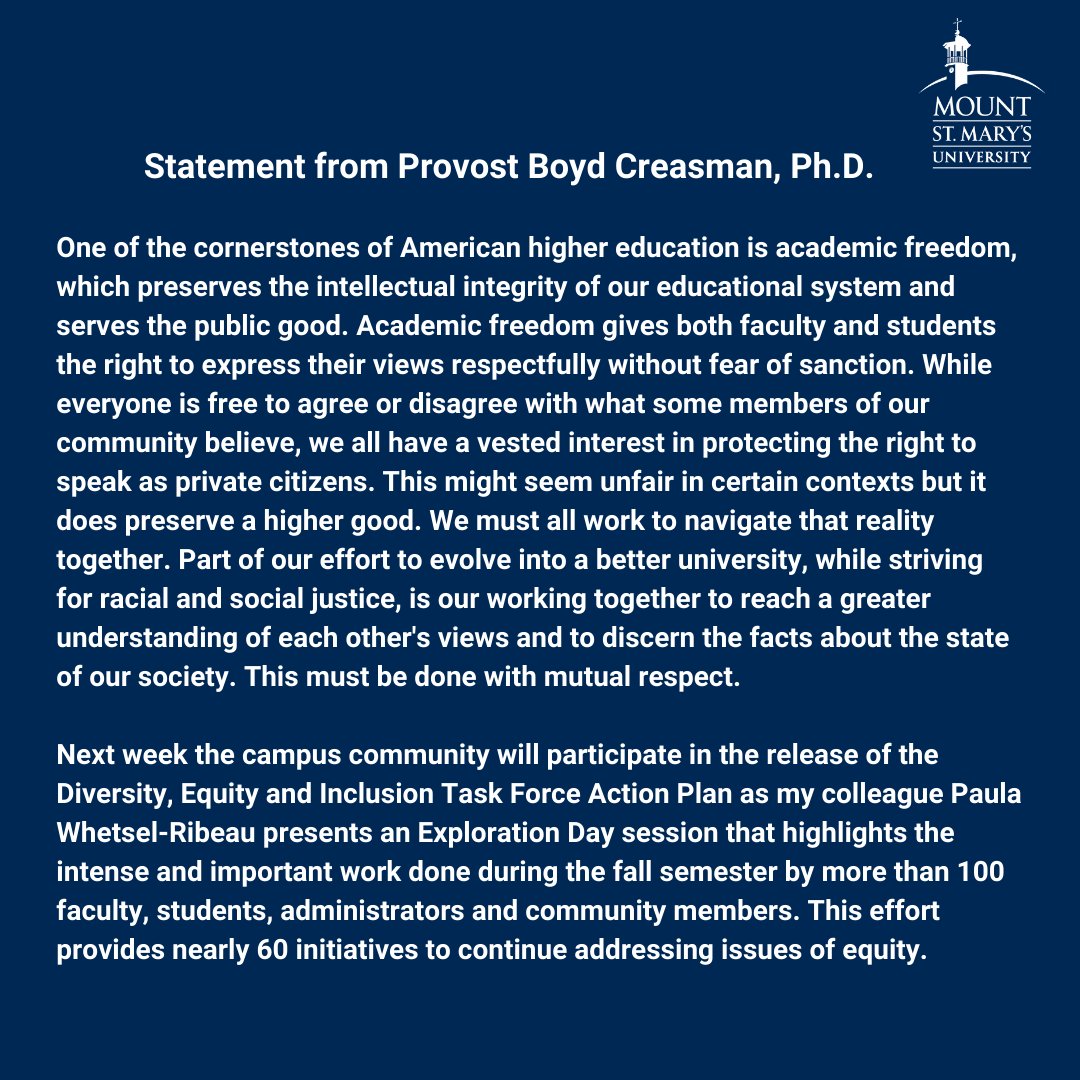 Readers should note that though he calls the article “semi-autobiographical,” it is not clear to what extent, if any, Professor Hochshild is one of the Trumpers whose views he expresses in his article, nor is it clear from the article that he actually attended Trump’s speech on the 6th or the subsequent violent attempt to halt Congress’s certification of votes. Professor Hochschild himself says on Twitter, “I did not participate in any riots,” but he might also deny that there was a riot, as in his article he describes the march on the Capitol as “a protest” of mostly “cheerful and patriotic, generous and civic-minded, orderly and polite” people. In any event, he says of the article, “I wrote a story to promote understanding. No other intention: not to advance an agenda, nor offend individuals. Feel free to criticize me for it.”
In light of the publicity that the response to Professor Hochschild’s article is getting, the provost of Mount St. Mary’s University issued a statement reiterating its commitment to academic freedom, calling for members of the university to work together with “mutual respect” to “reach a greater understanding of each other’s views and to discern the facts about the state of our society,” and announcing several diversity-related initiatives:
** Prompted by comments from Daniel Greco, David Wallace, and Daniel Groll, this paragraph has been revised. So later readers can understand what they are responding to in their comments, below is the text that was replaced:
The students and others who have signed the petition appear to be doing just that. Are they doing more than that? It is not clear. The petition calls for Professor Hochschild to resign.* Such a request does not itself call for a violation of his academic freedom, which unambigously protects him from any institutional disciplinary measures for writing the article. Yet the petition also says, “Immediate action must be made, and I implore The Mount to rethink their decision of inactivity.” This statement is presumably aimed at the university’s administration, and seems to call for the university to take action in the wake of Hochschild’s article. Whether the petitioners intend such action to be something like disciplining or firing Hochschild, which would be a call for his academic freedom to be violated, or instead something like issuing a statement, hosting a public conversation about the article, or launching various initiatives to counter a perceived “hostile environment”, is unclear. Of course, people may take issue with the petition’s main idea that because of his views, Hochschild should no longer work at the university.**
I find it repulsive that Hochschild calls for respectability and humanity when the actions of Trump supporters on January 6 proved to be less than that. I find it telling that he asks for decency when there are prominent white supremacists rubbing elbows at the same event as he, and proudly boasting racial symbolism along with the American flag. Lastly, I find it incriminating that he went to such frivolous extremes to weave a narrative in which he is the victim of attending an event where people lost their lives, and white supremacy ran rampant. For him to call for respect in a situation where his peers call for the eradication of my being, yet he claims to uphold pro-life, is bigotry. I refuse to accept or respect this.
The article, “Once Upon a Presidency,” is an attempt to sympathetically convey the perspective of supporters of Donald Trump (including those who were at the January 6th attack on the Capitol), portraying the ignorance, question-begging, conspiracy-theorizing, hypocrisy, and anti-intellectualism common to Trumpism as reasonable or understandable. While absurd, it is at the same time actually a useful look at recent events through a mindset many readers of Daily Nous will find alien.
The article caught the attention of Mount St. Mary’s students, who have launched a petition calling for Professor Hochschild’s resignation. Brea Purdie, the student who authored the petition, writes:
The students and others who have signed the petition appear to be doing just that. In calling for Professor Hochschild to resign, rather than for the university fire him* they do not appear to be requesting the university violate his academic freedom, which unambigously protects him from any institutional disciplinary measures for writing the article. Rather, they are making use of their own free speech rights to protest and object to Professor Hochschild’s views. [Edited to add: However, as Daniel Greco’s comment, below in which he quotes a part of the petition text that asks the university to “rethink their decision of inactivity”.] A Maryland television news station covers the story here.