In this passage from Modern Nature, Jarman does for the night sky what Rachel Carson did a generation earlier for the ocean as a lens on the meaning of life. Complement it with the great nature writer Henry Beston — Carson’s great hero — on night and the human spirit, then revisit poet Marie Howe’s Whitman-inspired, Hawking-inspired ode to our cosmic belonging.
The orchestra has struck up the music of the spheres, the spectral dancers on the fated liner whirl you off your feet till you feel the great globe move. Light-hearted laughter. Here man* has invented the heavens’ but the moon, not to be usurped, shines sickle bright, gathering our souls.
From his starlit garden perch between the lighthouse and the power plant, Jarman suddenly sees the familiar landscape with new cosmic eyes, all radiance and rapture:
There is an elemental cosmic loneliness in the pit of every human soul. We spend our lives trying to make it bearable and call our efforts love, or art. (Which might, in the end, be one and the same.) Every once in a while, we are lifted out of the pit into a salutary sense of connection and congress with something larger — a sense of being but one wave among the incalculable lapping lonelinesses in the great sea of being, but one string in the grand symphony orchestra of aliveness.

One spring Saturday, after hanging five new paintings on his walls — “all collages of found objects on gold backgrounds” — Jarman writes in the journal:

[embedded content]
Never in my many sleepless nights have I witnessed a spectacle like this. Not the antique bells of the flocks moving up a Sardinian hillside, the barking of the dogs and the sharp cries of the shepherd boys, nor moonlit nights sailing the Aegean, nor the scented nights and fireflies of Fire Island, smashed glass star-strewn through the piers along the Hudson — nothing can quite equal this.
The night sky here is a riot that outshines the brightest lights of Piccadilly; the stars have the intensity of jewels. So flat is the Ness that those stars that lie at the horizon touch your very feet and the moon tips the waves with silver.

The passage reminds me of a breathtaking piece by my composer-friend Jherek Bischoff — a piece inspired by one particular night from his boyhood, living on a sailboat with his parents hundreds of miles from land, when the surface of the open ocean was so still that he could no longer discern the horizon line: the stars in the sky and their reflections in the water appeared as a single sphere of spacetime, inside which he felt to be floating.
A hallucinatory dusk, washed with colours to drive Monet to suicide. At sunset the brightest sickle moon appeared in a gentle blue sky; minute by minute gathering in intensity it stayed until just before midnight.
Many of humanity’s vastest, most sensitive-souled minds have turned to the natural world not only for creative fuel but for a mighty antidote to melancholy. Few have captured that ecstatic sense of cosmic belonging more exquisitely than the English artist and activist Derek Jarman (January 31, 1942–February 19, 1994) in Modern Nature (public library) — his almost unbearably beautiful record of leaving London to live in a former Victorian fisherman’s hut nestled between an old lighthouse and a nuclear power plant in a newly designated a conservation area on the shingled shores of Kent. There, on this solitary headland, salving grief through gardening, Jarman discovered the consolations of a different kind of time — not the time of atoms and anxieties, but the time of seeds and stars. 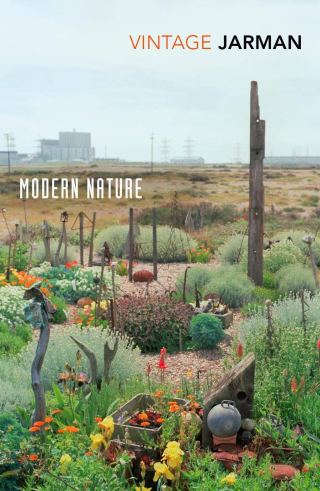 In consonance with his artistic and spiritual progenitor Walt Whitman’s faith in the indelible connection between music and nature and with Joseph Cornell’s artistically formative experience at the planetarium, Jarman adds:

For many of us, this sense awakens most readily in the natural world, where we feel ourselves part of larger rhythms and larger scales beckoning us to take the telescopic perspective of time, space, and being with the broadened lens of the mind. Whitman felt it most intimately “on the beach alone at night.” Hesse felt it among the trees. Antoine de Saint-Exupéry felt it in the desert. I feel it with my hand against the mosses carpeting the old-growth coastal forest.

The nuclear power station is a great ocean liner moored in the firmament, ablaze with light: white, yellow, ruby. Whilst round the bay the lights stretch from Folkenstone to Dover. High above, jet liners from the south float silent in the stars. On these awesome nights, reduced to silence, I walk across the Ness.

Night clear as a bell — the blue passed through violet with strands of rose and old gold to become a deep indigo. So etched were the moon and stars they seemed to have been cut out by a child to decorate a crib.