The apparent removal of the episodes comes as controversy swirls around Rogan for promoting COVID misinformation in his podcast. Rocker Neil Young and folk icon Joni Mitchell pulled their music from Spotify after an open letter signed by more than 250 medical professionals, researchers and professors pointed to Rogan’s podcast as evidence the streaming service was giving COVID misinformation a platform.

It’s unclear when the episodes stopped being available. When Rogan’s podcast moved to Spotify officially, 42 episodes didn’t make the move over various issues with the service’s content rules.

CNET confirmed that the episodes newly reported as missing weren’t available on Spotify anymore. The company and Rogan didn’t immediately respond to requests for comment.
Spotify quietly removed roughly 70 episodes of Joe Rogan’s podcast after expressing support for the comedian, who’s stirred controversy for spreading COVID misinformation. Rogan went on Instagram Saturday to discuss the content of the old episodes, addressing two videos on social media of him saying the n-word and another where he described a black neighborhood as being similar to the Planet of the Apes movie.
Rogan went on to say in the video he hopes this is a teachable moment for anyone who didn’t understand how offensive the n-word is coming from a white person. He ended his video with “sincere deepest apologies.” The comedian didn’t state the missing episodes were deleted from Spotify due to the usage of the n-word.
The removal of the episodes, all of which were recorded years before the pandemic began, was spotted by JREMissing Friday. The fan-made website uses Spotify’s API to compare available episodes to a database of all episodes recorded.
“There’s nothing I can do to take that back. I wish I could. obviously, that’s not possible,” Rogan said in an Instagram video. “I certainly wasn’t trying to be racist, and I certainly would never want to offend someone for entertainment with something as stupid as racism.’
Rogan podcast fans have fewer episodes to listen to now on Spotify.
CEO Daniel Ek has defended the inclusion of Rogan on the company’s roster and told a company town hall that the podcast was vital to Spotify’s success. 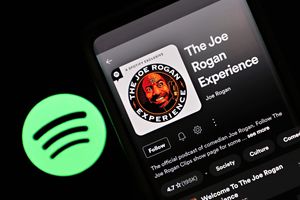