One of the best arguments for Inside as an ideal piece of pandemic art is that it doesn’t outright acknowledge the pandemic. It’s a feeling so deeply familiar at this point, Burnham never has to utter “COVID-19.” There are allusions, for sure. At one point Burnham says, “I’ve learned that real-world human-to-human tactile contact will kill you.” But many of the songs have nothing to do with the pandemic, such as Welcome to the Internet, a wild and unsettling overview of the chaos of life online, or his ode to Amazon founder Jeff Bezos.
Burnham gets increasingly disheveled. He sits in the dark by himself and wears ratty T-shirts and sweats. Despite my deep-seated desire to not think about the hellscape outside anymore than I have to, I’ve watched Inside five times.
What Inside pulls off is all the more impressive because I know it’s not real. Burnham didn’t actually spend every waking minute in that guesthouse. As I’ve learned from watching earlier specials of his and plenty of clips on TikTok, he’s got a penchant for constructing moments that feel real, only to be revealed as a part of a bit. If he didn’t wash his hair, it was on purpose. If he knocked over the camera, it was on purpose.

Burnham, having a well-lit existential crisis about turning 30.
Of course, that’s not feasible, and the pandemic did not, in fact, end. But, somehow, Inside helped scratch that itch for me. The claustrophobia and isolation Inside represents on screen — the quick, knowing lyrics about “being inside, trying to get something out of it” — made me feel a little better about confronting the preceding year of living solo, looking it dead in the face and acknowledging how much it sucked, even if I guiltily got through it with job, health, friends and family all intact. No matter how much time you spend on Zoom, there’s no fun way to hide from sickness and death.

The problems that existed before the pandemic — the contrived nature of social media (White Woman’s Instagram), the maw of content production (Don’t Wanna Know), the inevitability of aging (30) — all continue to exist, but they now stand backlit by the inescapable reality of our collective situation.

The sheer vibes of lying on a pillow on the floor, wrapped in a blanket, eyes closed while speaking into a mic — having not much to offer but still having to perform — are real. 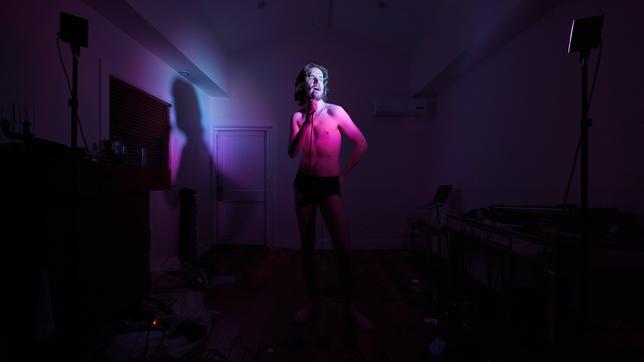 Maybe that speaks to his capacity for empathy as an artist. Toward the end of the special, Burnham performs a song called All Eyes on Me, a nearly delirious number bathed in blue light, in front of a nonexistent roaring crowd. His voice is digitally pitched down, and he sways, against a wall-size projection of himself. He talks about having quit touring the last five years because he was having panic attacks, and how just as he felt he might be ready to go back out into the world — well, you know what happened. You don’t need a pandemic to keep you cooped up.
I’ve made a grand exception, though. In May, comedian Bo Burnham released a special for Netflix called Inside. Set in a small guesthouse, Inside is an hour and a half of Burnham’s signature comedic songwriting, laced with some in-between scenes, and framed as if he spent the entire year locked inside with a B&H catalog’s worth of gear, playing with lights and cameras and barely patching up his ever-worsening mental state by making the special.  When Inside hit Netflix, I’d been fully vaccinated for a month. I didn’t rush back into the world, but rather took small steps out, returning to my strolls through Target, ducking into the grocery store because I forgot to buy an onion. I dared to hug a friend. As it seemed for a brief moment that we might actually come out of this whole mess, I was chased by a nagging feeling that there should be some kind of worldwide debrief on everything that happened. Surely we could all have a meeting and say, “Well, that was absolutely awful.”
I’ve been dreading pandemic-influenced art. It’s inevitable that such a global, life-altering event would seep into movies, music and TV. But for me, living through it has been enough. So no, I don’t want to see the characters from my favorite TV show reuniting on Zoom.
Bo Burnham, a whole mood.
There are no jokes about sourdough starter or toilet paper. Because the mental load of living through a pandemic isn’t really about the TP, right? It’s about the persistent malaise, the fear, either low-lying or full-blown, and whatever German word means “watching the world end but still having to pay rent.” Burnham captures this not in tired jokes about hand sanitizer, but in the way he runs his hand over his face during the in-between moments, or more obviously in bits such as the sendup of Twitch streaming, where he plays a video game that includes the option Press A to Cry. 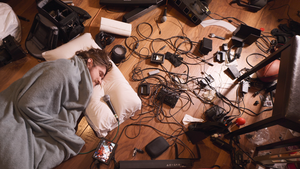