Upon learning that the city of Ben Tre had been bombed and hearing an American officer declare, in his recollection, “that he had to destroy the town in order to save the town,” Thich Nhat Hanh saw war clearly for what it is — a pinnacle of the anger with which we humans so often cover up our loneliness, the loneliness which tyrants so often use to flare up terror.
The individual has to wake up to the fact that violence cannot end violence; that only understanding and compassion can neutralize violence, because with the practice of loving speech and compassionate listening we can begin to understand people and help people to remove the wrong perceptions in them, because these wrong perceptions are at the foundation of their anger, their fear, their violence, their hate.
In his On Being conversation with Krista, Thich Nhat Hanh unpeels the poetic abstraction to reflect on the underlying practice the verse speaks to — mindfulness (which in 2002 was far from a mainstream notion in the West) as a practical antidote to anger:
A salve, a self-consolation, a spare and powerful spell against anger — the most fundamental and fundamentalist war against ourselves — the poem calls to mind poet May Sarton’s exquisite conception of anger as “a huge creative urge gone into reverse.”

Meanwhile, the Vietnamese Zen monk and peace activist turned poet Thich Nhat Hanh (October 11, 1926–January 22, 2022), just a few years younger than Paley, was channeling a kindred sentiment into one of his poems as he watched the world come undone by the oldest ugliness in the bosom of the human animal, in a war breaking countless hearts and robbing countless lives of the gift of growing older.
Published decades later in Call Me by My True Names: The Collected Poems of Thich Nhat Hanh (public library), as the world was coming undone anew in the self-redundantly named “war on terror,” it is read here by Thich Nhat Hanh himself in its original Vietnamese, then by Krista Tippett in English, as part of their altogether shimmering 2002 conversation about the practice of mindfulness and compassion at the heart of our humanity:

We have to remain human in order to be able to understand and to be compassionate. You have the right to be angry, but you don’t have the right not to practice in order to transform your anger… When you notice that anger is coming up in you, you have to practice mindful breathing in order to generate the energy of mindfulness, in order to recognize your anger and embrace it tenderly so that you can bring relief into you and not to act and to say things… that can be destructive. And doing so, you can look deeply into the nature of your anger and know where it has come from. 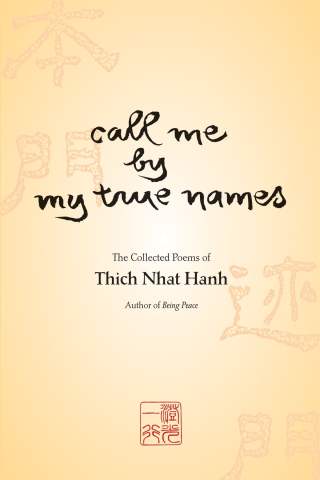 “The main thing is this — when you get up in the morning you must take your heart in your two hands,” the poet and storyteller turned activist Grace Paley’s father told her in what remains the finest advice on growing older. “You must do this every morning.”
Complement with Ursula K. Le Guin on anger and its antidote, then revisit Thich Hhat Hanh on the art of deep listening, the four Buddhist mantras for turning fear into love, and his lovely youthful account of the library epiphany in which he lost his self and found himself.
[…]

FOR WARMTH
by Thich Nhat Hanh