CNET Science
The elephants started off last March, leaving a nature reserve in Xishuangbanna, and have traveled more than 300 miles (500 kilometers) so far. There were 16 in the group then, but some have turned around, and others have given birth, making the group now down to 15, the Times reports.

Not all who wander are lost, J.R.R. Tolkien once wrote. A herd of elephants in China might agree with that sentiment. Fifteen wild Asian elephants have been slowly making their way across China for over a year, delighting social media, eating and trampling crops, and causing more than a million dollars worth of damage.
From the lab to your inbox. Get the latest science stories from CNET every week.

But not everyone is laughing. The elephants have caused 412 separate incidents of damage costing about .1 million (£779,894, AU.4 million)  in losses, state news agency Xinhua reported, as cited by CNN. Although no casualties have been reported, the animals are being closely monitored as they keep on trunking.
Monitoring images show the herd includes six female adult elephants, three male adults, three sub-adults and three cubs.
Chinese social media users seem entertained by the herd. When residents in a town on the elephants’ path prepared corn stalks for the animals to munch, the hashtag “northbound wild elephants’ buffet site” trending on social-media platform Weibo. 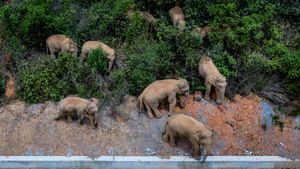