Ancient southwesterners gave turquoise, the greatest wealth, as offerings to water, the desert’s greatest gift. They left tokens of turquoise at canyon seeps and springs amid emerald mosses, maidenhair ferns, creamy blooms of columbine, crimson monkey flowers, dragonflies the color of flame, and heron-blue damselflies with bodies as thin as a vein. From turquoise they carved tadpoles a quarter-inch long and set raised turquoise eyes in toads of black jet. With turquoise they traded for copper bells, macaw feathers, the skins and plumes of parrots, and pearlescent shells from the Pacific and the Sea of Cortez — the stone of the desert for the glories of sea and forest. 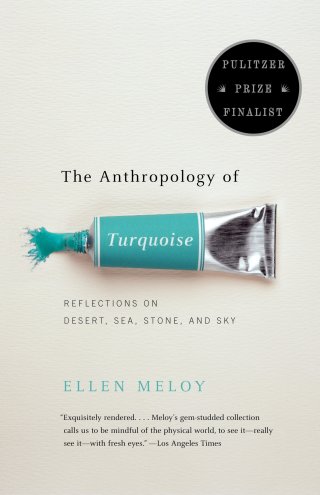 Between the senses and reason lies perception. At home or afield, that is where amazement resides, shunning explanation… Intoxication with color, sometimes subliminal, often fierce, may express itself as a profound attachment to landscape. It has been rightly said: Color is the first principle of Place.
A gorgeous read in its entirety, The Anthropology of Turquoise (public library), published shortly before Meloy’s sudden and untimely death, earned her a posthumous John Burroughs Medal — the Nobel Prize of nature writing, of which Carson was also a recipient. Complement it with a symphonic illustrated celebration of nature’s rarest color, then revisit Maggie Nelson’s exquisite love letter to blue.

But the deepest story of color is the most intimate one, the one that lives most closely to the perceptual locus of feeling that defines our entire experience of life. Meloy writes:

The complex human eye harvests light. It perceives seven to ten million colors through a synaptic flash: one-tenth of a second from retina to brain. Homo sapiens gangs up 70 percent of its sense receptors solely for vision, to anticipate danger and recognize reward, but also — more so — for beauty. We have eyes refined by the evolution of predation. We use a predator’s eyes to marvel at the work of Titian or the Grand Canyon bathed in the copper light of a summer sunset.

In primitive life forms the eye began as a light-sensitive depression in the skin; the sense of sight likely evolved from the sense of touch.

Phosphates are known for their bright colors. In turquoise, according to some mineralogists, the blue comes from the copper; the green comes from the presence of iron. Dark, spidery veins reveal the matrix in which turquoise participates; the veins are usually limonite, iron-stained quartz, metallic oxides, or other minerals.

Meloy traces the layered sensorial story of turquoise and its genesis in the body of the world — a testament to the indivisibility of science and culture:
Colors challenge language to encompass them. (It cannot; there are more sensations than words for them. Our eyes are far ahead of our tongues.) Colors bear the metaphors of entire cultures. They convey every sensation from lust to distress. They glow fluorescent on the flanks of a fish out of the water, then flee at its death. They mark the land of a woman deity who controls the soft desert rain. Flowers use colors ruthlessly for sex. Moths steal them from their surroundings and disappear. An octopus communicates by color; an octopus blush is language. Humans imbibe colors as antidotes to emotional monotony. Our lives, when we pay attention to light, compel us to empathy with color.

Turquoise is ornament, jewel, talisman, tessera. It is religion. It is pawn. It is not favored for pinkie rings. It did not likely come from Turkey, its namesake, but took the name of the land it crossed on the old trade routes from Persia to Europe.

We read color the way we read place: through our senses — these probosces of consciousness, increasingly severed by a culture that kidnaps us away from our bodies to hold our consciousness hostage before and behind screens. Echoing poet and science historian Diane Ackerman — who wrote so beautifully in her Natural History of the Senses that “there is no way in which to understand the world without first detecting it through the radar-net of our senses” — Meloy writes with soulful urgency:

Two centuries after Goethe wrote in his poetically beguiling, philosophically promising, but scientifically incorrect theory of color and emotion that “colors are the deeds and sufferings of light” and two generations after Frida Kahlo considered the meaning of the colors, Meloy bridges the metaphysical and the scientific across the undercurrent of the poetic:
The color of life, the actual chromatic hue that makes our rocky planet a living world, is somewhere between the blue of water and the green of land — when Carl Sagan looked at the grainy Voyager photograph of Earth seen from the far reaches of the Solar System for the very first time, he famously eulogized our Pale Blue Dot. But the color of that dot “suspended in a sunbeam” is rather between blue and green: a pixel of turquoise.
In a sentiment evocative of the Scottish mountaineer and poet Nan Shepherd’s lovely observation that “place and a mind may interpenetrate till the nature of both is altered,” she adds:

The very concept of empathy as we know it was born in the early twentieth century to describe the experience of projecting oneself into a work of art — a projection screened by vision, an instrument millions of years in the making. It may be, in fact, that empathy and the eye are the twin triumphs of evolution. Meloy traces the interdependent development of the two:

As a desert dweller, I believe that water is a truer entry to Place. In the West, aridity defines us. There is abundant water here in the Yucatán — ocean, marsh, lagoon, underground rivers, cenotes (natural wells where freshwater surfaces), a tropical forest swollen with transpiration. Storms bring a hurricane’s eyewall of torrents or nothing at all; even jungles have droughts. By invasion and sheer presence, the sea pushes itself into what is drinkable and what is heard, or what you miss hearing when you are distant from the surf. The sea holds an abundance of comfort and inspiration and danger, all that a person needs in order to rise to the full largesse of beauty. It seems that if you allow this beauty to become a blank, if you turn your back to the blues and deny your dependence on them, you might lose your place in the world, your actions would become small, your soul disengaged.

Turquoise occurs in limestone, batholithic and feldspathic granites, shale, and trachyte, rocks that are found nearly everywhere. Unless they are in an arid environment, however, they are not likely to bear turquoise. Although turquoise has more than one origin, most types formed million years ago, when groundwater seeped into alumina- and copper-rich mineralized fractures in zones of igneous rock. What has been said about gold can be said about turquoise: turquoise is the burden of waters.

“The deep blue water of the open sea far from land is the color of emptiness and barrenness; the green water of the coastal areas, with all its varying hues, is the color of life,” Rachel Carson wrote as she illuminated the science and splendor of the marine spectrum, enriching the literary canon of history’s most beautiful meditations on the color blue.

Sometimes, a truth can be so deep, so elemental, that it requires no explicit recognition, no echo in language. Goethe — who attempted to defy Newton while anticipating quantum physics — considered the purest form of blue a transcendent nothingness, “a stimulating negation.” Meloy writes:

Colors are not possessions; they are the intimate revelations of an energy field… They are light waves with mathematically precise lengths, and they are deep, resonant mysteries with boundless subjectivity.

That color — its chromatic science and its cultural symbology — is what Ellen Meloy (June 21, 1946–November 4, 2004) explores in The Anthropology of Turquoise: Reflections on Desert, Sea, Stone, and Sky (public library).

[…]
The chemistry of turquoise: CuAl6(PO4)4(OH)8•4H2O, a hydrous phosphate of copper and aluminum. The copper and aluminum — along with iron and other mineral traces — join with a phosphate radical, a group of oxygen atoms so clustered around nonmetallic phosphorus that they behave like a single atom.
Within every color lies a story, and stories are the binding agent of culture.
It seems as if the right words can come only out of the perfect space of a place you love.
There is no more fertile a region of subjectivity than language — the human effort to contain the uncontainable, the fluid, the nuanced into vessels of concept and category. The chromatic boundlessness of the spectrum therefore has a peculiar relationship to language, exposing the limitations of our primary sensemaking instrument against the limitless vistas of nature. (That might be why Darwin took with him on The Beagle a pioneering nomenclature of color as he set out to classify, categorize, and make sense of the natural world.) In a passage that illustrates just how primordial the link between the body and the mind is, just how inseparable our psychology from our physiology, Meloy writes:

Against this cultural-cosmic backdrop, she considers “the dignity of turquoise”:

There was biology, and then there was physics: Three centuries after Newton first unwove the rainbow to launch the dawn of optics and the study of light as a stream of particles, quantum mechanics staggered our elemental grasp of reality by positing that light — which is how and why we see color — might be both particle and wave. At the heart of this dizzying notion, called complementarity, is the idea that “you can recognize a deep truth by the feature that its opposite is also a deep truth,” in the words of the Nobel-winning physicist Frank Wilczek.

It has been shown that the words for colors enter evolving languages in this order, nearly universally: black, white, and red, then yellow and green (in either order), with green covering blue until blue comes into itself. Once blue is acquired, it eclipses green. Once named, blue pushes green into a less definite version. Green confusion is manifest in turquoise, the is-it-blue-or-is-it-green color. Despite the complexities of color names even in the same language, we somehow make sense of another person’s references. We know color as a perceptual “truth” that we imply and share without its direct experience, like feeling pain in a phantom limb or in another person’s body.

Each of us possesses five fundamental, enthralling maps to the natural world: sight, touch, taste, hearing, smell. As we unravel the threads that bind us to nature, as denizens of data and artifice, amid crowds and clutter, we become miserly with these loyal and exquisite guides, we numb our sensory intelligence. This failure of attention will make orphans of us all.