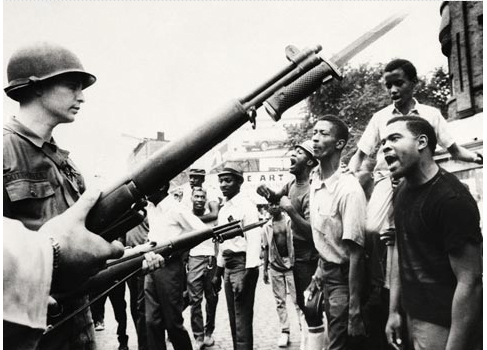 When: Saturday and Sunday, July 14 and 15, at 3:00PM
Where: Detroit Historical Museum, 5401 Woodward Avenue Detroit, Michigan 48202
Visit our local events calendar for a full list of events happening across the country and join our Community Network to host a screening of your own!
Join the Detroit Historical Museum for two free screenings of Revolution ’67. July 1967 doesn’t only mark a significant time in Detroit’s history, but in the history of Newark, New Jersey as well. Revolution ’67 focuses on the urban rebellion that took place in Newark, which helped reveal the long-standing racial, economic, and political forces which generated inner city poverty. Perspectives told from city officials, police and residents shed a light on what took place and how decades of industrial decline, unemployment, job and housing discrimination, and more led up to the uprising. For more information, visit detroithistorical.org or call (313)833-0277.
Officials accused the activists of wanting to overthrow the government. Was overthrowing the government a reasonable goal for people who had substantial evidence that the government was failing to meet the needs of many of the citizens of Newark? How else might activists have achieved responsive government in Newark?
For more discussion prompts, download the discussion guide.
Revolution ’67 Conversation Starters: