Digging through the surviving fragments of Bloy’s written thought, he surfaces a passage emblematic of Bloy’s uncommon physics of the metaphysical — an 1894 passage fomented by his interest in the teachings of St. Paul. Translated by Borges himself, Bloy writes:
Everything is a symbol, even the most piercing pain. We are dreamers who shout in our sleep. We do not know whether the things afflicting us are the secret beginning of our ulterior happiness or not.
Titling the essay after St. Paul’s famous cryptic statement Videmus nunc per speculum in aenigmate — loosely translated as We now see through a mirror, enigmatically — Borges considers the tribe of thinkers who have perched their efforts to reconcile knowledge and mystery, the scientific and the spiritual, on the assumption that “the history of the universe — and in it our lives and the most tenuous detail of our lives — has an incalculable, symbolical value.” With his characteristic poetic precision, he condenses this common and somewhat tired hypothesis:
No one knows the meaning of why anything comes to be, or doesn’t. Here is this pale blue orb, dropped from the tree-of-heaven onto a tiny Brooklyn point on the face of this Pale Blue Dot, itself a “mote of dust suspended in a sunbeam” within an immense and impartial universe, conceived in the creation myths and early scientific theories of our meaning-hungry ancestors as a great cosmic egg.

Every man* is on earth to symbolize something he is ignorant of and to realize a particle or a mountain of the invisible materials that will serve to build the City of God.

Here I am, and here you are, and here is the robin’s egg in its near-life collision with chance. To ask for its meaning is as meaningless a question as to demand the meaning of a color or the meaning of a bird. On this particular day, at this particular moment — the only locus of aliveness we ever have — the contour of meaning comes in shades of blue, singing only is.
No one, Borges argues, has taken this precarious hypothesis to more surefooted ground than the French novelist, poet, and philosophical pamphleteer Léon Bloy (July 11, 1846–November 3, 1917).

I recognized this upon sitting down in for morning meditation in my garden after a nightlong storm and watching an almost otherworldly deposit roll onto the cushion: a tiny, perfect robin egg, improbable and sorrowful in its displaced blue beauty.

But then I considered this chance-event as the product of the same impartial forces that deposited the exact spermatozoid of my father’s onto my mother’s ovum at the exact moment to produce the chance-event of my particular configuration of atoms animated by this particular consciousness that just is, the consciousness mourning the robin that will never be. To call one expression of chance good and another bad is mere human hubris — the hubris of narrative and interpretation superimposed on an impartial universe devoid of why, awash in is.

The outer world — forms, temperatures, the moon — is a language humans have forgotten or which we can scarcely distinguish.

[St. Paul’s statement] would be a skylight through which one might submerge himself in the true Abyss, which is the soul of man. The terrifying immensity of the firmament’s abyss is an illusion, an external reflection of our own abysses, perceived “in a mirror.” We should invert our eyes and practice a sublime astronomy in the infinitude of our heart… If we see the Milky Way, it is because it actually exists in our souls.
I considered climbing the neighbor’s colossal tree to find the storm-shaken nest and reinstate the egg. (Perfectly, the tree is an Ailanthus altissima, known as “tree-of-heaven” in its native China — a migrant now rooted in Brooklyn, like me.)
These ideas haunted Bloy, animated his pamphlets, his poems, his novels, then culminated in his 1912 book-length essay The Soul of Napoleon — a philosophical prose poem that sets out, as Borges puts it, “to decipher the symbol Napoleon, considered as the precursor of another hero — man and symbol as well — who is hidden in the future.” Bloy, translated again by Borges, writes in this uncommon work:

It takes a great sobriety of spirit to know your own depths — and your limits. It takes a special grandeur of spirit to know the limits of your self-knowledge.
A recent brush with those limits reminded me of a short, stunning essay by Jorge Luis Borges (August 24, 1899–June 14, 1986) titled “The Mirror of Enigmas,” found in his Labyrinths (public library) — the 1962 collection of stories, essays, and parables that gave us his timeless parable of the divided self and his classic refutation of time.
There is no human being on earth capable of declaring with certitude who he is. No one knows what he has come into this world to do, what his acts correspond to, his sentiments, his ideas, or what his real name is, his enduring Name in the register of Light… History is an immense liturgical text where the iotas and the dots are worth no less than the entire verses or chapters, but the importance of one and the other is indeterminable and profoundly hidden.

Borges recognized this, closing the essay with by acknowledging “it is doubtful that the world has a meaning… even more doubtful that it has a double or triple meaning.”
A century before Milan Kundera considered the eternal challenge of knowing what we really want in his classic novel The Unbearable Lightness of Being, Bloy shines a sidewise gleam on the elemental self-opacity with and within which we live: 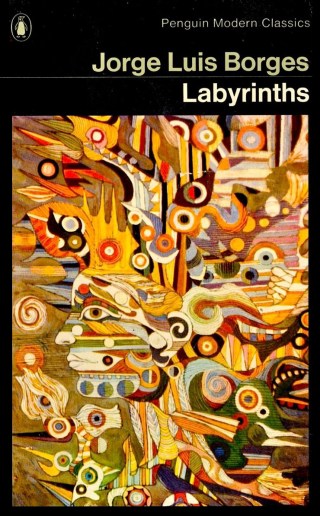