This story is part of Tech for a Better World, stories about the diverse teams creating products, apps and services to improve our lives and society. The game developer’s been awarded patents for easy communication, among other things.
In EA’s case, it’s allowing free use of its accessibility-related patents and hoping to encourage similar cooperation across the tech industry. “When you patent a technology or idea, you publish technical information that would otherwise have never been accessible to the public,” Bruzzo added. “This equips developers with the know-how to advance the state of the art in game development.”

In the game world in particular, companies like Sony have increasingly put an emphasis on adding features to titles like last year’s hit survival horror game The Last of Us Part 2, making them easier for people with disabilities to play. Microsoft, for its part, developed the Xbox Adaptive Controller, with inputs and software designed to make it easy for people who can’t use a standard video game controller.

Aside from its ping-patent, EA said it’s also making available patents that help with color vision issues and contrast ratio and hearing issues.
Electronic Arts is offering free use of five patents it’s been awarded for technology to help people with visual, hearing and other disabilities play video games. It’ll also freely offer code it’s created that helps adjust games for color blindness, brightness and contrast issues. The initiative marks the first time the game maker has offered its accessibility technology free to anyone who’d want to use them.
EA’s move is the latest way tech and gaming companies are increasingly trying to make their products easier to use by wider groups of people. Over the past few years, companies ranging from Apple to Microsoft, AT&T and even Starbucks have created new features and products to help people with a variety of needs.
The company’s announcement Tuesday coincides with its being awarded a patent for the “ping” communications system it built for its 2018 competitive online shooting game Apex Legends. In the game, players alert one another to important information by aiming their character’s gun at it and then hitting a special button. If they’re pointing at a piece of land, they alert teammates to a certain location. If they’re pointed at an enemy when hitting the button, then the team is alerted about an enemy’s position. And it’s all done without needing to chat with voice and through microphones.
Above, a default game screen from EA’s Madden NFL game. Below, with colors adjusted for deuteranopia, known as red-green color blindness. 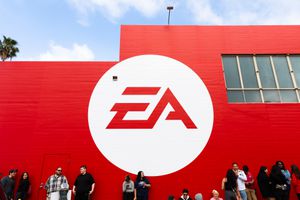