“We found that at least a quarter of the total eroded volume of Martian valley networks were carved by lake breach floods,” Planetary Science Institute (PSI) research scientist Alexander Morgan explains in a statement.
In today’s Andes and Himalayas, increased glacier melt is bloating lakes, increasing the risk of outburst floods. The concern over these floods is not so much how they may reshape the landscape, but instead the destructive threat they pose to life and property in the fertile and populated valleys below.

Now playing: Watch this: The world’s most dangerous lake is finally getting a…

“It’s been known for a while that a few select Martian valleys were formed from lake overflow flooding, but our study is the first global analysis,” Morgan said.
“Our results show that many Martian valleys are in fact more analogous to catastrophic floods on Earth, such as those that shaped the northwest United States at the end of the last glacial period,” Morgan says.

This artist’s rendering shows how a more Earth-like Mars might appear with water on its surface.
Mars is one of the smallest planets in our solar system, but it’s also home to some of the largest, deepest and most dramatic systems of canyons and valleys ever spied by human (or robotic) eyes. New research suggests many of these Martian features were formed by catastrophic climate-driven events of the sort that are currently becoming a more significant threat here on Earth.
“The science behind the devastation they trigger is the same,” PSI says.

Both on Mars and Earth, the catastrophic, landscape-altering floods were driven by warming climates. Mars would eventually go on to lose most of its atmosphere and its surface water. Here on Earth, the climate has seen an accelerated warming of late thanks to human-caused climate change.

The researchers don’t delve deeply into any connection between ancient Mars and contemporary terrestrial global warming on Earth, but on this planet today glacial lake outburst floods (GLOFs) look an awful lot like the forces that shaped ancient Mars and prehistoric Earth, albeit on a smaller scale.
Some of the deep canyons and valleys of the Himalayas and Rocky Mountains were formed as glaciers melted over 15,000 years ago and lakes below overflowed their banks.

Climate change on Earth won’t carve new canyons comparable to the Grand Canyon as it did on ancient Mars, but learning about the climatic and geological history of our neighboring planet offers yet another reminder of the power of the natural forces that our species is now directly impacting.
Morgan and colleagues applied algorithms to global maps of Mars to calculate the total eroded volume of valleys formed by lake breach floods.

2:37
Unlock the biggest mysteries of our planet and beyond with the CNET Science newsletter. Delivered Mondays.
The above video from PSI delves a bit into the difference between the ancient flooding on Mars, which was caused by the failure of the walls of impact craters turned lakeshores, and the failure of glacial moraines on Earth. 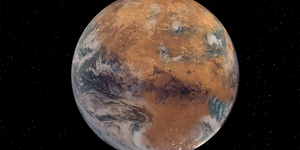