I am not an atheist or an agnostic but an acrostic. The whole thing puzzles me.
—George Carlin
I was walking down Fifth Avenue today and I found a wallet, and I was gonna keep it, rather than return it, but I thought: ‘Well, if I lost a hundred and fifty dollars, how would I feel?’ And I realized I would want to be taught a lesson.
—Emo Phillips 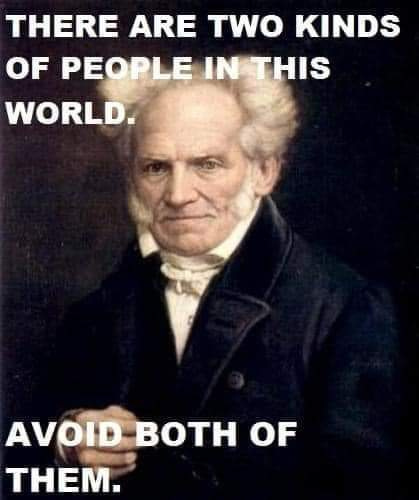 Can you rely on a virtue, ‘honesty,’ which begins with a deceptive letter, continues with a claim of unity, and winds up in a place for pigs?
—Gerald Dworkin

The same sort of persons, and often the very same persons, denounce the theory as impracticably dry when the word utility precedes the word pleasure, and as too practicably voluptuous when the word pleasure precedes the word utility.
—John Stuart Mill on critics of Utilitarianism
Schopenhauer made easy
[Holding up a book for his seminar, The Secret of Hegel] Obviously, this secret was well kept.
—Arthur Smullyan
There are philosophers who try to remove in advance every conceivable misunderstanding or misinterpretation or objection, including those that would occur only to the malicious or the clinically literal-minded.
—Bernard Williams
He cruises the libraries like an academic blue whale, filtering the ocean of scholarship for the krill of insight.
—Lewis Hyde
Feel incapable of thinking, so I read MIND.
—G.E. Moore
Some ideas are so preposterously silly that only very learned men could have thought of them… by a ‘silly’ theory I mean one which may be held at the time when one is talking or writing professionally, but which only an inmate of a lunatic asylum would think of carrying into daily life.
—C. D. Broad
Four stages of Moral thought:
Forbidden by God
Wrong because forbidden by God
Forbidden by God because wrong
Wrong
—Derek Parfit
Argument for P number 1:
Q, so why not P?
—Sidney Morganbesser
One lesson in Philosophy is as good as one lesson in piano playing.
—Wittgenstein
To become mature is to recover that sense of seriousness which one had as a child at play.
—Friedrich Nietzsche
Philosophy—The ungainly attempt to tackle questions that come naturally to children, using methods that come naturally to lawyers.
—David Hills
The way the word “determined” denoted the complete absence of volition, was what Francis thought of as Schrodingers homonym, sitting in a semantic box, not knowing whether it meant something or its opposite…existing in a determined universe it was determined to subvert.
—Edward St. Aubyn

You can’t have everything. Where would you put it?
—Steven Wright
… philosophers should entertain ideas in a patient and imaginative manner, and not treat them, or those who offer them, as the local heavies in a Western movie treat the stranger in town. It is not the most creative approach in philosophy to shoot an idea out of someone’s hand as soon as he picks it up.
—Bernard Williams
Prayer may not be very efficient when compared to celestial mechanics, but it surely holds its own vis-a-vis some parts of economics.
—Paul Feyerabend
Basically what Quine does is he goes around, locates some aspect of practice that he can pretend to defer to, and then where it doesn’t actually have the form that he likes, he acts like the practitioners are not applying their own principle consistently. There has to be a word for this… this self-serving, hypocritical, ‘I just do what they say, unless it’s not what I want, in which case I correct in light of what they would have said if they’d seen things as clearly as I do.’
—Stephen Yablo
I have been in philosophical arguments which reminded me of a Scrabble game. Words were placed on the table with no connection to those already out, no meaning appeared, and the sole purpose seemed to be to maximize points scored.
—Gerald Dworkin
The road to Hell is paved with bad distinctions.
—Alastair Norcross
A subject that cannot bear raillery is suspicious, and a jest that will not bear serious examination is false wit.
—Aristotle
Ackerman would draw renewed strength from the sound of his own voice, so that launched upon a comment of finite scope he would be refreshed by his words, and extend his remarks to fill all available space and time.
—Robert Paul Wolff
Argument for P number 2: “My argument for P has three premises:
1. Q
2. R
3. P
From these P deductively follows. Some may find the third premise controversial, but it is clear that if we replaced it by any other reasonable premise, the argument still goes through.
—Jerry Fodor
These days everybody wants to be a philosophical architect. But I have made a perfectly good living as a philosophical plumber.
—John Gardner
Hegel, installed from above, by the powers that be, as the certified Great Philosopher, was a flat-headed, insipid, nauseating, illiterate charlatan, who reached the pinnacle of audacity in scribbling together and dishing up the craziest mystifying nonsense. This nonsense has been noisily proclaimed as immortal wisdom by mercenary followers and readily accepted as such by all fools, who thus joined into as perfect a chorus of admiration as had ever been heard before. The extensive field of spiritual influence with which Hegel was furnished by those in power has enabled him to achieve the intellectual corruption of a whole generation.
—Arthur Schopenhauer
Catholic Philosophy
A Franciscan priest sits down next to a Jesuit priest while riding a train to Rome. After a while the Franciscan notices that the Jesuit is smoking and praying.
Franciscan: “I am surprised to see you doing that.”
Jesuit: “Why?”
Franciscan: “We asked the Pope himself whether we could smoke while praying and he said ‘No.’”
Jesuit: “That was your mistake. We asked the Pope if we could pray while smoking and he said we could.”
*  *  *  *  *
Some months after the Spring of 68, Sidney Morganbesser was called for jury duty, and as luck would have it, he was tapped for a case involving alleged police brutality. During the voir dire, the Assistant District Attorney assigned to try the case asked Sidney whether he had ever been treated brutally or unfairly by the police. Sidney thought for a moment and said, ‘Brutally, yes. Unfairly, no.’ The ADA asked him to explain, and Sidney told the story of the attack by the Tactical Patrol Force, at Columbia University. ‘And you didn’t think they were acting unfairly?’ ‘No,’ Sidney said, ‘they were hitting everybody.
—Robert Paul Wolff
Jewish Philosophy
What hangs on a wall, is purple and whistles?
Don’t know.
A herring.
Herrings don’t hang on walls.
So you hang it.
Herrings aren’t purple.
So paint it.
Herrings don’t whistle.
No analogy is perfect.
What it would be like to be a philosopher’s clerk: “It’ll be a matter of filing the generalisations, tidying up paradoxes, laying out the premises before the boss gets in.”
—Tom Stoppard
A good question, at least to start with, is whether what one has written is something that a grown-up, concerned, intelligent person might say to another about these subjects. Of course it is not the only question, and it does not always apply, since philosophy is not just ordinary conversation. Philosophy is rather, in these fields [ethics and politics], the extension of our most serious concerns by other means, but at least it should introduce our ordinary concerns in a humanly recognisable form. Of much philosophy purportedly about ethical or political subjects (and other kinds as well) one may reasonably ask: What if someone speaking to me actually sounded like that?
—Bernard Williams
Trying to understand the world through reasoning alone is like setting off across the Sahara with a limitless supply of water but nothing else.
—Bryan Magee
If you become a philosopher you’ll be able to read anything you want and call it work.
— Daniel Dennett
Will all the people here who have telekinetic powers please raise my hand.
—Steven Wright
They muddy the waters, to make it seem deep.
—Friedrich Nietzsche
What I hated most about Kuhn’s lectures was the combination of obscurantism and dogmatism. On one hand, he was extremely dogmatic. On the other, it was never clear about what.
—Errol Morris on Thomas Kuhn
I did all the major vices—gambling, drugs, pornography and public schools.
—Bernard Williams ( speaking of the government committees he served on)
He has a new collection coming out, Laughing Matter, and in this guest post shares excerpts from it.