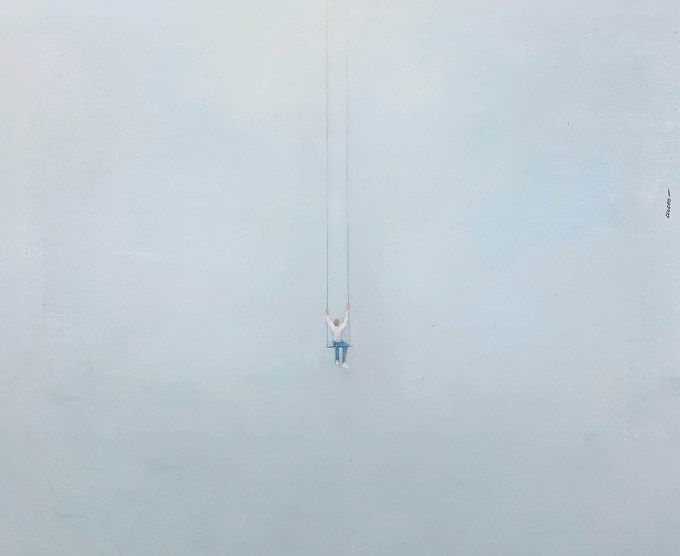 There, he dreams of flying up and away like a bird, soaring into the sky above the flowers, savoring the light and life of nature, there in the remote countryside.
In this blur of being by ourselves, we learn to be ourselves. One measure of maturity might be how well we grow to transmute that elemental loneliness into the “fruitful monotony” Bertrand Russell placed at the heart of our flourishing, the “fertile solitude” Adam Phillips recognized as the pulse-beat of our creative power. 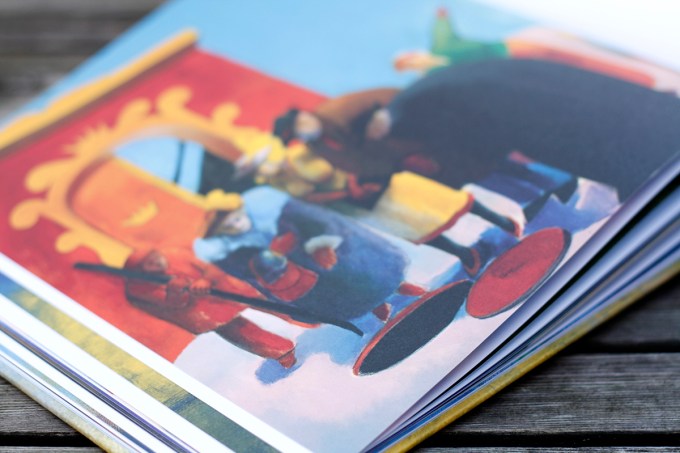 Giuliano Cucco (1929–2006) was still a boy, living with his parents amid the majestic solitudes of rural Italy, when the common loneliness of childhood pressed against his uncommon gift and the artistic impulse began to emerge, tender and tectonic.
Childhood is one great brush-stroke of loneliness, thick and pastel-colored, its edges blurring out into the whole landscape of life. 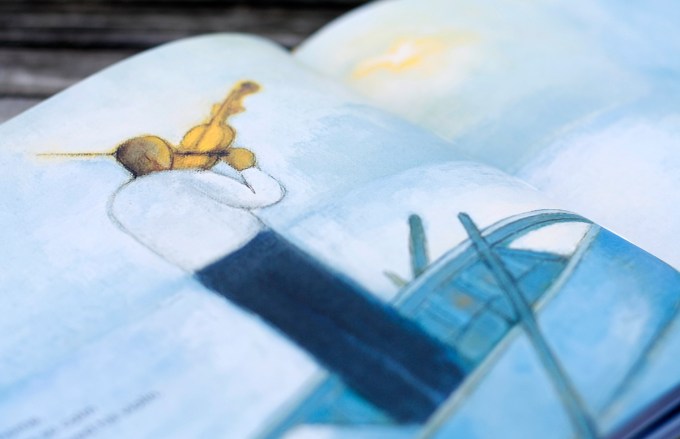 From then on, I knew I would grow up to be an artist. 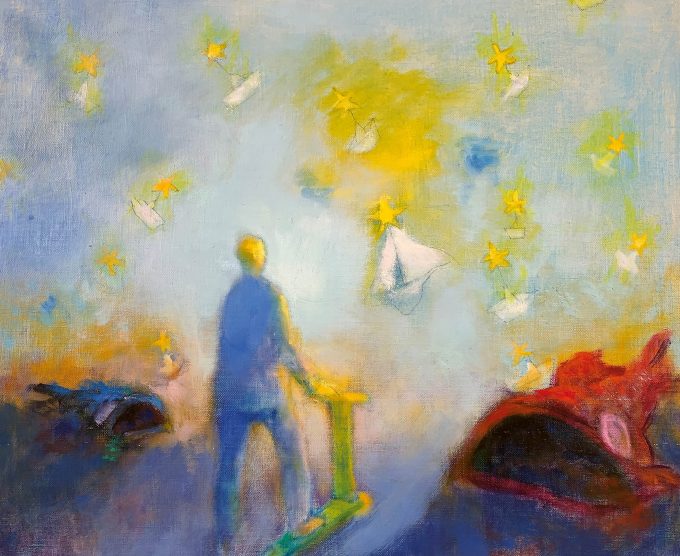 Their son had just begun making his way through a trove of his father’s paintings — many unseen by the world, many depicting the landscapes and dreamscapes of childhood that shaped his art.
When Cucco moved to Rome as a young artist, he met the young American nature writer John Miller. A beautiful friendship came abloom. Those were the early 1960, when Rachel Carson — the poet laureate of nature writing — had just awakened the modern ecological conscience and was using her hard-earned stature to issue the radical insistence that children’s sense of wonder is the key to conservation. 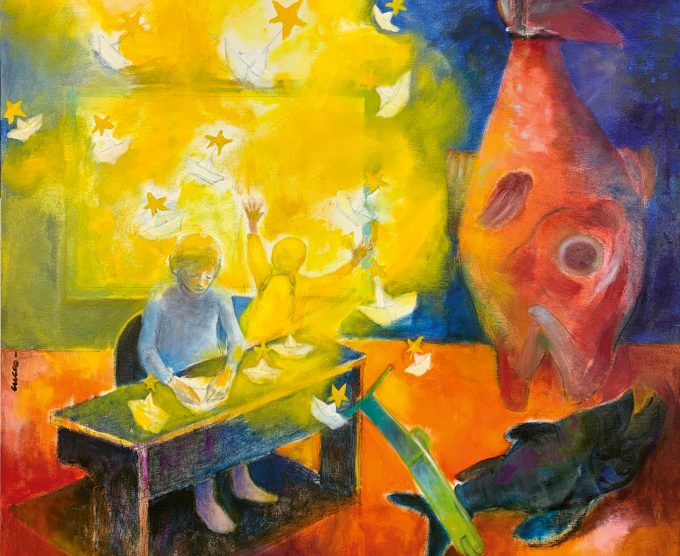 Rilke, contemplating the lonely patience of creative work that every artist knows in their marrow, captured this in his lamentation that “works of art are of an infinite loneliness” — Rilke, who all his life celebrated solitude as the groundwater of love and creativity, and who so ardently believed that to devote yourself to art, you must not “let your solitude obscure the presence of something within it that wants to emerge.” 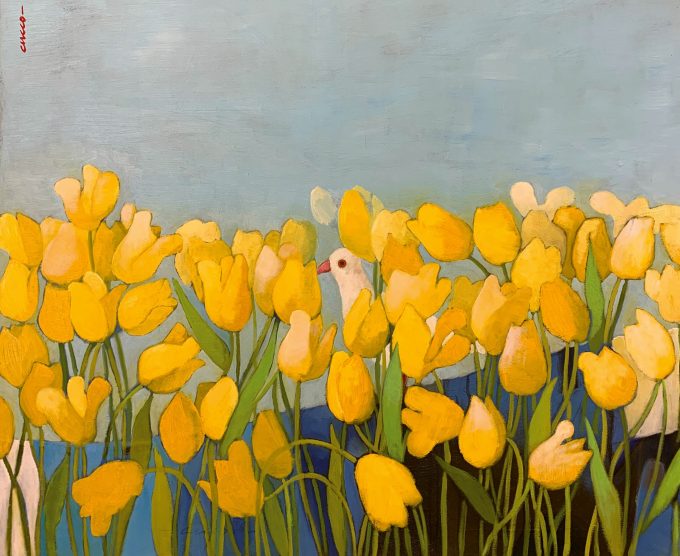 But when Miller returned to New York, door after door shut in his face — commercial publishers were unwilling to invest in the then-costly reproduction of Cucco’s vibrant art. It took half a century of countercultural courage and Moore’s law for Brooklyn-based independent powerhouse Enchanted Lion to take a risk on these forgotten vintage treasures and bring them to life.
We feel the boy’s imaginative loneliness deepen when we encounter his father, brilliant and remote — “a scientist who studied where light came from — not sunlight, but another kind of light he said was inaccessible,” and who talked little and “preferred to ride his bicycle to the ocean and row out among the waves in a tippy row boat, looking for the light.” 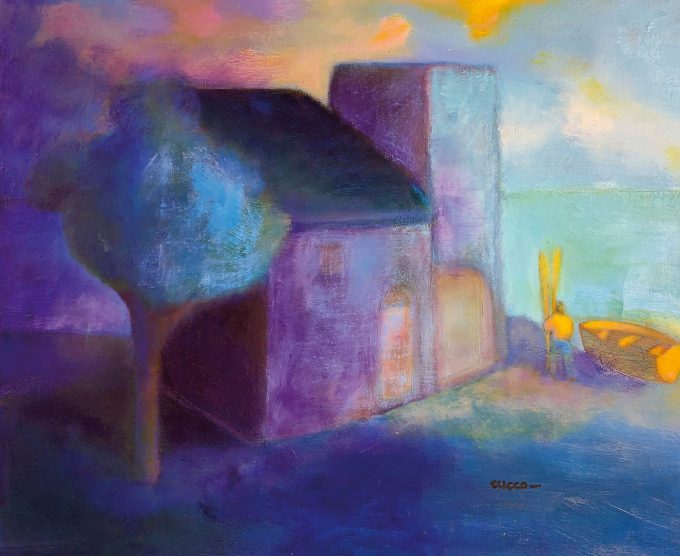 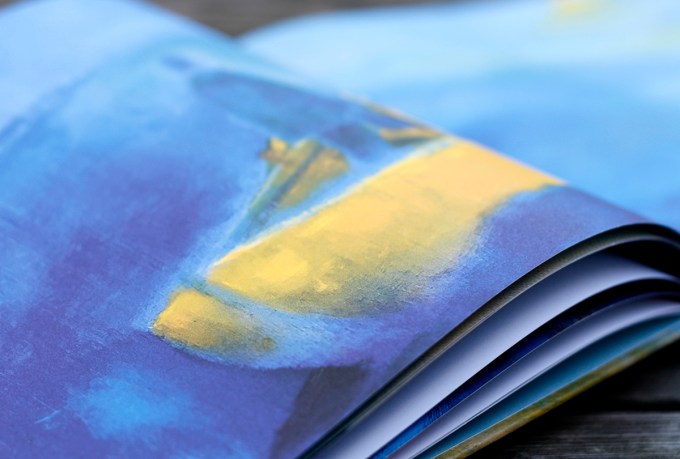 Before I Grew Up (public library) was born — part elegy and part exultation, reverencing the vibrancy of life: the life of feeling and of the imagination, the life of landscape and of light, the life of nature and of the impulse for beauty that irradiates what is truest and most beautiful about human nature.
My father wasn’t much of a talker, but this time he said these three words: “Yes, you did.” 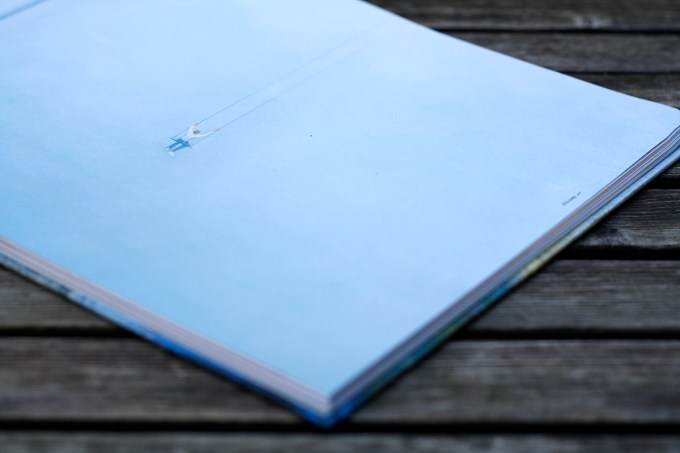 Here’s a picture I painted from what he told me.
After, I asked him if I had painted the light he was seeking.
Complement Before I Grew Up — to the lyric splendor and tactile vibrancy of which no summation or screen does justice — with the illustrated life of Corita Kent, another underheralded artist of uncommon vision and largeness of heart. For a science counterpart, savor the illustrated life of Edwin Hubble, who revolutionized our understanding of the universe with his search for a different kind of light.
In spare, lyrical first-person narrative spoken by the half-real, half-imagined boy becoming an artist, Miller invokes the spirit of Giuliano’s childhood. Emanating from it is the universal spirit of childhood — that infinity-pool of the imagination, which prompted Baudelaire to declare that “genius is nothing more nor less than childhood recovered at will.”
Over the decades that followed, he grew volcanic with painting and poetry, with photographs and pastels, with art ablaze with a luminous love of life.
One day, when the boy is twelve, his father rows out to the ocean to look for his invisible light and returns with a tale of water so calm that he stood up in his tippy row boat and played his violin.

If we are lucky enough, or perhaps lonely enough, we learn to reach out from this primal loneliness to other lonelinesses — Neruda’s hand through the fence, Kafka’s “hand outstretched in the darkness” — in that great gesture of connection we call art. 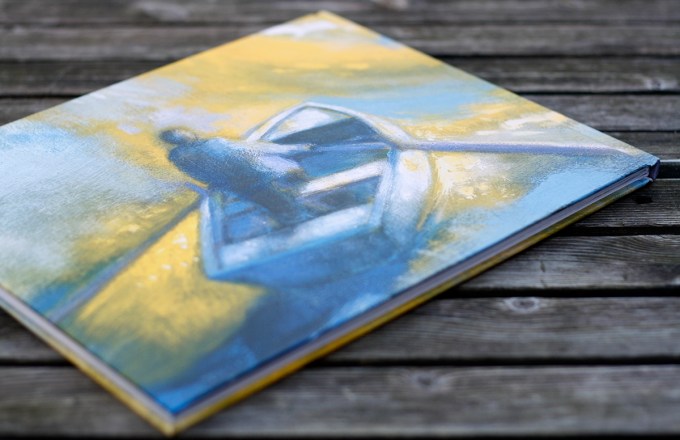 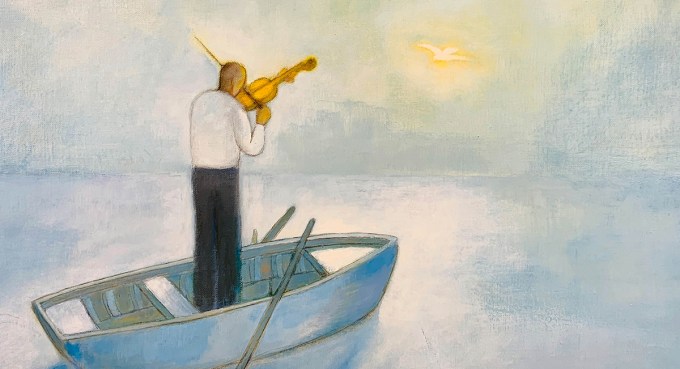 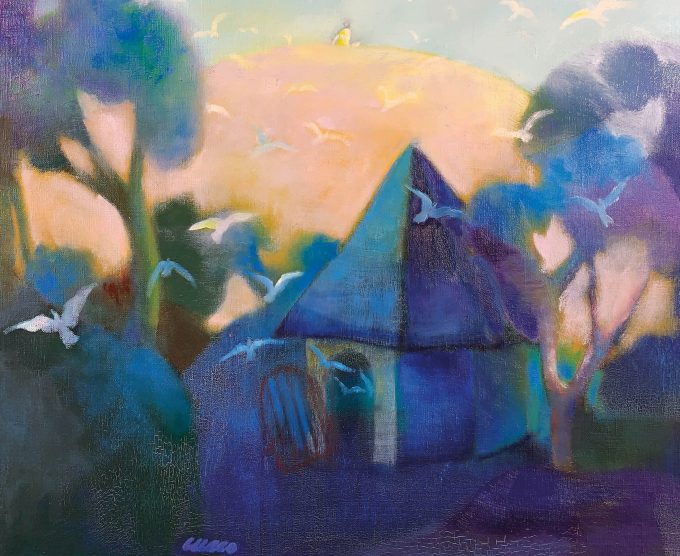 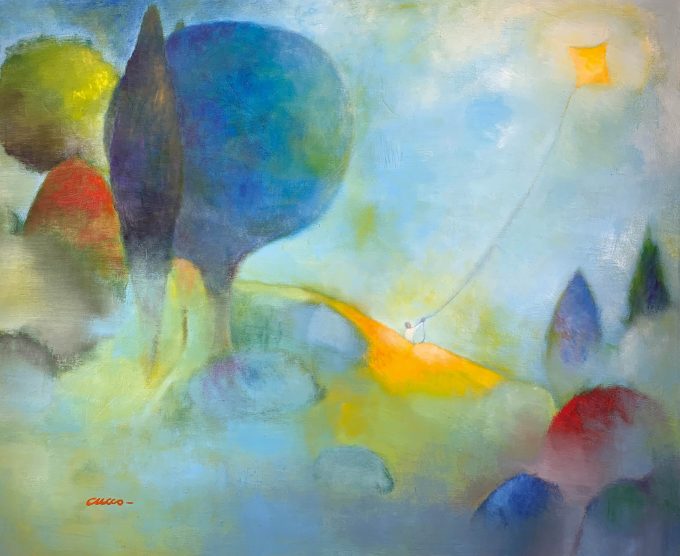 Eager to reconnect with his old friend and share the exuberant news, Miller endeavored to track down Cucco’s family. But when he finally reached them after a long search, he was devastated to learn that the artist and his wife had been killed by a motor scooter speeding through a pedestrian crossing in Rome. 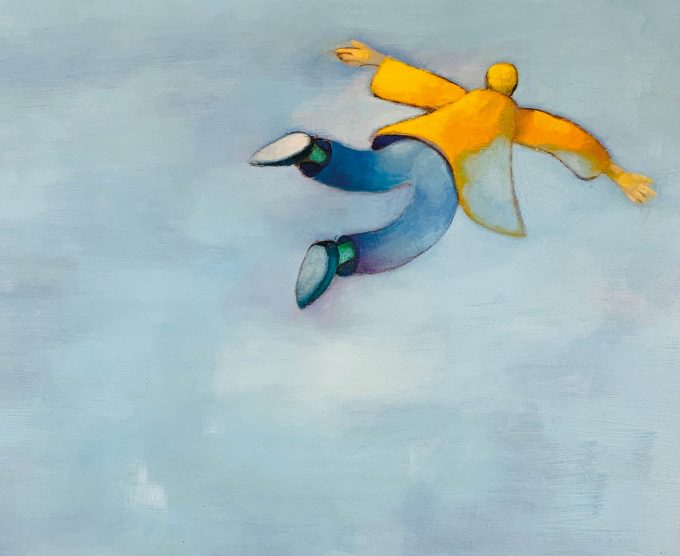 But then his parents decide to send him to city, so that he may learn the life of culture. Staying with his aunt and uncle, watching the adults busy themselves with the attractive distractions of adulthood, he once again travels to wondrous worlds in his imagination.
In a gust of gladness, the boy returns to the country to meander between far-neighboring houses, to climb rooftop towers, to fly his kite into the light.
From this static scene depicted in one of Cucco’s real paintings, from the known facts of his friend’s life, in the voice of the boy about to be lit up by his creative calling, Miller’s soaring imagination conjures up a larger poetic truth about what it means to be an artist, about the meaning of love and the measure of enough, about the slender strands of assurance that weave the lifeline of the creative spirit.
The mother never appears, in the paintings or in the story. But her garden is a refuge where the boy goes to watch tulips bloom. “There, I was never lonely,” he says in that way of self-persuasion we have with reality. 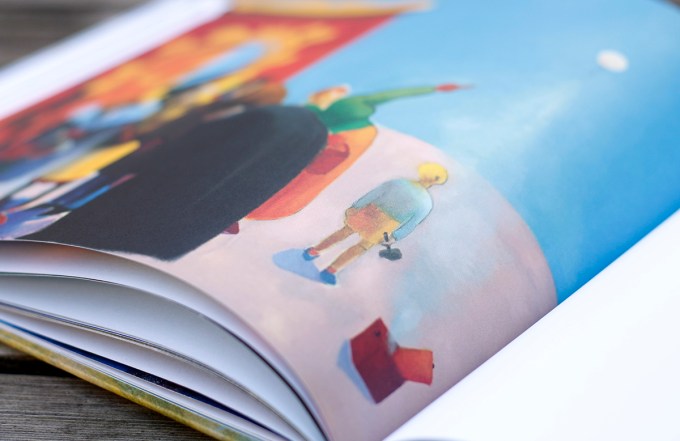 Into this cultural atmosphere, Cucco and Miller joined their gifts to create a series of stunning and soulful nature-inspired children’s books. 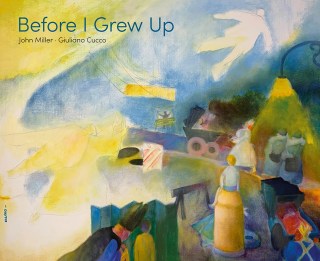 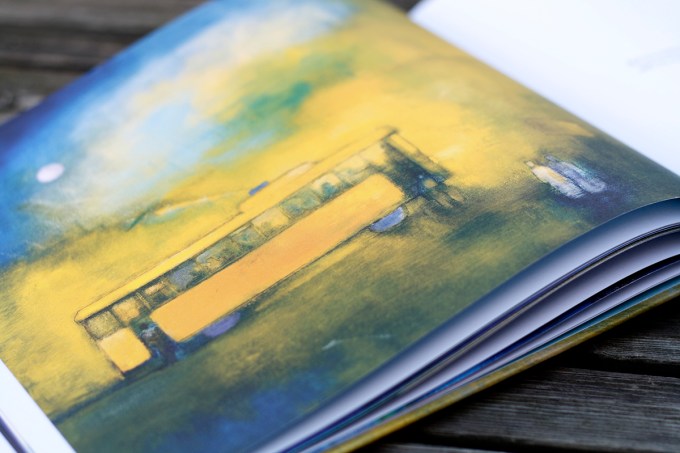 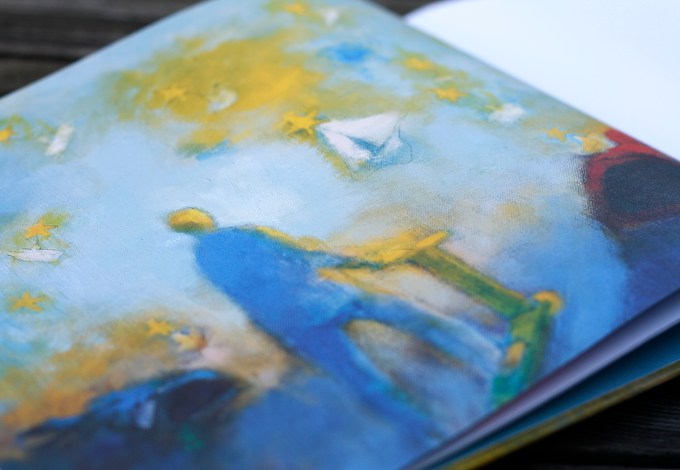 In my room, I had my own workbench, where I made paper boats and let them float away like dreams.
Because grief is so often our portal to beauty and aliveness, Miller set out to honor his friend by bringing his story to life in an uncommonly original and tender way — traveling back in time on the wings of memory and imagination, to the lush and lonesome childhood in which the artist’s gift was forged, projecting himself into the boy’s heart and mind through the grown man’s surviving paintings, blurring fact and fancy.
Illustrations courtesy of Enchanted Lion Books. Photographs by Maria Popova.