We have recently revised our major, precisely in response to declining enrollments, in ways that we believed would preserve our FTEs and fill rates when they began dropping across the college. Those revisions have been largely successful as, again, the data show. But that means that two of the three options we are given to get out of probation are simply irrelevant to our program, leaving us with the only one they really mean to offer anyway: to discontinue the major.  That this is the intent is further indicated by the “recommendation” that the department be “dissolved”.
Indeed, they make a compelling case that “provisionary status” designation is really a death sentence for the department, and that the “process” the adminstration is putting the department through is just there to provide an ex post rationale for killing philosophy.
Regarding the number of philosophy majors, the department says the recent decrease:
The terms of those “provisions” make it abundantly clear that the termination of the program is imminent. That is, “provisionary status” is really a death sentence for the major. This is further confirmed by the “recommendation” that the department be dissolved and the faculty merged with some other department by the end of the semester.
You can learn more here. I urge readers to sign the petition in support of the department here.
A petition has been launched to save the philosophy major program and the department. It calls for both the decision to place the philosophy major at SUNY Potsdam on “provisionary status” and the plan to dissolve the department to be rescinded. You can read and sign it here.
Among the points the department offers as part of their defense are the following:
correlates perfectly with the collapse of faculty lines from 5 FT faculty in 2011 (and 32 majors) to 2 presently (and 3 majors). At the same time total enrollment in the college dropped from 4395 (3952 UG) in 2011 to 3084 (2842 UG) in 2020, so the number of fish in the pond has gotten smaller along with the number of fisher-folk. Nevertheless, we believe that answering our pleas for a replacement for even one of our two more recent retirements would have gone a long way towards beginning to ameliorate the decline in majors. But that was not to be.

We have been informed by upper administration, in the Academic Affairs Realignment Report they shared with Faculty Senate on February 17th, 2022, that the philosophy major program is included on a list of programs determined to go into “immediate provisionary status” (it appears we were spared “immediate discontinuation”).
The Department of Philosophy says that it is “one of the, if not the most productive, efficient, and cost-effective department(s) in the School of Arts & Sciences, and hence at SUNY Potsdam, by all measures except current number of majors,” and argues that this shows that the “proffered justification for realignment in the first place, viz., financial stability,” does not speak in favor of eliminating the major or the department.
That’s David Curry, professor of philosophy at the State University of New York at Potsdam. According to a website that members of the department created to share details of their situation:
Intentionally or not, the department has been deprived of any sustenance for years, in spite of its having a long track record of being a model of productivity, efficiency, and low cost. Now that we are looking a bit ill from that lack of sustenance, we are dutifully informed that if we don’t get better soon, we’ll have to be put out of our misery. Were it not happening to us, we could perhaps better admire the Kafkaesque nature of the whole debacle.
To be utterly explicit: intentional or not, being put on “provisionary status” and slated for dissolution will inevitably result in the discontinuation of the philosophy major.  For no good reason, we have been directed to reach an arbitrary threshold of majors within a very short timeframe. Due to short staffing, this threshold would likely have been out of reach even if we were not further hindered by the almost immediate dissolution of the department. This process has been a sham from the beginning.
“Our department is being threatened with elimination even though by all measures, except number of majors, we excel.”
In general, the department says, “our high faculty to student ratio across a wide range of general education courses enhances the overall productivity of the institution, and our major offers substantial value-add at little to no extra cost. Cuts to the philosophy program would worsen, rather than improve, the financial standing of the college as a whole.” 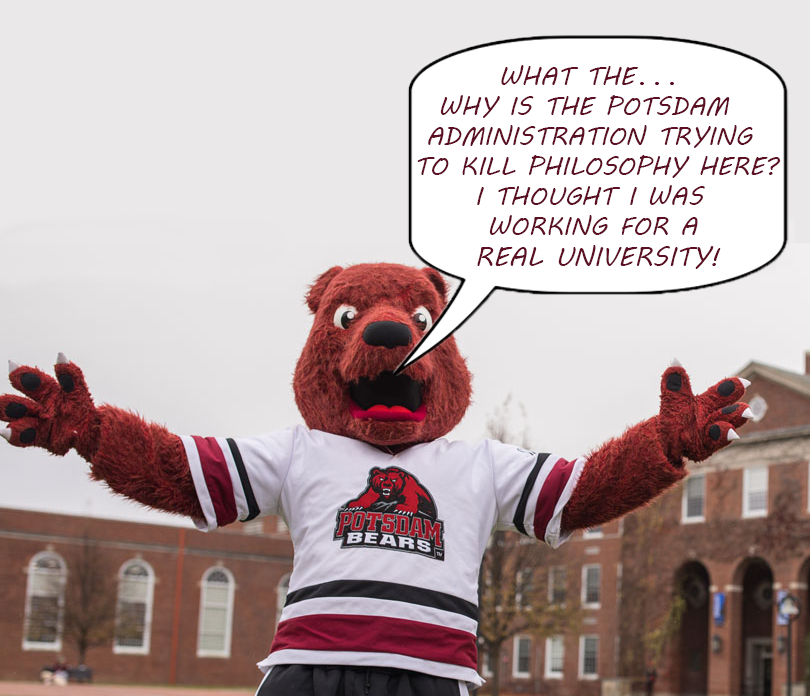