We are told that the best proof of sincere contrition is to acknowledge our faults; and this is what I wish to do. Let us now draw a veil over the whole affair, learning one lesson from it… When friends are at variance, it is always better to employ no mediator, but to communicate directly with each other.
A teenager himself, Beethoven was practically adopted by the family, whom he would later recall as “the guardian angels” of his youth. It was the first nurturing home he ever had. He dined there day after day, slept over many nights, feasted on the volumes of Shakespeare and Homer in the lavish library, and frequently played Bach, Mozart, and Haydn, as well as his own improvisation, for the regular salons held at the Breuning house.
And yet Beethoven, in the spirit of true repentance, took care not to make excuses for the rift:
In the early autumn of 1793, six weeks before his twenty-third birthday, he wrote:
Whatever transpired between the two, a year later, having left Bonn for Vienna, he set out to make amends in a genuine way that would have made Maimonides proud.
In the late 1780s, as the air of revolution was swarming Europe, the young Ludwig van Beethoven (December 16, 1770–March 26, 1827) took improbable refuge in Bonn as a piano teacher to a kindly widow’s children. Her husband had died trying to save court documents in a fire when she was twenty-seven and had never remarried, raising their four children by herself — children she was determined to equip with all possible access to life’s beauty, despite, and perhaps because of, their early lashing of loss. Under her wing, the Breuning family became one of the most cultured in Bonn, animated by a passionate love of literature and the arts. When the children entered adolescence, she decided to hire a piano teacher to refine and magnify their love of music.

I like to imagine him wearing her embroidered neckcloth the night he finally premiered his Ode to Joy, having triumphed over its three-decade creation.

Completely surprised, he teared up to receive the gift, then wrote to her bittersweetly:

My sole wish is that the work were greater and more worthy of you… Oh! if it only gives you pleasure, my wishes will be fulfilled. May it in some degree recall the time when I passed so many happy hours in your house! Perhaps it may serve to remind you of me till I return, though this is indeed a distant prospect. Oh! how we shall then rejoice together, my dear Eleonore! You will, I trust, find your friend a happier man, all former forbidding, careworn furrows smoothed away by time and better fortune.

Eleonore wrote back. Although the letter does not survive, she enclosed in it a gift of her own as a token of forgiveness — not a waistcoat, but a beautiful hand-embroidered neckcloth, the kind Beethoven wears in each one of his subsequent portraits.

With an eye to the damaging ways in which third parties can deepen the wounds between two people, he added:

Along the way, he developed an especially strong bond with one of the siblings, Eleonore, a year younger than him — a bond tinted with feelings beyond friendship.

In one of those vast unrecorded interludes that pock all biography, only refractions of which can be glimpsed in letters, only a fraction of which survive, Eleonore and Ludwig’s relations reached some kind of breaking point. We only know that Beethoven had a notorious temper even before he began losing his hearing, that his furies savaged him with shame, and that he felt he had acted toward Eleonore in a way “degrading” to himself.

Then, a curious psychological twist: Referencing a waistcoat Eleonore had once knitted for him, he asked her to knit him a new one because “change of fashion has made it look so antiquated.” Consciously or not, Beethoven was employing Benjamin Franklin’s ingenious strategy for turning enemies into friends — that peculiar reverse-psychology way in which doing a favor makes us feel more favorably toward its object. He ended the letter with an appeal beyond the customary pomposities of epistolary etiquette:

You would make me very happy by soon writing me a kind letter. If mine cause you any pleasure, I promise you to do as you wish, and write as often as it lies in my power; indeed everything is acceptable to me that can serve to show you how truly I am your admiring and sincere friend,
He included the manuscript of the sonata he had promised her.

As a token of his affection and contrition, he vowed to dedicate to her a new sonata, then assured her of his reformation — the second piece, after repentance, necessary for forgiveness:
Welcome as the gift was, it awakened within me feelings of sadness. Its effect was to recall former days, and to put me to shame by your noble conduct to me. I, indeed, little thought that you still considered me worthy of your remembrance… Little as I may deserve favor in your eyes, believe me, my dear friend, (let me still call you so,) I have suffered, and still suffer severely from the privation of your friendship.

Although their lives unfolded along very different paths — Beethoven grew deaf and threw himself into music even more obsessively, which is always, as Nick Cave would observe two centuries later, an artist’s best “living amends” — they remained obliquely in each other’s lives, Eleonore’s brother becoming one of Beethoven’s few lifelong friends.

My highly esteemed Eleonore, my dearest friend… The most vivid remembrance of you is ever present with me. I have often conversed in thought with you and your dear family, though not always in the happy mood I could have wished, for that fatal misunderstanding still hovered before me, and my conduct at that time is now hateful in my sight. But so it was, and how much would I give to have the power wholly to obliterate from my life a mode of acting so degrading to myself, and so contrary to the usual tenor of my character!
Many circumstances, indeed, contributed to estrange us, and I suspect that those tale-bearers who repeated alternately to you and to me our mutual expressions were the chief obstacles to any good understanding between us. Each believed that what was said proceeded from deliberate conviction, whereas it arose only from anger, fanned by others; so we were both mistaken. 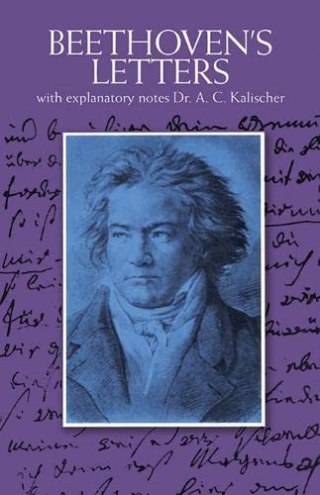