Many experts though still aren’t convinced voting by app or through a website is a good idea, beyond the small programs already created for disabled people, expats and military service members.
We may not be able to vote by text or on a website, but in 2018, West Virginia did attempt to allow voting by app. The program, created by a company called Voatz, was designed to help military service members overseas cast their ballot. To use the app, voters had to register by taking a photo of their government-issued ID and uploading a selfie video of their face. Facial recognition software then made sure the person in the video matched the person depicted on the government ID, and listed in voter records. People in 31 countries were able to vote back then using the app.
If there are large-scale efforts to disrupt the election by tricking people into thinking they can vote by text or by some other method, we may not learn about it until after Election Day.
There’s also the potential for threats from countries like Iran and Russia, which have obtained voter registration data in the past.

The reason I’m writing this is that in the past few elections, hackers and online trolls have reportedly tried to disenfranchise voters by promoting false voting alternatives like text messaging, to effectively trick people into not actually casting their ballot.
Thankfully, there aren’t any concrete examples of significant hoax voting campaigns this year, but it has happened before. Most notably, during the 2016 election some Twitter accounts tried to trick people into texting a number to record their vote. “Avoid the line,” the tweet read.
“We’re a very long way away from a place to make sure we could use the technology to vote safely,” Sarah Brannon, managing attorney with the American Civil Liberties Union’s Voting Rights Project, said during the last election cycle.
“We’ve been working for years as a community to build resilience in our election infrastructure and today that infrastructure remains resilient,” FBI Director Chris Wray said in a statement during a 2020 press conference after Iran appeared to use voter data to send fake emails to voters in an effort to intimidate them. “You should be confident that your vote counts.”
West Virginia dropped its app plans in 2020, though, after researchers at the Massachusetts Institute of Technology said the Voatz app had “significant security flaws.” Voatz responded at the time that all the pilot programs it had participated in had been “conducted safely and securely with no reported issues.”
Of course, 2022 is turning out a little different. Elon Musk has taken over at Twitter after spending months threatening all manner of changes to moderation policies and the way the company operates. He closed his billion purchase of the company on Oct. 27, beginning with firing top executives. He’s since said he won’t make any major changes to moderation or banned accounts until after Election Day.

Election officials and cybersecurity experts have been working overtime to strengthen our voting system against cyberattacks and election meddling. Meanwhile, Facebook, Twitter and Google have tightened rules on political ads.
But that works only if you actually vote.

If you didn’t know that, now you do. If you did know it, good. Now tell your friends.
But there’s still a chance trolls will try to strike at the 2022 midterm elections. Earlier this month, two right-wing operatives pleaded guilty to arranging thousands of robocalls intended to discourage residents from minority neighborhoods from voting. Last year, another far-right influencer and Trump supporter pleaded guilty and was sentenced to more than four years in prison for circulating messages on Twitter that encouraged voters for Democrat Hillary Clinton in 2016 to “Avoid the line. Vote from home.” Meanwhile, election deniers in office or running for office are worrying researchers, who say they’re among the country’s biggest threats now.

It makes sense that a scam to trick people into “voting” by text would be so effective. For years, viewers cast millions of votes for their favorite singers on the hit reality show American Idol. And many of those Idol votes were cast via text. Fooling people into thinking that some technological wizardry like an app, website or text message will record their vote is just the latest gambit in the centuries-old practice of voter suppression. Though it’s less overt than threatening voter safety or straight-out refusing to let someone cast a ballot, it has the same effect. And for people who don’t understand the limits of tech, and the limited ways we’re using it in our elections, this bit of trickery could lead people to accidentally throw away their chance to have a say.
For the vast majority of people, the only way to vote is by going to the polls or by using a mail-in ballot. The good news is that the word appears to be getting out. More than 36 million people have already cast ballots in early voting.
No, you can’t vote by tweet. Or by text message. Or through WhatsApp. Or, except for a few rare exceptions, over the internet at all.
In 2020, Facebook and Twitter took steps to avoid a repeat, banning political ads in the final days before Election Day. 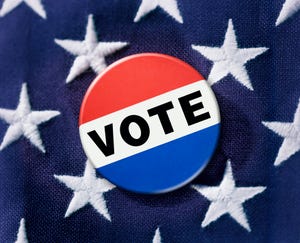